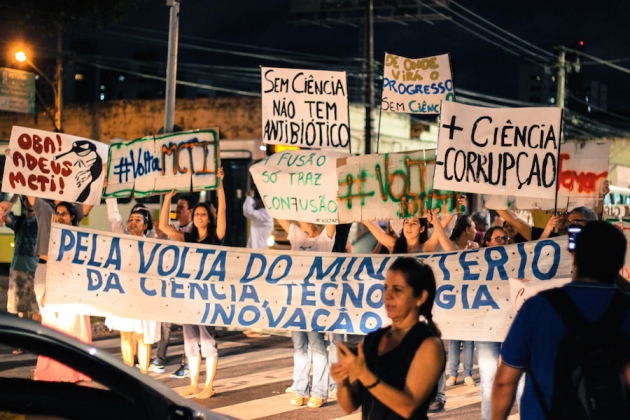 Brazilian researchers protest in Natal against the downgrading of their science ministry.

Brazil’s scientists have been taking to the streets to protest against last month’s demotion of their country’s science ministry (MCTI) – but politicians say the demonstrations won’t change the controversial decision.

The protests followed an efficiency drive by interim president Michel Temer, who took office in May after Dilma Rouseff was impeached. He angered researchers by merging the MCTI with a telecommunications ministry. The move was part of a bid to cut public expenses, Temer said: overall, he cut the number of ministries in his cabinet from 32 to 22.

Researchers, already struggling with massive funding cuts, saw the move as weakening the status of science, which has had its own cabinet ministry for most of the past three decades. “The government is signaling that science is unimportant and shall remain so”, says Sergio Rezende, a physicist at the Federal University of Pernambuco in Recife, who was science minister from 2005 to 2010.

Within days of Temer’s action, the culture ministry — which he also demoted — was reinstated after protests by artists. Inspired by that action, some researchers launched the Internet campaigns #VoltaMCTI (“come back, MCTI”) and #FicaMCTI (“stay, MCTI”) and scheduled demonstrations. In Natal, 200 people, some in white lab coats, some wearing paper masks of Temer and Albert Einstein, demonstrated on 2 June. In a protest in Rio de Janeiro two days later, a banner carried a picture of the interim president with the words, “Without science there’s no Viagra”. (Temer, 75, is married to a beauty queen 32 years his junior.) This week, protests continued in university campuses and outside national labs and public buildings in Rio, Porto Alegre, Brasília, Belo Horizonte, Petrópolis and Belém.

“We’re not as quick to mobilize ourselves as artists, but we’ve been against the merger right from the start”, says physicist Ildeu Moreira, vice-president of the Brazilian Society for the Advancement of Science (SPBC) in São Paulo, and one of the organizers of the #FicaMCTI campaign. As part of the protest, several prominent scientists have changed the picture in their profiles in the national online academic registry, substituting the campaign’s hashtag. Among them is mathematician Artur Avila, winner of the 2014 Fields Medal, who said in a video recorded for the campaign that merging two unrelated ministries “goes against the notion that science and technology are key for Brazil”.

Gilberto Kassab, the new minister of the science–communications superministry, says there’s no going back. “I believe the ministry has become stronger, with more political weight given by the fusion”, he told Nature. On 8 June, for example, he told the SBPC that his ministry would now be able to spend 1 billion reais (US$350 million) that Rouseff’s administration had withheld from MCTI’s 4.2-billion-reais budget for 2016 to help to relieve the country’s fiscal deficit.

Kassab also said that he would negotiate a US$1.4-billion loan with the Inter-American Development Bank to revive science spending — a measure previously proposed and approved during the Rouseff administration, but which needed to be renegotiated by the new government after Rouseff’s impeachment.

Scientists are pleased with these announcements, but say it will take more than that to charm them. “My opinion is that the protests will continue”, says physicist Tatiana Rappoport at the Federal University of Rio de Janeiro. If anything, she says, the demonstrations are getting stronger.