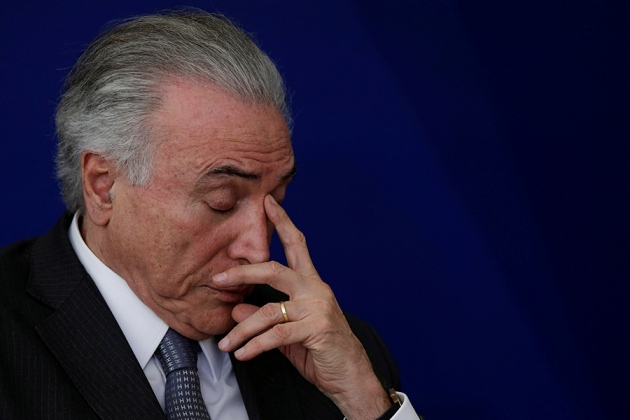 Brazil’s science budget has shrunk by more than 40% in the past 3 years. But researchers are now trying to escape an even worse crisis: federal science spending could be frozen at its current low level for the next two decades, under a constitutional amendment to cap public spending to inflation-level rises.

On 16 November, 19 institutions representing higher education and research sent a letter to Brazil’s Senate asking that politicians exclude science and education from the amendment, which is President Michel Temer’s top legislative priority as he aims to halt the country’s spiralling fiscal crisis. The amendment passed the lower house of Brazil’s National Congress last month; the Senate is due to vote on it by the end of this month.

If Temer’s legislation does end up constricting federal science spending, “it will be the end of science in Brazil”, warns physicist Luiz Davidovich, who is president of the Brazilian Academy of Sciences in Rio de Janeiro, which co-authored the letter.

Last month, scientists joined protests in Rio and other cities against the amendment, which they called the #PECdoFimDoMundo (amendment of the end of the world).

Brazil’s public spending does need to be reined in, says Carlos Américo Pacheco, chief executive of the São Paulo Research Foundation, a state science-funding agency. “It’s a bitter medicine, but it’s inevitable: you won’t be able to fix public finance without a major effort to cut expenses,” he says.

But scientists say that they’ve had enough pain. In 2013, the science ministry budget stood at 7.9 billion reais (US$2.3 billion). After the economy slumped, it has now fallen to 4.6 billion reais — the lowest level in 7 years (see ‘Funding nosedive’), and the lowest in a decade when inflation is accounted for. And that includes the budget of the communications ministry, which Temer merged with the science ministry to create the Ministry of Science, Technology, Innovations and Communications (MCTIC) when he took office in May. 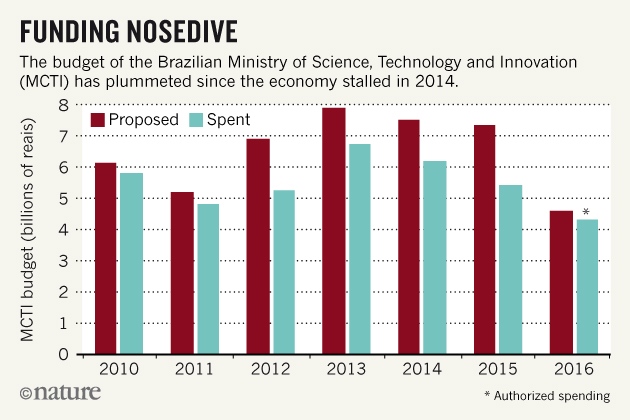 As a result of the cuts, some Brazilian scientists have left the country; others are making do on less funding. And officials at major planned facilities such as the 850-million-real Multipurpose Research Reactor outside São Paulo — which aims to generate medical radioisotopes — and the 1.75-billion-real Sirius synchrotron, in Campinas, have complained that they haven’t yet received their 2016 funds.

Freezing the science budget at these low levels could be disastrous, says Helena Nader, president of the Brazilian Society for the Advancement of Science. Federal science spending is currently around 1.1% of Brazil’s gross domestic product (GDP), but that figure will fall if spending is frozen and GDP grows over the coming years. Nader compares that with science spending in China, which is planned to grow from 2.1% of GDP now to 2.5% in 2020.

The MCTIC says that the amendment will not necessarily affect the science budget. Science might even get more money — provided that other areas of federal funding get less. But critics say that’s unlikely in a country with other pressing needs, including chronically underfunded public education and health and a collapsing pensions system.

MCTIC minister Gilberto Kassab is trying to increase the science budget ahead of the amendment. His 2017 request, included in a government proposal that has not yet been voted on by Congress, would increase the budget by 28% to 5.9 billion reais.

“The MCTIC has managed to include in the annual budget a value that’s enough to meet the needs of the sector,” a spokesperson told Nature.

Davidovich disagrees. He says that, after accounting for inflation, research needs at least 10 billion reais to match the federal science spending levels of three years ago — so it is well under par.

To scientists’ further dismay, the National Council for Scientific and Technological Development — a federal funding agency — has been further demoted within the new structure of the MCTIC. The council used to be an independent body whose president would report directly to the science minister; now it and other institutions such as the Brazilian Space Agency will report to a director who in turn will report to a vice-minister for science. “We [science] have been shoved to the fourth level,” says Nader.

The political downgrading will make it harder for the council to fight for resources, say Nader and Davidovich. Last month, the Brazilian Society for the Advancement of Science and the Brazilian Academy of Sciences delivered a joint letter to Kassab protesting against the move. The minister said that he would review the changes in January.

For now, Brazilian science faces a cloud of uncertainty. As researchers have asked, the amendment could be altered to spare sensitive areas such as education and research. Senators might also try to spare a specific slice of the MCTIC budget that comes from the revenue of some businesses (such as oil and telecommunications), Davidovich thinks. It is hard to predict how the amendment might unfold in the Senate, he says. “But then again, someone has said that, in Brazil, even the past is unpredictable.”

An earlier version of this article stated only the construction costs of the Sirius synchrotron. The total cost has now been clarified.