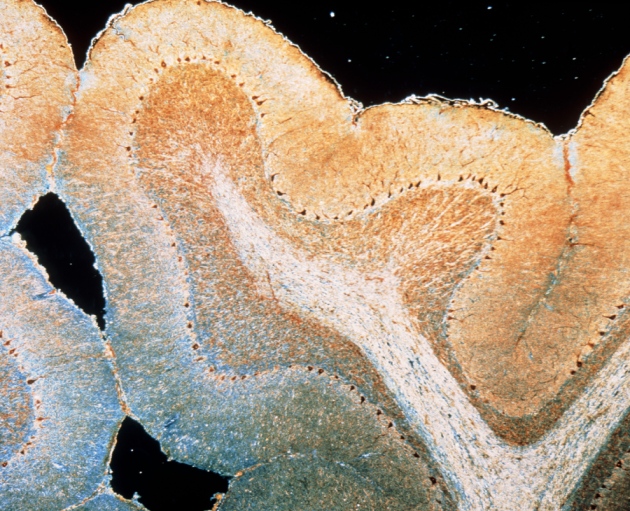 Computer programs are being developed to stitch together images of brain slices to map neural circuits.

As US science agencies firm up plans for a national ten-year neuroscience initiative, California is launching an ambitious project of its own. On 20 June, governor Jerry Brown signed into law a state budget that allocates US$2 million to establish the California Blueprint for Research to Advance Innovations in Neuroscience (Cal-BRAIN) project.

Cal-BRAIN is the first state-wide programme to piggyback on the national Brain Research through Advancing Innovative Neurotechnologies (BRAIN) initiative announced by US President Barack Obama in April 2013 (see Nature 503, 26–28; 2013). The national project is backed this year by $110 million in public funding from the National Institutes of Health (NIH), the Defense Advanced Research Projects Agency (DARPA) and the National Science Foundation (NSF).

California researchers and lawmakers hope that the state’s relatively modest one-time outlay will pave the way for a larger multiyear endeavour that gives its scientists an edge in securing grants from the national initiative. “It’s a drop in the bucket, but it’s an important start,” says Zack Lynch, executive director of the Neurotechnology Industry Organization, an advocacy group in San Francisco, California.

Cal-BRAIN sets itself apart from the national effort by explicitly seeking industry involvement. The proposal emphasizes the potential economic benefits of neuroscience research and calls for the formation of a programme to facilitate the translation of any discoveries into commercial applications.

“It’s been difficult for the national initiative, particularly the NIH, to figure out exactly how to partner with the private sector,” says Story Landis, director of the National Institute of Neurological Disorders and Stroke in Bethesda, Maryland. “In California, there’s a really good history of these partnerships.”

The NIH has so far committed $40 million towards the ten-year national programme, with DARPA contributing $50 million and the NSF adding another $20 million. Many neuroscientists say that this budget is much too small; on 6 June, scientific advisers to the NIH recommended that the agency increase its annual share to ten times the present value by 2020 and to $500 million a year for the five years after that.

The national initiative also involves private institutions, including two in California: the Salk Institute for Biological Studies in La Jolla and the philanthropic Kavli Foundation in Oxnard have committed $68 million over the project’s lifetime.

“It just makes natural sense that California would be involved in a very serious way with the federal effort,” says Democratic state senator Ellen Corbett, who introduced the legal provisions to create Cal-BRAIN.

Google, of Mountain View, California, is particularly interested in working with scientists on brain-inspired computing and on brain-mapping algorithms. The company is already collaborating with the Allen Institute for Brain Science in Seattle, Washington, to design better computer programs for building connectomes — three-dimensional maps of neural circuits — from images of brain slices.

“We would love to one day provide a service to universities in California and perhaps even companies, where they would give us their data, we would process it for them, and provide them with their connectome,” says Thomas Dean, a research scientist at Google.

Many researchers have drawn parallels between Cal-BRAIN and the California Institute for Regenerative Medicine (CIRM), a stem-cell agency in San Francisco. But the analogy is not perfect: CIRM, established in 2004 and intended to support projects then ineligible for federal grants, has enjoyed the security of a $3-billion commitment from the state over ten years. Cal-BRAIN’s $2 million in guaranteed funding is likely to disappear quickly, so its organizers will have to work fast to set up the programme and secure further support.

“Uncertainty of funding, that is the biggest difference between this and CIRM,” says former CIRM science director Arlene Chiu.

The University of California has been tapped to coordinate Cal-BRAIN and to develop a governing structure with help from other universities, laboratories and businesses. The governing body would then craft a scientific plan and establish a competitive grants programme. Brooke Converse, a spokeswoman for the university, says that it is too early to reveal who might be involved in the planning process, how much of the budget would be spent on administration and how much would be left for grants.

“I don’t think it’s going to fund a lot of research, but it may be a way of starting to get organized,” says Ralph Greenspan, associate director of the Kavli Institute for Brain and Mind at the University of California, San Diego.

Other states are watching with interest. In New York, scientists have been quietly meeting with lawmakers to discuss a similar initiative. Rafael Yuste, a neuroscientist at Columbia University in New York City whose ideas helped to spawn the US BRAIN Initiative, says that he and other researchers in the state are pushing for a neurotechnology research incubator in New York. “I’m sure that there will be other states that will feel that they need to do this as well,” says Landis.