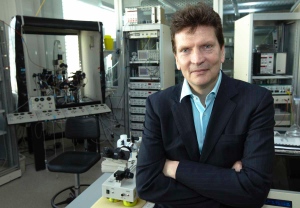 Henry Markram is co-director of the Human Brain Project, one of two programmes to win €500 million of European funding.

After a two-year contest, the European Commission has selected two research proposals that it will fund to the tune of half-a-billion euros each.

The Human Brain Project, led by Henry Markram, a neuroscientist at the Swiss Federal Institute of Technology in Lausanne, plans to use a supercomputer to recreate everything known about the human brain — a hugely ambitious goal that has been met with some scepticism (see 'Brain in a box').

The other project, called Graphene, is led by Jari Kinaret, a theoretical physicist at Chalmers University of Technology in Gothenburg, Sweden. It will develop the potential of graphene — an ultrathin, flexible and conducting form of carbon — and related materials for applications in computing, batteries and sensors.

Each project expects to receive €1 billion (US$1.3 billion) over ten years, half to be provided by the European Commission and half by participants. The commission will make a formal announcement of the winners on 28 January.

In 2010, the Future and Emerging Technologies Flagship Initiatives competition put out a call for proposals for projects that would apply information and communication technologies to social problems. Six shortlisted projects were given funding for feasibility studies, and the final winners were selected as the most likely to achieve paradigm-shifting advances.

The Human Brain Project hopes to aid medical advancement in brain disorders; Graphene says that it will lead to development of new materials that will revolutionize computing and telecommunications, for example. The projects will now enter a ‘ramp-up’ phase, each receiving €54 million over 30 months. That represents the last cash available from the European Union’s Seventh Framework Programme, which has funded research since 2006 and expires this year.

Subsequent phases of the Flagship Initiatives will be supported under the European Union's next funding scheme, Horizon 2020, but the structure of that programme is still being negotiated and some observers fear that funds may be scaled back.

Competition winners declined to comment to Nature before the official announcement, although news of the selections had already been reported by Spanish and Italian outlets.

Scientists involved in other shortlisted projects said that the competition had helped them to forge interdisciplinary contacts. Dirk Helbing, a physicist-turned-sociologist at the Swiss Federal Institute of Technology in Zurich, is upbeat about the candidate project that he helped to lead: FuturICT, which proposed to build a global-scale model of human activities and their impact on the environment. ”We created a whole new science for the twenty-first century and we are planning to live on,” says Helbing.