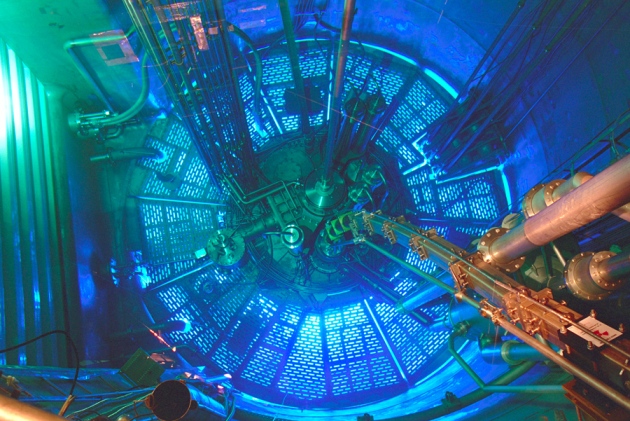 The High-Flux Reactor at the Laue-Langevin Institute in Grenoble, France, produced the neutrons used in an experiment that tested for possible deviation from the known laws of gravity.

When a tennis ball bounces off the ground, you could be forgiven for thinking its movement is smooth. But this is just an illusion. The ball is constantly switching between closely packed quantum states of gravitational energy — so quickly that the transition seems smooth. Now, physicists have measured these transitions by bouncing not tennis balls, but ultracold neutrons to test the laws of gravity over scales no one had studied before.

For everyday objects and over short distances, the gravitational force — whether as described in Newtonian physics or in Einstein's more complicated general theory of relativity — reduces to a simple rule: gravitational energy is directly proportional to height, and tennis balls go up and down tracing parabolas. For a confined particle that has quantum behaviour, such as the neutron, the energy is still proportional to height, but can only exist at particular levels, rather than over a continuum1 (see 'Gravity leaps into quantum world'). Some potential explanations for the mysteries of dark energy and dark matter — which together make up 95% of the Universe — predict subtle deviations from the levels that we would expect if gravity were acting alone.

In this week's Physical Review Letters2, a team led by physicist Hartmut Abele at the Technical University of Vienna shows that the ordinary laws of gravity are still valid even when measured over the scale of a few micrometres. The researchers measured quantized gravitational energy levels with a precision that is 100,000 times better than in previous experiments3.

That precision is sufficient to test some proposed explanations for dark energy — the unknown force that seems to be accelerating the expansion of the Universe. Some models of dark energy put constraints on particular gravity-like forces that would subtly distort the quantum levels at these micrometre scales. “It’s really a beautiful experimental tour de force,” says Geoffrey Greene, a physicist at the University of Tennessee in Knoxville who was not involved in the study.

To obtain neutrons with quantized gravitational energy states, the team used a technique first described in 20114, in which a nuclear reactor produces neutrons travelling at 2,200 metres per second. These are then slowed to less than 7 metres per second and cooled to just a fraction of a degree above absolute zero, before being funnelled between two horizontal plates.

The neutrons bounce off the lower plate, which is a highly polished mirror, while the upper plate is an absorber that creams off those with the highest energies, to leave only neutrons in their lowest quantum state. Neutrons are ideal for these quantum bouncing experiments because they have only weak electrostatic polarization and carry no net electric charge, says study co-author Peter Geltenbort, a physicist at the Laue-Langevin Institute in Grenoble, France, which produced the neutrons for the experiments. “They only really feel gravity,” he says.

In the latest experiment, the team used a piezoelectric crystal to shake the mirror at just the right frequency, which gives the neutrons enough energy to bump up to higher levels. The kick it needs depends on the difference between the levels, which depend on their height and so the pull of gravity between it and Earth. “By measuring the frequency of the vibration, you can measure gravity in the micrometre to millimetre range with very high precision,” says Geltenbort.

The team found that the neutrons' energy levels are exactly as if they are being acted on by gravity alone — measured on a scale 100,000 times smaller than ever tested before. This puts limits on additional 'exotic' forces that some have predicted could be seen on these tiny scales.

'Chameleon' dark energy is one such hypothesized force. It derives its name from the way the range over which it acts is reduced drastically for dense objects, which would account for why we fail to see it in Solar System measurements. Such a 'fifth force', existing alongside the known electromagnetic, strong, weak and gravitational forces, would tweak the neutrons' energy levels from those predicted by gravity alone, says Amol Upadhye, a theoretical physicist at Ewha Womans University in Seoul, who was not part of the research team.

The team’s results put a limit on how strong that force could be. “This limit is one hundred times better than the previous such limit,” says Upadhye. This does not eliminate chameleon theories as possible explanations for the dark energy, he adds. “There are still some seven orders of magnitude to cover … but this goes a long way towards closing that gap.”

The results also constrain the properties of a potential candidate for dark matter, the substance thought to make up 85% of matter in the Universe but which seems to be undetectable except for its gravitational pull at cosmic scales. Very light hypothetical particles called axions would cause a deviation from the ordinary law of gravity at short distances. The absence of such an effect in this latest study limits how strong these interactions could be.

"It's truly remarkable that experiments such as this are possible at all," says Upadhye. The researchers call the technique gravity resonance spectroscopy, because it mirrors other kinds of spectroscopy, which measure the energy states of electrons in the electromagnetic field of an atom. These have found a wide range of uses — from determining the composition of faraway galactic objects to atomic clocks. “This first application of the new technology is a big step," says Greene.