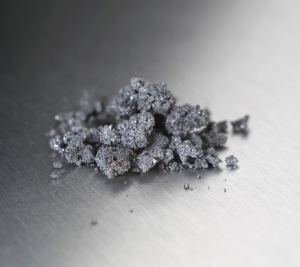 An elite chemical club has a new member, after a team in Germany found a way to link two boron atoms together with a stable triple bond. Boron joins carbon and nitrogen as one of the few elements in the periodic table known to form stable compounds featuring triple bonds1.

Theory had predicted that such boron structures should be possible, says Holger Braunschweig, a chemist at the University of Würzburg who led the research. After all, nitrogen–nitrogen and carbon–carbon triple bonds are stable: the nitrogen molecules that make up the majority of our air are held together by a triple bond, for example. And boron is next to carbon and nitrogen in the periodic table, so should have comparable properties. “One would expect something similar for boron,” says Braunschweig. “The major problem has been the synthesis.”

Until now, the closest that anyone had come was a molecule made by using a laser to vaporize boron in the presence of carbon monoxide (CO) at very low temperatures2. This compound seemed to incorporate a boron–boron triple bond, surrounded by CO groups, but fell apart at temperatures above about -263 °C.

Braunschweig’s compound, by contrast, is stable up to 234 °C, if kept isolated from the air. “Under inert conditions, this is a very stable molecule,” says Braunschweig.

To make the compound, the team swapped CO for bulky, highly electron-donating chemical groups called N-heterocyclic carbenes (NHCs). Atoms of main-group elements are generally most stable when they have eight electrons in their outer electron shells. If they don't have this number as single atoms, they often share with their neighbours, each electron pair constituting a single chemical bond. Boron atoms have only three electrons in their outer shells, so in Braunschweig’s compound, two atoms share all six of their electrons between them to make a triple bond. The remaining two electrons are supplied by NHC groups. 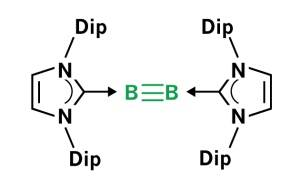 Other research teams have attempted to synthesize boron–boron triple bonds using two boron atoms each bearing one NHC group and three bromines. The idea was that the bromines would be removed one by one, and the two boron atoms would come together to form a boron–boron single bond, followed by a double and finally a triple bond. However, the process of forming the single bond was slow, and the bromine-stripped boron atoms tended to first react with the surrounding solvent before reacting with each other of each other3.

So Braunschweig’s group started with a precursor that already had one boron–boron bond in place: B2Br4, stabilized with two NHCs. “This precursor is a very difficult to work with — it will degrade above -40°C — but we showed that we could selectively convert this compound first to make the boron–boron double bond, and in the second step to make the triple bond,” says Braunschweig.

X-ray crystal structures confirmed that the compound possesses true triple bond character. As expected, the distance between the boron atoms was shorter in the triple-bonded structure than in the compound with a double bond, matching closely with predicted figures. The molecule is also linear, just as the equivalent triple-bonded carbon compound would be.

“Braunschweig has elegantly seen the problem of starting with a mononuclear precursor, and used a precursor with a boron–boron bond already in place,” says Cameron Jones, a chemist at Monash University in Melbourne, Australia, who has worked on theoretical studies of the boron–boron triple bond. The results, he says, although stable under heat, “are highly reactive species, and they will find applications”.

Braunschweig’s team is already investigating the reactivity of the new compound, as well as its potential uses in organic electronic materials. Boron-containing compounds are already used in commercial production of organic light-emitting diodes, for example. “I think it might be a useful building block,” says Braunschweig. “The future will tell us whether this is a good approach.”