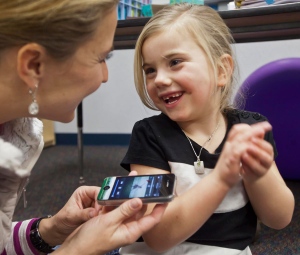 A bone-marrow transplant can treat a mouse version of Rett syndrome, a severe autism spectrum disorder that affects roughly 1 in 10,000–20,000 girls born worldwide (boys with the disease typically die within a few weeks of birth).

The findings, published today in Nature1, suggest that brain-dwelling immune cells called microglia are defective in Rett syndrome. The authors say their findings also raise the possibility that bone-marrow transplants or other means of boosting the brain’s immune cells could help to treat the disease.

“If we show the immune system is playing a very important role in Rett patients and we could replace it in a safe way, we may develop some feasible therapies in the future,” says Jonathan Kipnis, a neuroscientist at the University of Virginia School of Medicine in Charlottesville, who led the study.

Mutations in a single gene on the X chromosome, MECP2, cause the disease. Because they have only one X chromosome, boys born with the mutation die within weeks of birth. Girls with one faulty copy develop Rett syndrome.

Symptoms of Rett syndrome typically set in between 6 and 18 months of age. Girls with the disease have trouble putting on weight and often do not learn to speak. They repeat behaviours such as hand-washing and tend to have trouble walking. Many develop breathing problems and apnoea. Rett syndrome is classified as an autism spectrum disorder, and treatments focus on symptoms such as nutritional and gastrointestinal problems.

The MECP2 protein orchestrates the activity of many other genes, but how its alteration causes Rett syndrome is a mystery. “I wish I knew,” says Kipnis.

Neurons express more MECP2 than any other cell in the brain, and restoring the gene’s function in mouse neurons reverses some disease symptoms2. Recently, however, scientists have begun to suspect that other brain cells are also involved. Re-activating MECP2 in brain-support cells called astrocytes treats gait problems and anxiety in mice3.

Kipnis and his team focused on another class of brain cell — microglia. They are the brain’s macrophages, a type of immune cell that sops up the detritus created by other cells. Studies have linked various immune cells to brain function, including repetitive and compulsive behaviour4, which led Kipnis to test whether replacing an immune system in mice lacking Mecp2 with cells containing the gene could improve symptoms.

Male Rett mice, with no working copy of Mecp2, typically die within two months, but the ones that received bone marrow from healthy mice lived up to a year, Kipnis says. The treated mice breathed easier, walked better and gained more weight compared with untreated mice. Female mice with just one working copy of Mecp2 develop Rett symptoms later than male mice, but a bone-marrow transplant improved gait, breathing and weight gain for them, too.

To determine whether microglia in the brain and not immune cells elsewhere in the body explain the effects, Kipnis’s team gave bone-marrow transplants to Rett mice that did not get a dose of radiation to their brains, sparing the existing microglia. The transplant did nothing for these mice.

Kipnis speculates that microglia from Rett mice have trouble clearing cellular rubbish in the brain, making it more difficult for their neurons to work properly. If this can be established with additional research, clinical trials of bone-marrow transplants may be worth trying, Kipnis says. With the Rett Syndrome Research Trust, based in Trumbull, Connecticut, he has begun approaching bone-marrow transplant centres with this possibility. "This is very, very preliminary," he cautions. "It works fantastically in mice, but we can cure almost anything in mice."

Less drastically, Kipnis thinks that the disease could also be treated with drugs that improve microglia function. Girls with Rett syndrome have one working copy of MECP2, so half of their microglia may work.

Frauke Zipp, a neuro-immunologist at the Johannes Gutenberg University Mainz in Germany, agrees that a clinical trial of cell transplantation to treat Rett syndrome is far afield, but not inconceivable if additional research pins down their role in disease.

“These findings contribute to the idea that Rett syndrome is a very complicated disorder involving multiple cell types and systems,” adds Gail Mandel, a neuroscientist at Oregon Health Sciences University near Portland. Some form of gene therapy may be a way of fixing all these different problems, she says.