There will soon be more black academics in South Africa than white ones, a study of demographic data suggests.

Although more than 80% of the country’s population is black, its academic sector has remained disproportionately white — a legacy of the apartheid era.

But over the past decade, the proportion of black South African researchers has risen steadily: from 26% in 2005 to 35% in 2015, according to the study, which was published1 in Higher Education last month. The proportion of white academics decreased by more than 10 percentage points over the same period, to 49% in 2015 (see 'South African shift').

“Our research shows that transformation is taking place and there are strong indications that it will accelerate in the future, particularly in the next decade,” says David Hedding, a geomorphologist at the University of South Africa in Florida, Johannesburg, and co-author of the paper. 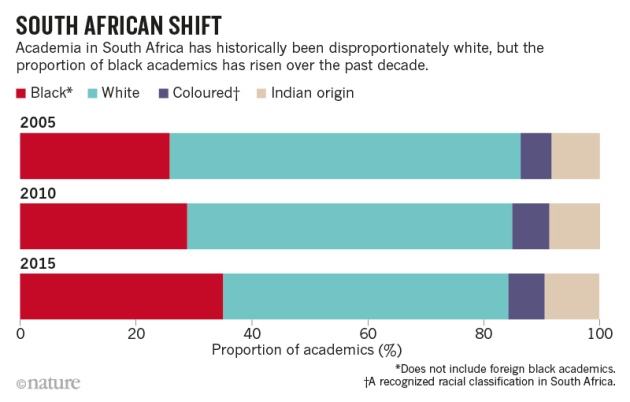 The authors suggest that in the next decade, more than 4,000 researchers — about 27% of the country’s academics, and most of them white men — will retire, which should create opportunities for younger researchers. Black researchers could outnumber white ones some time between 2020 and 2025, they say.

Hedding says that it’s not possible to attribute the change to a specific policy, but that the government should keep doing what it is currently doing. However, he thinks the country should focus more on nurturing PhD candidates and enticing them into academia. He and his co-author, geoinformatics specialist Greg Breetzke at the University of Pretoria, also note that black women, the country’s largest demographic, remain significantly under-represented in universities, accounting for just 14% of academics in 2015.

Charles Sheppard, director of management information at Nelson Mandela University in Port Elizabeth, agrees that South Africa must focus on generating local PhDs. At the moment, it produces more doctorate-holders who hail from other African countries than from the home nation, he says. “We need to work harder on getting this right,” he adds.

The latest study is the most well thought out, most evidenced-based and least anecdotal to address this complex problem yet, says Zeblon Vilakazi, deputy vice-chancellor at the University of the Witwatersrand in Johannesburg. “This is a step in the right direction,” says Vilakazi.