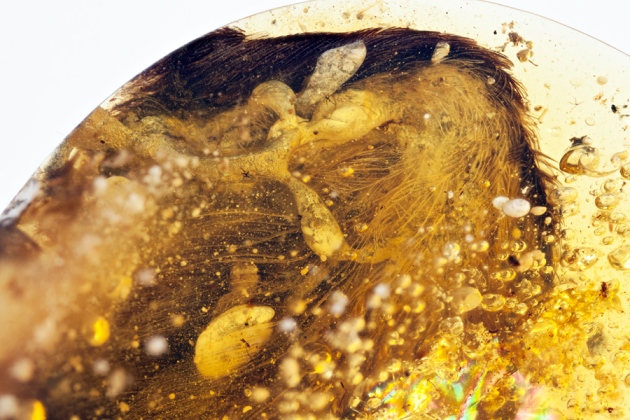 One of two fossil specimens showing the pale underside of the wing and the dark brown feathers on the leading edge.

Two tiny wings locked in amber 99 million years ago suggest that in the middle of the Cretaceous period — when dinosaurs still walked the planet — bird feathers already looked a lot like they do today.

A team of researchers led by Lida Xing, a palaeontologist at the China University of Geosciences in Beijing, recovered a first for the time period: a few cubic centimetres of amber from northeastern Myanmar that contained the partial remains of two bird wings. The specimens include bone, feathers and skin, according to a study published on 28 June in Nature Communications1.

Prior evidence of bird plumage from the Cretaceous, which stretched from 145 million to 66 million years ago, came from 2D impressions left in sedimentary rocks and feathers that had been preserved in amber but that gave no skeletal clues to their species of origin.

“For the first time, we’re seeing the feathers associated with the skeletal materials,” says co-author Ryan McKellar, who studies fossils in amber as curator of invertebrate palaeontology at the Royal Saskatchewan Museum in Regina, Canada. 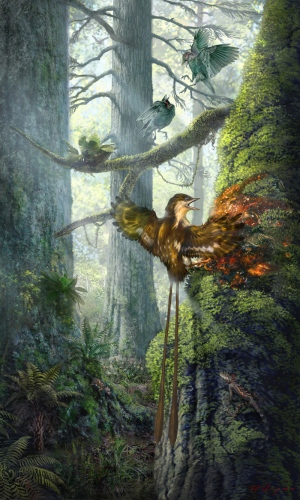 An artist's illustration of an enantiornithine bird with its wing trapped in tree resin.

The amber even preserved claw marks, signs that before it died, one of the birds had struggled against the sticky resin that had engulfed its wing.

The feathers retained their original colouring from pale dots and undersides to darker browns elsewhere, and on both wing fragments, the structures and arrangements of the feathers were similar to those seen in modern birds. The bones were smaller than a hummingbird's and incompletely developed. This suggests that the wings belonged to hatchlings, probably of enantiornithine birds — a primitive group that had teeth and clawed wings, and that went extinct at the same time as the dinosaurs, 66 million years ago.

However, the feathers themselves were more like those of adults and showed no signs that they had moulted — suggesting they had developed quickly and skipped the downy juvenile stage of modern birds entirely. “They’re basically hatching, and ready to go,” says McKellar.

Peter Makovicky, a curator at the Field Museum in Chicago, Illinois, who studies dinosaurs, says that these finds will help to reduce some of the detective work needed to infer a 3D structure from 2D fossils.

“The colour patterns are preserved; the exact arrangement of feathers in three dimensions relative to the bone are preserved,” he says. “It’s fantastic because you get so much more detail.”