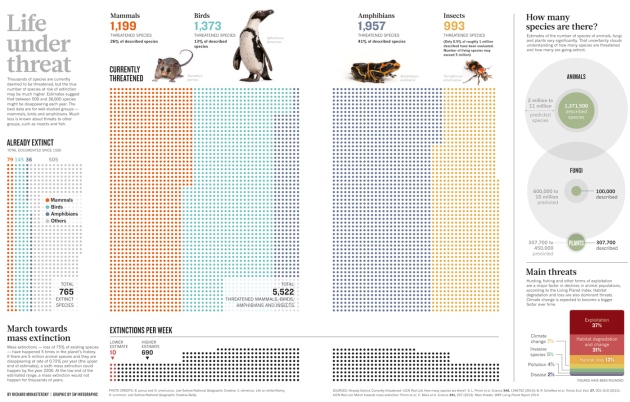 Of all the species that have populated Earth at some time over the past 3.5 billion years, more than 95% have vanished — many of them in spectacular die-offs called mass extinctions. On that much, researchers can generally agree. Yet when it comes to taking stock of how much life exists today — and how quickly it will vanish in the future — uncertainty prevails.

Studies that try to tally the number of species of animals, plants and fungi alive right now produce estimates that swing from less than 2 million to more than 50 million. The problem is that researchers have so far sampled only a sliver of Earth’s biodiversity, and most of the unknown groups inhabit small regions of the world, often in habitats that are rapidly being destroyed.

The International Union for Conservation of Nature (IUCN) highlighted the uncertainty in the latest version of its Red List of Threatened Species, which was released in November. The report evaluated more than 76,000 species, a big increase over earlier editions. But that is just 4% of the more than 1.7 million species that have been described by scientists, making it impossible to offer any reliable threat level for groups that have not been adequately assessed, such as fish, reptiles and insects.

Recognizing these caveats, Nature pulled together the most reliable available data to provide a graphic status report of life on Earth (see ‘Life under threat’). Among the groups that can be assessed, amphibians stand out as the most imperilled: 41% face the threat of extinction, in part because of devastating epidemics caused by chytrid fungi. Large fractions of mammals and birds face significant threats because of habitat loss and degradation, as well as activities such as hunting.

Richard Monastersky looks at the uncertainties behind the current list of endangered species.

Looking forward, the picture gets less certain. The effects of climate change, which are hard to forecast in terms of pace and pattern, will probably accelerate extinctions in as-yet unknown ways. One simple way to project into the future would be to assume that the rate of extinction will be constant; it is currently estimated to range from 0.01% to 0.7% of all existing species a year. “There is a huge uncertainty in projecting future extinction rates,” says Henrique Pereira, an ecologist at the German Centre for Integrative Biodiversity Research in Leipzig.

At the upper rate, thousands of species are disappearing each year. If that trend continues, it could lead to a mass extinction — defined as a loss of 75% of species — over the next few centuries.

Conservation policies could slow extinctions, but current trends do not give much comfort. Although nations are expanding the number of land and ocean areas that they set aside for protection, most measures of biodiversity show that pressures on species are increasing. “In general, the state of biodiversity is worsening, in many cases significantly,” says Derek Tittensor, a marine ecologist with the United Nations Environment Programme’s World Conservation Monitoring Centre in Cambridge, UK.

Despite all the uncertainty, researchers agree that they need to devote more attention to evaluating current and future risks to biodiversity. One approach is to develop comprehensive computer models that can forecast how human activities will alter ecosystems. These general ecosystem models, or GEMs, are in their infancy: earlier this year, Tittensor and his colleagues published initial results from the first global model that seeks to mimic all the major ecological interactions on Earth in much the same way as climate models simulate the atmosphere and oceans (M. B. J. Harfoot et al. PLoS Biol.12,e1001841; 2014).

Building the GEM took 3 years, in part because the model tries to represent all organisms with body masses ranging from 10 micrograms (about the weight of small plankton) to 150,000 kilograms (roughly the size of a blue whale). “It needs a lot more development and testing, and ideally there will be a lot more variety of these models,” says Tittensor. But if they do a decent job of capturing the breadth of life in a computer, he says, “they have real potential to alert us to potential problems we wouldn’t otherwise detect”.

There are 4,529 species of mammal, bird, and amphibian deemed at risk of extinction on the International Union for Conservation of Nature's Red List. To put that number into perspective, move your mouse over the dots below to pull up details of individual species. 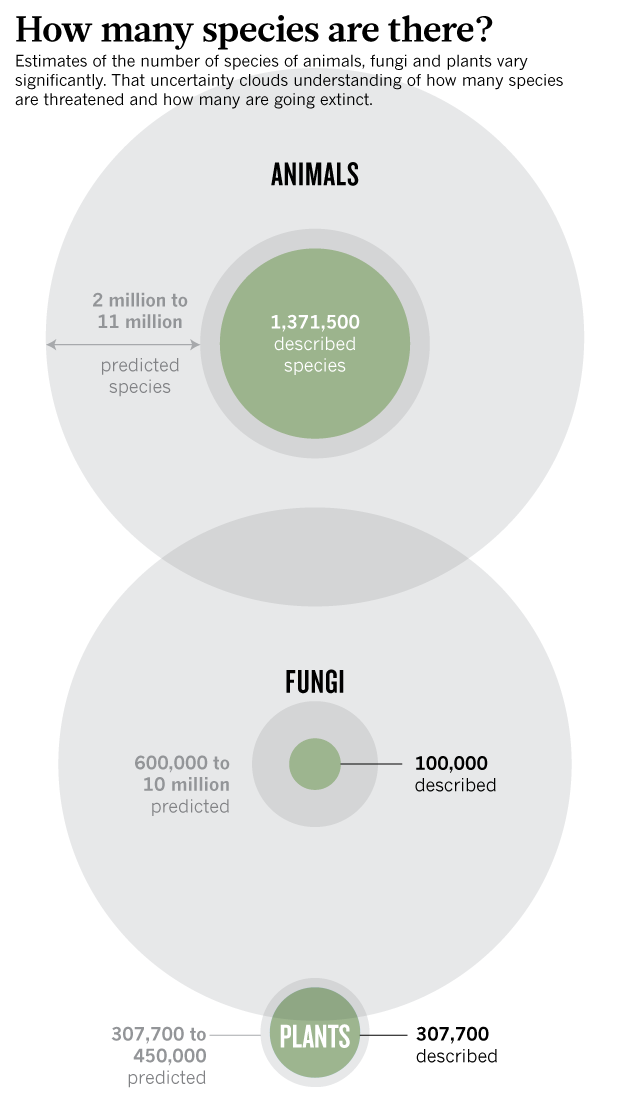 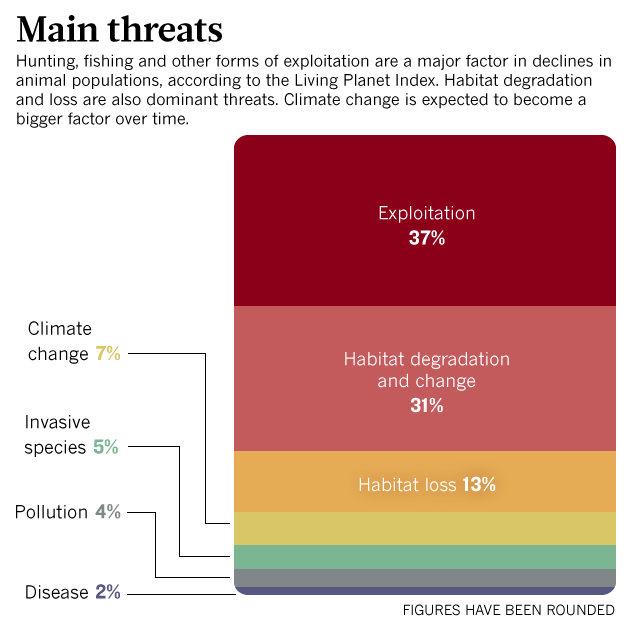 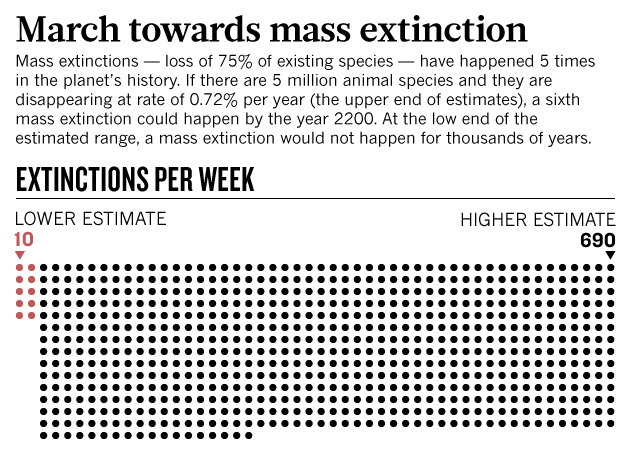 The graphic incorrectly listed the number of described fungi as 48,500. The actual value is approximately 100,000. The image has now been updated.