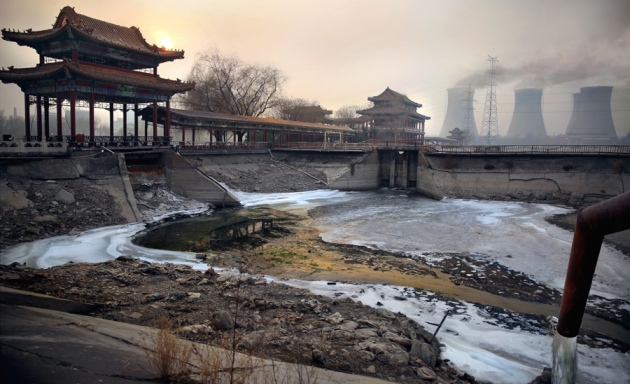 The road to Paris is paved with promises. In the run-up to the United Nations climate summit in the French capital this December, nations are submitting pledges to limit their future carbon emissions. With a preliminary session in Bonn, Germany, scheduled for 1–11 June, it is already clear that the commitments are insufficient to meet the UN’s goal of limiting future temperature increases to 2 °C above pre-industrial levels. It is difficult to say which countries should do more, but in an effort to move the process forward, climate scientists have started to independently assess the pledges. They have found that a Paris agreement to limit warming to 2 °C would require unrealistic political compromises.

The big picture is clear: on the basis of pledges made so far, the global average temperature is projected to rise by around 3 °C above pre-industrial levels by 2100. For a reasonable chance of meeting the 2 °C goal, countries would have to strengthen their pledges sufficiently to limit all future greenhouse-gas emissions to the equivalent of about 1 trillion tonnes of carbon dioxide.

“Once you say we are not doing enough, it begs the question, ‘Who should do more?’,” says Joe Aldy, an economist at Harvard University in Cambridge, Massachusetts, and former special assistant for energy and environment to US President Barack Obama.

That is the issue that climate scientists are trying to grapple with — without taking sides. “This whole issue of assessing these national targets is an important one, and it’s definitely a place where science can help,” says Niklas Höhne, a founding partner of the NewClimate Institute in Cologne, Germany. “But equity and fairness is something which is very much up to interpretation — what’s fair for one is not fair for another.”

The NewClimate Institute is part of a research consortium that produces the Climate Action Tracker, a comprehensive assessment of the pledges made thus far. Using the peer-reviewed literature as a source, it rates pledges on the basis of how close they would bring the world to the 2 °C goal if all countries adopted similar standards.

The United States, European Union (EU) and China get a ‘medium’ rating from the Climate Action Tracker, meaning that their level of commitment, if adopted globally, would probably lead to more than 2 °C of warming. In a pledge submitted on 31 March, the United States vowed to reduce its emissions to at least 26% below 2005 levels by 2025. China has not submitted an official pledge, but committed in November to start reducing its emissions around 2030, the same year that the EU plans to have cut emissions to 40% below 1990 levels.

Canada, which pledged on 15 May to reduce its emissions to 30% below 2005 levels by 2030, received an ‘inadequate’ rating from the tracker, meaning that a global application of its plans would lead to warming of 3–4 °C or more.

Criteria are key for assessing these pledges. In a hypothetical agreement, warming could be limited to 2 °C by allocating shares of the remaining emissions budget among nations. But different methods can be used to allot emissions: nations’ proportions would differ depending on whether shares were distributed on the basis of emissions per capita, per dollar of gross domestic product, or according to the current distributions (see ‘Cutting the carbon cake’). In general, developing countries contend that those responsible for a greater share of historical emissions should get a smaller share of the future emissions budget. Rich countries counter that most emissions today and in the future will come from developing countries, which must also do their part. 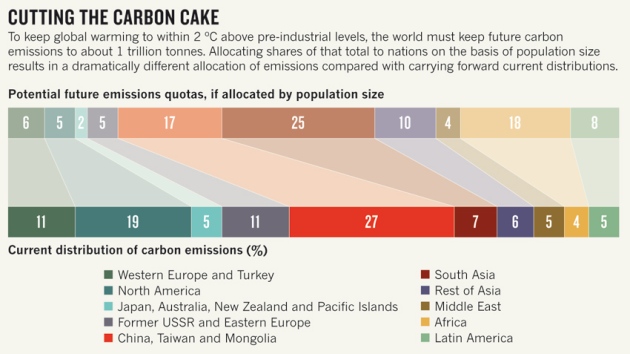 A scientific framework published in Nature Climate Change last September created two emissions-quota scenarios based on the contrasting positions: one favoured poorer countries by allotting emissions on a per capita basis; the other preserved the status quo by carrying forward countries’ current shares of emissions (M. R. Raupach et al. Nature Clim. Change 4, 873–879; 2014). The study also produced a third, ‘compromise’ approach. The authors found that this scenario worked best to meet the 2 °C target — but it would require politically and economically difficult shifts in energy use by all countries.

A co-author of that study, Glen Peters of the Center for International Climate and Environmental Research in Oslo, has since analysed the US, EU and Chinese commitments using the same framework. His unpublished analysis finds that the US and EU pledges would eat up a large proportion of future emissions to meet the 2 °C goal, leaving developing countries with a relatively small share going forward.

Poorer countries would surely baulk at such a plan; they want room to grow and they see cheap fossil-fuel energy as a legitimate tool to lift their citizens out of poverty. Although it has yet to submit its pledge, India, for instance, has said that it will not limit its CO2 emissions until it has risen to the global average of around 5.1 tonnes per capita, from its current level of around 1.9 tonnes per capita.

And then there is China. It now accounts for around 27% of global CO2 emissions and its per capita emissions are 6% higher than the EU’s. Peters’ calculations show that the emissions reductions required of China would be so drastic as to be politically unrealistic: even under the most lenient terms it would have to halt its rapidly growing emissions this year and cut them almost to zero by 2050. In that light, Peters says that climate scientists need to focus more on political viability. “The scientific community in a sense might be a little bit unprepared for doing this kind of thing.”

Ultimately, Aldy says, the UN climate process needs to incorporate a formal review similar to those used by other international bodies, such as the World Trade Organization and the International Monetary Fund. At those organizations, experts produce peer-reviewed reports on economic and trade policy using standardized reports of data and regulations submitted by member countries. The scientific analyses being done now may represent a small step in that direction.

“It’s going to be a little bit messy this year,” Aldy says. “The question is whether that means we end up having a bunch of unproductive conversations about what countries are doing, or whether this turns out to be a productive process of experimentation.”