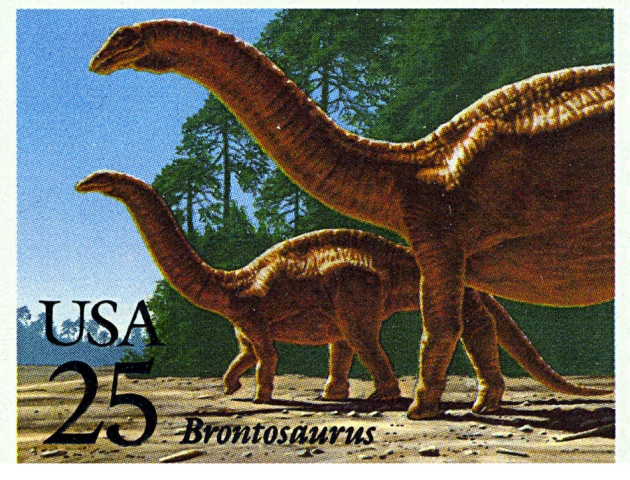 The name Brontosaurus has endured in popular culture, such as this 1989 US stamp.

That may not sit well with palaeontology aficionados, who love to point out that Brontosaurus has not been a valid taxonomic name since the early twentieth century. (Just ask the US Postal Service, which was roundly criticized after it released a Brontosaurus postage stamp in 1989.)

The rise, fall and now rise of the Brontosaurus has its roots in the ‘bone wars’ of nineteenth-century palaeontology. While some prospectors dug up the American West in search of mineral fortunes in the middle to late 1800s, others looked for giant lizards. A race between palaeontologists Edward Cope and Othniel Marsh defined the era.

“Cope and Marsh were big rivals,” says Emanuel Tschopp, a palaeontologist at the Nova University of Lisbon, Portugal, who led the latest study, published on 7 April in the journal PeerJ1. “They really rushed new species into press as fast as possible, and many of these reference specimens on which they based new species are extremely fragmentary and are not comparable directly.”

Working in Colorado’s Morrison formation in 1877, Marsh’s field crew uncovered the gargantuan bones of a species he dubbed Apatosaurus ajax — a genus name that translates to deceptive lizard, and a species name that references the Greek hero Ajax. Two years later, Marsh found another giant dinosaur in the same rock formation and named it Brontosaurus excelsus, the noble thunder lizard.

In the early 1900s, after discovering a fossil that was similar to both Brontosaurus and Apatosaurus, other researchers decided that the two dinosaurs were distinct species of the same genus. Subsequent studies only raised further questions about the status of Brontosaurus.

Palaeontologists eventually agreed that Brontosaurus is properly called Apatosaurus, under taxonomic rules drafted by the eighteenth-century Swedish systematist Carl Linnaeus and still in use today. The rules state that the first name given for an animal takes priority. The bones attributed to Brontosaurus excelsus, therefore, belonged to Apatosaurus excelsus.

The first known Brontosaurus fossil was unearthed in the Morrison formation in Colorado.

Tschopp didn't set out to resurrect the Brontosaurus when he started analysing different specimens of diplodocid — the group to which Apatosaurus, Diplodocus and other giants belong. But he was interested in reviewing how the fossils had been classified and whether anatomical differences between specimens represented variation within species, or between species or genera. Tschopp and his colleagues analysed nearly 500 anatomical traits in dozens of specimens belonging to all of the 20 or so species of diplodocids to create a family tree. They spent five years amassing data, visiting 20 museums across Europe and the United States.

Very broadly, their tree confirmed established ideas about the evolutionary relationships among diplodocids. But the scientists also concluded that Apatosaurus and Brontosaurus were different enough to belong in their own genera. Many of the anatomical differences between the two dinosaurs are obscure, Tschopp says, but Apatosaurus’s stouter neck is an obvious one. “Even though both are very robust and massive animals, Apatosaurus is even more so,” he adds.

Tschopp and his team thought very carefully about their decision to reinstate Brontosaurus, and they expect some pushback. “We knew it would be a major finding because Brontosaurus is such a popular name,” he says. “I’m pretty sure there will be a scientific discussion around this. I hope there will be. That’s how science works.”

The resurrection of Brontosaurus may grab all the headlines, but the analysis also reshuffles some other dinosaurs. A species called Diplodocus hayi got its own genus, Galeamopus. Meanwhile, the team determined that a dinosaur from Portugal called Dinheirosaurus belongs in the genus Supersaurus, remains of which have been found only in North America.

The paper represents “the best current view” of diplodocids, says Michael Benton, a vertebrate palaeontologist at the University of Bristol, UK. The traits that distinguish Brontosaurus from Apatosaurus are in line with characteristics that define other genera of sauropod, the larger dinosaur group to which diplodocids belong.

“The discrimination of Brontosaurus from Apatosaurus will be startling,” he says. “It’s the classic example we always use to explain the meaning of ‘synonym’ to students, or as an example of the speed and dastardly deeds of Marsh and Cope as they each rushed to name new taxa, sometimes the same beast.”

Philip Mannion, a palaeontologist at Imperial College London, says the study is important not only for its resurrection of Brontosaurus. By determining which diplodocid bones fall under which species and genus, it should make it easier for palaeontologists to correctly classify new finds while helping them to understand the evolution of some of the largest dinosaurs that lived.

“The public is going to get a lot out of this because Brontosaurus has this very prominent place in the public imagination,” says Mannion, who has a personal stake in the issue.

Several years ago, he was contacted by a poster company asking whether Brontosaurus was a valid dinosaur name. “A father had bought a poster for his child, and the child straight away said Brontosaurus isn’t a real dinosaur,” remembers Mannion, who told the company that the kid was right.

Will Mannion now tell the firm that the Brontosaurus is back? “Maybe I’ll let them get in touch,” he says.