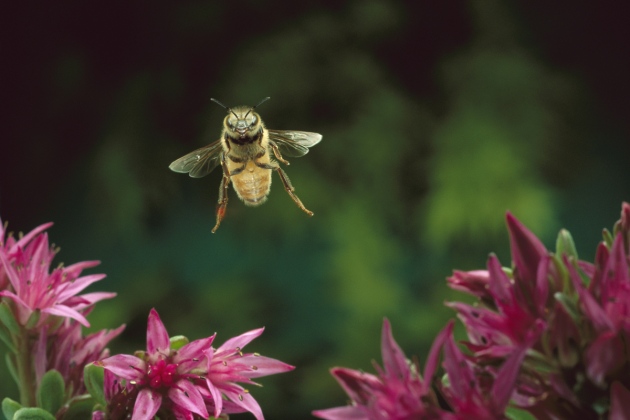 Researchers have long marveled at the complex navigation abilities of bees.

Bees, like birds and butterflies, use the Sun as a compass for navigation, whereas mammals typically find their way by remembering familiar landmarks on a continuous mental map. However, the latest research suggests that bees also use this type of map, despite their much smaller brain size. The work adds a new dimension to complex bee-navigation abilities that have long captivated researchers.

“The surprise comes for many people that such a tiny little brain is able to form such a rich memory described as a cognitive map,” says co-author Randolf Menzel, a neurobiologist at the Free University of Berlin.

The research by Menzel and his team, published today in the Proceedings of the National Academy of Sciences1, demonstrates that bees can find their way back to their hives without relying solely on the Sun. Instead, they seem to use a 'cognitive map' that is made up of memorized landscape snapshots that direct them home.

The cognitive map used by mammals is thought to originate in the brain’s hippocampus. Humans employ such maps on a daily basis; for example, even in a windowless office, many people can point towards their home, orienting themselves in space based on knowledge of their location relative to the outside world.

“They can point to their home generally even though they can’t see it, even along a path through a wall that they haven’t travelled,” explains Fred Dyer, a behavioural biologist at Michigan State University in East Lansing, who was not involved in the research. The study authors argue that bees can do something similar, albeit on a much more rudimentary level.

The authors tested their theory by interfering with the bees' Sun compass: they shifted the bees’ internal biological clock by inducing sleep using a general anaesthetic. Once the bees had woken up, Menzel and his colleagues tracked them along a path of several hundred metres from a release site to their hive using harmonic radar, which detects and records movement based on transponders fixed to the bees.

When the bees were released from a site with which they were unfamiliar, they initially travelled in the wrong direction, flying away from their hive instead of towards it. With their internal clocks shifted, the bees still thought that it was morning — so they went the wrong way based on their sense of where the Sun should be. “But then they redirect, ignoring the information from the Sun,” says Menzel. “They refer to something else” — which he and his team think is a cognitive map.

Dyer says that Menzel and colleagues' results provide good evidence that bees do not navigate by a type of vector addition, pegged to the position of the Sun. “It’s always progress when you can rule out a hypothesis,” he adds. And he applauds the work for its use of harmonic radar and anaesthesia to catch a glimpse of the cognitive lives of bees.

But Dyer is not yet convinced that bees navigate using a cognitive map. He thinks that the insects could be using features of the terrain independent of the Sun to navigate, similar to the way a mariner might use a beacon. This is not the same as a cognitive map, which allows an individual to head down an unfamiliar path towards an unseen goal without necessarily using a landmark.

Menzel now hopes to further characterize his findings. He thinks that bees use a type of cognitive map that does not store details, but instead lets them recall a coarse layout of the environment. He plans to place bees in mazes in the laboratory and record their brain signals as they negotiate an artificial environment, which he hopes will offer further clues about their cognitive and navigational abilities.