During flips, bats are able to keep track of their orientation in space thanks to a surprisingly complex 'head-direction' system.

The brains of bats have a neuronal 'compass' that enables them to navigate in three dimensions.

The discovery, published in Nature1 on 3 December, explains the long-standing mystery of how bats — and perhaps other mammals such as monkeys, which do not fly but swing between branches — manage to orient themselves in the air as well as on the ground.

The ‘bat-nav’ system is “surprising — but also surprising in its beauty”, says May-Britt Moser, a neuroscientist at the Norwegian University of Science and Technology in Trondheim, who shared this year’s Nobel Prize for Physiology or Medicine for the discovery of a two-dimensional navigation system in the brains of rats.

Computational neuroscientist Andreas Herz, from the University of Munich in Germany, adds that the simple elegance of the neural coding that makes up the compass has wider implications for how the brain computes.

These systems are not 'compasses' in the sense that they detect the geomagnetic north, and in fact they are not sensory organs at all but simply systems for keeping track of information that the brain has integrated from the senses.

In her work, Moser and her collaborators had found that rats have specialized neural cells for navigation. In particular, the researchers found, the rodents have 'head-direction' cells, contained in a brain area called the presubiculum. Different cells in the head-direction system fire depending on which direction on the horizontal plane the animal points its head.

Now, Nachum Ulanovsky and his colleagues at the Weizmann Institute of Science in Rehovot, Israel, have discovered that the head-direction cells in the Egyptian fruit bats that they studied are more complex than those in rats. In addition to cells that fire depending on horizontal direction, the bats also have some that fire only when the creatures move their heads up and down (change pitch) or rotate in the roll axis.

To find these cells, they implanted electrodes into the presubiculum area of the bats’ brains and recorded single neurons firing. They also mounted a special head-monitoring device comprising four differently coloured light-emitting diodes arranged in a pyramid onto the bats’ heads. By comparing the neuronal firings with head movement, the researchers could determine the particular head orientation — horizontal, vertical or a combination — at which each neuron fired when the bats were crawling or flying.

They found that most neurons were tuned to horizontal directions, but more than one-fifth were tuned to head pitch. This established that the bats' navigation system is fully 3-D. Only a few of the neurons correlated to head roll, however. This may be because bats do not roll their bodies much in flight, says Ulanovsky.

The team's findings included one additional surprise, which came when the researchers observed bats performing an upside-down flip to land hanging upside down (see figure below). As expected, the firings of the pitch neurons reflected the full 180° rotation. But even though the head ended up pointing in the opposite horizontal direction than it was during flight, the horizontal-direction neurons did not reflect the flip — something that would have required them to suddenly change from, say “east” to “west”. Ulanovsky says that he stared at his data for three months before he understood that this was happening.

Once the penny dropped, the scientists worked out that the bat brain was computing the signals not as latitude–longitude coordinates on a sphere — as Ulanovsky intuitively imagined three-dimensional space would be represented — but as coordinates on a torus, a figure shaped like the surface of a bagel. 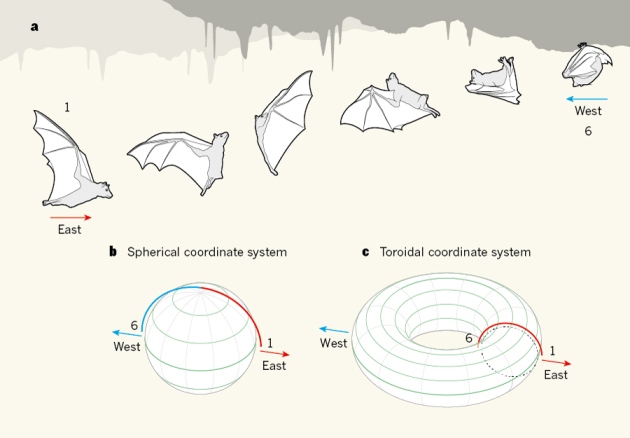 As on the sphere, on the bagel surface, the longitude (green circles in the picture) still represents horizontal direction, and the latitude (red circle) pitch. But the bagel representation allows the flip to be represented without a sudden change in longitude.

“It has been a humbling experience,” says Ulanovsky, laughing. It may have taken him months to understand, but now when he explains the mechanism to other people, they get it in seconds.

In a related News & Views article, Moser and her Trondheim colleague David Rowland speculate that the animals' skills may be reflected in their anatomy. In rats, the head-direction cells can be imagined as a network of neurons arranged in a circle, describing the full 360° of possible directions. But in bats, Moser and Rowland write, the head-direction cells “may have connections between cells that follow a toroidal arrangement“.

Scientists are divided in their expectation about whether bat nav will show up in animals such as humans, who do not fly or enjoy spending time upside down. Some, including Herz, suspect that it will not, arguing that such creatures may not need it, and that the toroidal model in any case works only for animals with little rolling movement.

But Moser says that she has a feeling that it will, maybe to explain feelings of vertigo when we lose our sense of up and down, or the disorientation we sometimes feel on emerging from an underground train. “Well, we just have to find out by getting the data,” she says.