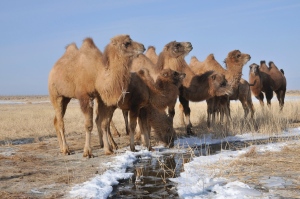 Bactrian camels have evolved to live in very cold and dry climates.

Sky-high blood glucose levels, a diet loaded with salt and a tendency to pack away fat sounds like a recipe for a health disaster in a human. But in a Bactrian camel, these are adaptations that may help it survive in some of the driest, coldest and highest regions of the world.

Researchers in Mongolia and China have begun to unravel the genomic peculiarities behind the physiological tricks that camels use to survive in the harshest of conditions. In a paper published today in Nature Communications, the scientists describe the draft genomes of wild and domesticated Bactrian camels1.

When they first explore a new genome, geneticists are most interested in the ‘rapidly evolving’ sections. These hot zones of activity typically contain genes that define the species, coding for the characteristics that set it apart from its closest relatives.

“We found that many genes related to metabolism are under accelerated evolution in the camel, compared with other even-toed ungulates such as cattle,” says Yixue Li, director of the Shanghai Center for Bioinformation Technology in China and a co-author of the paper.

All in the blood

Camels, as ruminants like cattle and sheep, digest food by chewing the cud. But many of the Bactrian genome's rapidly evolving genes regulate the metabolic pathway, suggesting that what camels do with the nutrients after digestion is a whole different ball game. “It was surprising to me that they had significant difference in the metabolism,” says Kim Worley, a molecular geneticist at Baylor College of Medicine in Houston, Texas. The differences could point to how Bactrians produce and store energy in the desert.

The work shows that camels can withstand massive blood glucose levels owing in part to changes in genes that are linked to type II diabetes in humans. The Bactrians' rapidly evolving genes include some that regulate insulin signalling pathways, the authors explain. A closer study of how camels respond to insulin may help to unravel how insulin regulation and diabetes work in humans. “I’m very interested in the glucose story,” says Brian Dalrymple, a computational biologist at the Queensland Bioscience Precinct in Brisbane, Australia.

The researchers also identified sections of the genome that could begin to explain why Bactrian camels are much better than humans at tolerating high levels of salt in their bloodstreams. In humans, the gene CYP2J controls hypertension2: suppressing it leads to high blood pressure. However, camels have multiple copies of the gene, which could keep their blood pressure low even when they consume a lot of salt, suggest the authors of the latest work.

This rough analysis is only the start of the investigation into the camel genome. “There are interesting titbits for future work,” says Max Rothschild, an animal genomicist at Iowa State University in Ames.