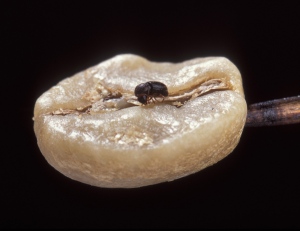 Coffee berry borer beetles contain a gene that may have jumped from bacteria, enabling the beetle to digest sugars in the bean.

A bacterial gene discovered in the genome of the coffee berry borer beetle, a major pest, seems to allow the beetle to occupy a unique ecological niche and feed exclusively on coffee beans.

The finding, published online this week in Proceedings of the National Academy of Sciences1, is a rare example of a bacteria-to-animal gene transfer with an obvious benefit to the animal.

"We were excited to see a very clear story emerging for the function of this gene," says Jocelyn Rose, a plant biologist at Cornell University in Ithaca, New York.

Rose and his colleagues think that the transferred gene, which lets the beetle break down complex sugars in the coffee bean, came from the beetle's gut bacteria.

Nonsexual horizontal gene transfer (HGT) has been widely documented in prokaryotes (bacteria and archaea), the simplest forms of life2. However, relatively few examples have been uncovered in the more complex eukaryotes (which have a defined nucleus), especially higher animals3. And even in those rare cases, the evolutionary or functional significance of the transferred gene has not usually been clear.

First of its kind

Rose and his colleagues analysed the genome of the coffee berry borer beetle, Hypothenemus hampei, a small insect native to Africa that spread worldwide during the twentieth century. They identified a beetle gene, HhMAN1, that codes for a protein called mannanase, which breaks down the polysaccharide galactomannan — found in the coffee beans that the beetle feeds on. The gene closely resembles the sequence of a bacterial mannanase, and is the first gene of this type to be discovered in an insect.

"What's interesting here is that they've found a function for the transferred gene and it's important for the beetle's survival," says Julie Dunning Hotopp of the Institute for Genome Science at the University of Maryland in Baltimore.

By looking at the DNA sequence on either side of HhMAN1, the team discovered that the gene lies between two transposable elements — stretches of DNA that can jump from one location to another in a genome. The authors propose that these elements, known as transposons, may have enabled the mannanase gene to jump from bacteria into the beetle genome, although "how exactly it gets across from the bacteria into the beetle germline is still completely unknown", Rose says.

But it is possible that the adjacent transposons are coincidental, says Dunning Hotopp. "When you have a genome full of transposons, it could just show up there by chance," she says.

"Cases of ecologically significant HGT in eukaryotes are starting to pile up," says Patrick Keeling, who studies the evolution of single-celled eukaryotes at the University of British Columbia in Vancouver.

For example, in 2010, researchers from the University of Arizona in Tucson reported that carotenoid genes that determine aphid body colour originated in fungi4. Furthermore, French scientists have revealed several HGT events from different bacteria that underlie the ability of some nematodes to degrade plant cell walls5.

"HGT may not be as prevalent as in prokaryotes," Keeling says, but "it is clearly quite important in eukaryotes too."

Rose thinks that more examples of HGT could come from DNA sequencing projects. Bioinformatics software is usually programmed to remove sequences from eukaryotic genomes it deems as "contaminating" DNA, he notes, including sequences that seem to be bacterial. So it is possible that some genetic sequences in higher organisms that originated in bacteria are being thrown out by current sequencing efforts, he says.