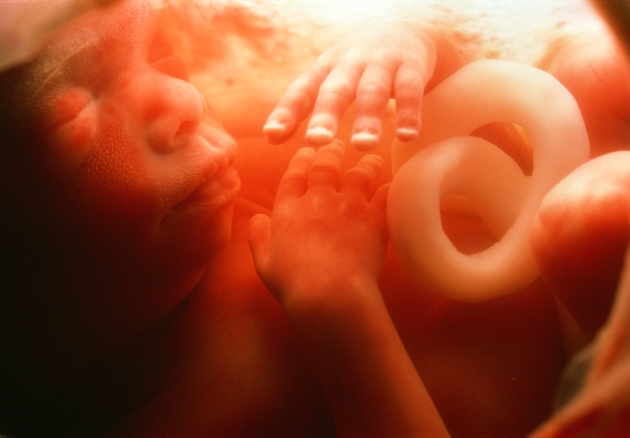 The amniotic sac in which a fetus grows is a sterile environment, but the placenta — an organ the fetus shares with the mother — is home to a bacterial community.

The placenta, long thought to be sterile, is home to a bacterial community similar to the one found in the mouth, researchers report today. The microbes are generally non-pathogenic, but according to the authors of the study, variations in their composition could be at the root of common but poorly understood pregnancy disorders such as preterm birth, which occurs in one out of every ten pregnancies.

In 2012, Kjersti Aagaard, an obstetrician at Baylor College of Medicine in Houston, Texas, and her collaborators found that the most abundant microbes in an expectant mother’s vagina were different from those in a non-pregnant woman, but were not generally representative of those that were most common in the stool of an infant in its first week of life1. To investigate where these microbes were coming from, the team decided to examine the placenta.

In the new study, the researchers took samples of placental tissue from 320 women just after delivery, extracted DNA from the tissue and sequenced it. They found that the weight of the mother or whether she gave birth by caesarean or vaginally did not seem to change the makeup of the placental microbiome. But, Aagaard says, the bacterial community “was different among women who either experienced a preterm birth or had a much earlier infection, such as a urinary tract infection — even if that infection was treated and cured many months or weeks previously”. Their findings are published today in Science Translational Medicine2.

The researchers also compared the placental microbiomes to those found in the vagina, gut, mouth and on the skin of non-pregnant women. They found that the placental microbiome was most similar to that of the mouth. The authors speculate that the microbes travel to the placenta from the mouth via the blood. The results reinforce data suggesting a link between periodontal disease in the mother and the risk of preterm birth, says Aagaard.

“This is the first study to show that even in normal pregnancy there is a specific microbiome associated with normal placentation,” says George Saade, an obstetrician at the University of Texas Medical Branch in Galveston, who was not involved in the work.

Roberto Romero, who is program director for perinatal research and obstetrics at the US National Institute of Child Health and Human Development, says that the bacteria the team identified could be from maternal blood rather than being part of a microbial community that lives in the placenta. However Antonio Frias, an obstetrician at Oregon Health & Science University in Portland who was not involved in the study, says the researchers collected the samples ”in a fashion that minimized the risk of potential contamination”.

The team is now studying how women’s microbial communities change during pregnancy. The aim is to identify women at risk of preterm birth, and develop ways to prevent it or deal with its complications in newborns — possibly by using dietary changes to enhance the healthy microbes in the placenta, vagina or the mouth and gut.