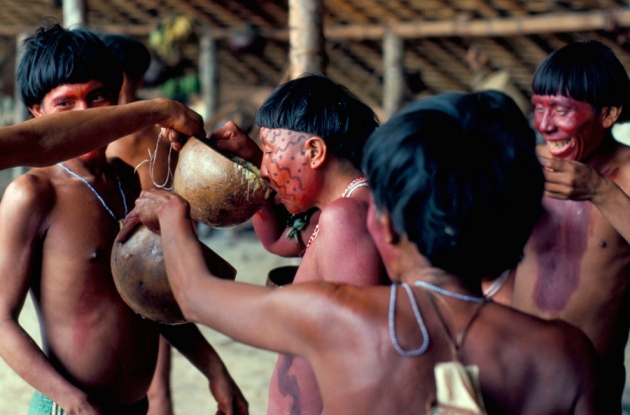 The Yanomami of South America have been relatively unaffected by the outside world for 11,000 years.

An isolated American Indian group in the Venezuelan Amazon hosts the most-diverse constellation of microbes ever discovered in humans, researchers reported on 17 April in Science Advances1. Surprisingly, the group's microbiome includes bacteria with genes that confer antibiotic resistance — even though its members, part of the Yanomami tribe, are not thought to have been exposed to the drugs.

“We knew that the microbes living on Yanomami would probably be more diverse, but we were surprised by the extent,” says Maria Gloria Dominguez-Bello, a microbial ecologist at New York University and an author of the paper.

The work adds to a growing body of research on the microbiome. Studies have suggested, for instance, that the microscopic communities that occupy the human body could be a new source of drugs2. And comparing the composition of different groups' microbiomes has given researchers clues about how humans lived and migrated long ago3.

Blast from the past

But scientists still do not understand all the factors that determine the make-up of a person's microbiome. “We do know that food, environment and chemicals play the big roles,” says Sarkis Mazmanian, a microbiologist at the California Institute of Technology in Pasadena. The wide adoption of antibiotics, rigorous hygiene and processed diets is thought to have have cut down the genetic diversity of microbiomes in the developed world.

This makes the microbiomes of individual Yanomami particularly interesting, Dominguez-Bello says. The researchers took oral, faecal and skin samples from 34 people in a small Yanomami community that was unknown to the Western world until 2008, when it was spotted by helicopter. A medical team made contact in 2009, but the group remains relatively isolated. (Mindful of this, only one of the study's authors interacted with the villagers to collect the microbe samples.)

When researchers analysed the microbial DNA in those samples, they found that the average Yanomami's microbiota had twice as many genes as that of the average US person. More surprisingly, the Yanomami microbiome was even more diverse than those reported for other indigenous groups in South America and in Africa4.

The scientists were also intrigued by the discovery of genes that cause resistance to both naturally occurring and synthetic antibiotics. Kenneth Kidd, an evolutionary biologist at Yale University in New Haven, Connecticut, says that it is difficult to draw any conclusions about how this resistance arose, however.

Although relatively unaffected by the outside world for 11,000 years, some Yanomami groups have been widely studied by anthropologists since the middle of the twentieth century. Those who participated in this study had crossed paths with few outsiders — just a few medical personnel — but, Kidd says, “microbes move much faster than human contact”. Soil exposure and trade could bring in enough antibiotics to induce resistance mutations, for example.

Still, the paper is a landmark work, says Mazmanian. “Many people have speculated that ancient microbiomes were much more diverse,” he says. “With this sequencing, it’s like we have a snapshot going back in microbial time to show it.”

And the research may yield more discoveries: the study's authors have cultured and stored the microbes they collected and plan to further study and characterize them.