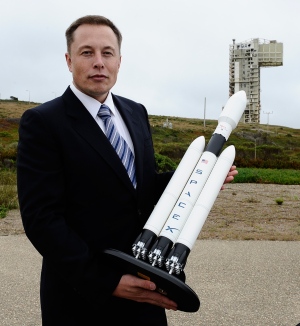 Elon Musk believes that reusable rockets are the key to developing a space-based civilization.

The Californian space-technology company SpaceX, based in Hawthorne, celebrates its tenth birthday this year. The company's re-usable, unmanned Dragon spacecraft is due to make its second demonstration flight at the end of April, when it will visit the International Space Station. A version of Dragon that could carry seven astronauts is under development.

Elon Musk, SpaceX's chief executive and chief technology officer, talked to Nature about his plans for the company and his personal ambitions for space flight.

What motivated you to found SpaceX?

The next important step in the evolution of life is that mankind develops a space-based civilization, ultimately becoming a multi-planet species. I think that is incredibly important that humanity is out there exploring the Solar System, and that we have a self-sustaining base on Mars.

But we weren't really making progress in rocket technology, and the United States has no ability to send astronauts into Earth orbit, at least until our spacecraft comes online in a few years. That's a pretty negative trajectory, so I started SpaceX to try to reverse that trend.

It's important that we reinvigorate interest in space. The interest of the public has been lost in recent years, because we haven't been pushing the frontier of space flight, particularly human space flight. We need to do things that are exciting and push the boundaries of technology, and then we will get public interest again.

How much interest has the science community shown in the Dragon and DragonLab spacecraft?

We have been in discussion with NASA Ames and the Jet Propulsion Lab about using our rockets, combined with the Dragon spacecraft, to do missions to Mars. We're hoping that DragonLab can provide a means of doing low-cost experiments in space — and even doing missions to Mars, Venus, Mercury and the asteroids. It can land on any solid or liquid surface, so it is really quite versatile.

Do you see a space-faring civilization as a way of defending humanity against a catastrophe on Earth?

Absolutely. We would be backing up the biosphere. We wouldn't just be preserving humanity, we would be preserving much of life. It is certainly possible for some calamity to come along — as we see in the several major extinction events in the fossil record. Humanity has obviously developed the means of destroying itself, so I think we need planetary redundancy to protect against the unlikely possibility of natural or man-made Armageddon.

Do you have a desire to travel to orbit?

I would like to do that at some point — but I can't take personal risks because I have too many dependencies. Before I had kids and the responsibility of running two companies I would do lots of physically risky things. I used to have this fighter jet that I'd fly around and do crazy things with. So, while I'd like to go up, it will probably be a few years after the first mission.

Do you see yourself going beyond orbit?

Do you think that is an achievable target within your lifetime?

What is the most important next step?

We are trying to achieve full and rapid re-usability. If we can make fully and rapidly re-usable rockets that are cheaper to build than expendable rockets are today, then we will only be worried about the fuel, and the propellant cost per flight is only 0.3% of the cost of the mission.

Unless someone invents such a rocket, humanity will be confined to Earth forever. Without airplanes we can still get to places on Earth — airplanes just made travel faster. But in the case of rockets, if we don't achieve re-usable rockets we will never colonize another planet. Imagine if, during the colonization of America, ships had not been re-usable. It would have been impossible to colonize America — it would have cost too much, and they would have run out of wood in England.