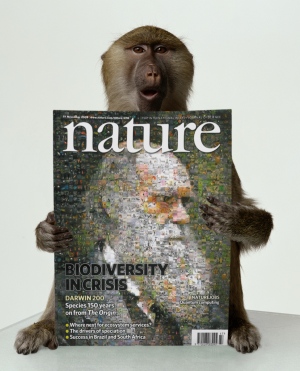 Baboons can learn how to work out when a four-letter word is real English, and when it's nonsense.

Even though they speak no language, baboons can achieve one of the first steps in reading — the ability to distinguish real words from nonsense on the basis of the arrangement of their letters.

The monkeys' ability suggests that reading is based on simple object-identification skills, rather than on more advanced linguistic skills, according to Jonathan Grainger and his colleagues at Aix-Marseille University in France.

“When we read, we’re capitalizing on object identification, an expertise we already have and one that’s quite ancient,” Grainger says. “We identify a table by its components: its tabletop and four legs. The same goes for identifying words using their component letters.”

Grainger's study was performed on six adolescent baboons (Papio papio) housed together. The animals had free access to computer screens displaying four-letter strings of words that formed either real English words or meaningless 'nonwords' that resembled real words, such as 'DRAN' or 'TELK'.

Interested baboons touched the screen to identify the letter string as a word or a nonword. A correct answer earned a food reward. Each baboon had a microchip in its arm that allowed the researchers to identify the individual taking the test. The team's results are published in Science today1.

Over 44 days, the animals completed around 50,000 tests. They identified words with an average of 75% accuracy, and learned between 81 and 308 words from the 500 words and more than 7,000 randomly generated nonwords that they were shown.

The main difference between words and nonwords was the number of frequently recurring bigrams they contained. Bigrams are combinations of two letters, such as the 'it' and 'te' in 'kite' and 'bite'. The researchers minimized common bigrams in nonwords and maximized them in words, so that the baboons could discriminate on the basis of statistical dependence between letters.

The team found that baboons were best at spotting the words containing the most common bigrams. This correlation shows that they were truly learning and not just memorizing the words.

O is for ‘orthography’

The researchers concluded that the baboons probably identified the English words by using orthographic information — the identity and position of the letters within the word.

Humans use similar cues when reading, says Emmanuel Keuleers, a psychologist at Ghent University in Belgium, who has conducted a similar experiment on humans2. Despite their knowledge of English, he says, “our participants partly relied on orthographic stimuli” to distinguish between words and nonwords.

A team of researchers led by Stanislas Dehaene, a cognitive psychologist at the Collège de France in Paris, has identified the part of the human brain that is responsible for the visualization of words3. There may be a similar brain region in baboons that is dedicated to this “key component of literacy”, he says.

Grainger is particularly interested in the neural attributes of skilled readers, and hopes that the results in baboons will aid in understanding this ability. The study may also help to uncover the causes of reading disabilities such as dyslexia, he adds.

The team next plans to try to teach the baboons an artificial alphabet. This would give greater control over the visual information that defines individual letters, Grainger explains, and would provide a more precise idea of how baboons master word recognition.