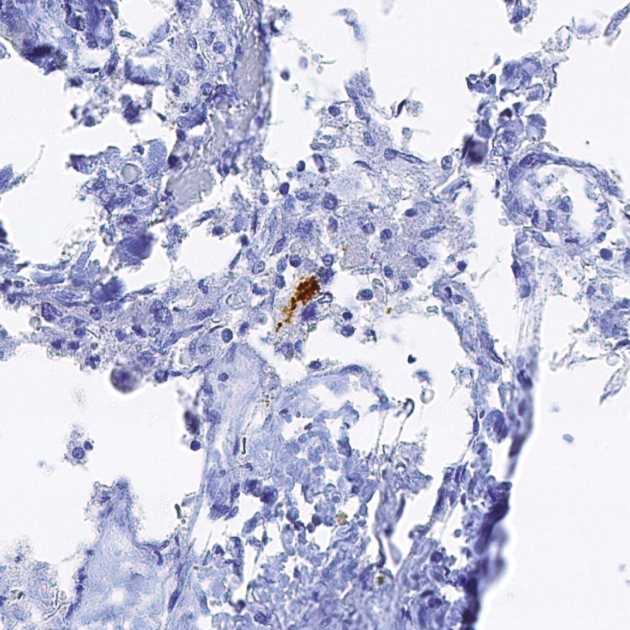 Amyloid-β protein (brown) has been found in the pituitary gland, which sits just outside the brain.

Only a decade ago, the idea that Alzheimer’s disease might be transmissible between people would have been laughed off the stage. But scientists have since shown that tissues can transmit symptoms of the disease between animals — and new results imply that humans, at least in one unusual circumstance, may not be an exception.

The findings, published in this issue of Nature, emerged during autopsy studies of the brains of eight people who had died of the rare but deadly Creutzfeldt–Jakob disease (CJD; Z. Jaunmuktane et al. Nature 525, 247–250; 2015). They contracted it decades after treatment with contaminated batches of growth hormone that had been extracted from the pituitary glands of human cadavers. Six of the brains, in addition to the damage caused by CJD, harboured the tell-tale amyloid pathology that is associated with Alzheimer’s disease.

“This is the first evidence of real-world transmission of amyloid pathology,” says molecular neuroscientist John Hardy of University College London (UCL). “It is potentially concerning.”

If confirmed, the findings raise the spectre that tens of thousands of other people treated with the human growth-hormone (hGH) extracts might be at risk of Alzheimer’s. And although there is no suggestion that Alzheimer’s could be contracted through normal contact with patients, some scientists worry that the findings may have broader implications: that Alzheimer’s could be passed on by other routes through which CJD can be transmitted, such as blood transfusions or contaminated surgical instruments.

CJD is one of several neurodegenerative diseases caused by an infectious, misfolded protein, or prion, called PrP. Its misfolded shape makes it sticky, so it forms clumps. Scientists now believe that Alzheimer’s could also be triggered by a similar misfolding, in this case of the peptide amyloid-β, with the disease’s plaques growing from small amyloid-β ‘seeds’. Mice and marmosets have developed plaques when their brains were injected with brain extracts containing amyloid-β; in mice, plaques developed even when the extracts were injected into the animals’ bellies.

The authors of the latest paper provide the first support for the theory that amyloid-plaque formation could be triggered in this way in humans, although “they fall short of providing the final proof of this”, says neuroscientist Mathias Jucker of the University of Tübingen, Germany, who is co-author of an accompanying News & Views article (see page 193). Such proof would require injecting the cadaver-derived hGH into animals under controlled conditions and seeing whether amyloid deposits develop as a consequence.

But it may not be easy to get hold of the original hGH extracts, which were prepared in various locations. Some are known to have been stored in Britain, where court cases about possible liability are ongoing, but scientists do not know whether other stocks have been kept. People who received the hGH injections will also be difficult to trace after so many years. The National Prion Clinic at UCL Hospital, which has a helpline for people who are concerned about the risk of CJD after hGH injections, will advise those who call asking about the new developments.

From 1958 until 1985, when the dangers were first realized, around 30,000 people worldwide had hGH injected into their muscles — mostly children who had not been growing at a normal rate. The preparations comprised pooled material extracted from thousands of cadavers. Some extracts turned out to have been contaminated with CJD prions, leading to 226 deadly infections by 2012, mostly in France (119 cases), Britain (65 cases) and the United States (29 cases). Numbers are still creeping up, because CJD has a long incubation period.

None of the eight patients studied, who were aged between 36 and 51 when they died, had shown clinical symptoms of Alzheimer’s disease, which also has a long incubation period. Of the six who already had amyloid-β pathology, it was widespread in four.

Because it is rare to see this type of amyloid pathology at such young ages, the scientists suspected that amyloid seeds may have been transferred with the hGH injection, just as the CJD prion had been. They did a series of investigations to rule out other explanations.

They determined that none of the eight individuals carried genes that would predispose them to early-onset Alzheimer’s or other neurodegenerative diseases. They looked for, but did not find, significant amyloid pathology in patients of a similar age who had died of CJD or other prion diseases but had never been treated with hGH.

Furthermore, the team checked to see whether amyloid pathology really can spread from the brain to the pituitary gland, located just outside the base of the brain. Confirming a 2013 US study, they found that it can spread in principle. They examined the pituitary glands of 49 people who had died with amyloid plaques in their brains and found that seven contained amyloid deposits.

“We think that the most plausible explanation for the occurrence of the amyloid pathology is that it had been transmitted by particular hGH extracts that happened to be contaminated with amyloid-β seeds as well as the CJD prions,” says John Collinge, a co-author of the paper and a neurologist at UCL. If this turns out to be the case, amyloid-β would have been a much more frequent contaminant in the different hGH batches than PrP was, because Alzheimer’s is a very common disease.

Prions are harder to deactivate than bacteria and viruses. They stick tightly to metals, and decontamination requires extreme sterilization conditions, which can harm fragile medical instruments. For these reasons, neurosurgeons do not routinely do this type of decontamination, says one German neurosurgeon, speaking off the record —  adding that if it were to be confirmed that Alzheimer’s is transmitted in a prion-like way, the impact on public health and surgical practice would be major, and very expensive.

“We have learnt a lot about decontamination from our experience with CJD,” says neuropathologist Charles Duyckaerts at the Pitié-Salpêtrière Hospital in Paris. “But this is a wake-up call to the medical community to be particularly vigilant.”

With so much at stake, scientists are preparing to try to replicate the results independently. Duyckaerts says that he plans to do so on 20 or 30 subjects who died of CJD in France after receiving the cadaver-derived hGH treatment.