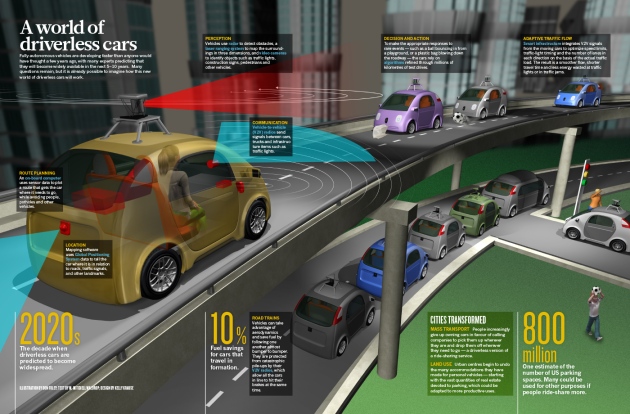 This summer, people will cruise through the streets of Greenwich, UK, in electric shuttles with no one's hands on the steering wheel — or any steering wheel at all.

The £8-million (US$12-million) project, part of a larger study of driverless cars funded by the UK government, is just one of many efforts that seek to revolutionize transportation. Spurred in part by a desire to end the carnage from road accidents — about 90% of which are caused by driver error — the race is on to transfer control from people to computers that never doze at the wheel, get distracted by text messages or down too many pints at the pub.

Almost every major car maker is working on some form of automation, as are many electronics companies. But looming over everyone is the Internet giant Google: the company has been widely acknowledged as the world leader in driverless-car research since October 2010, when it announced that it had entered the field a year earlier — and that its driverless test vehicles had already logged more than 200,000 kilometres on roads near its headquarters in Mountain View, California, and elsewhere in the state. The public's enthusiastic response to that revelation galvanized car makers and government research-funding agencies around the world to accelerate their efforts in this arena.

“I've never seen anything move so quickly from concept into products,” says Richard Bishop, an automotive consultant who headed a US Department of Transportation research programme on automated motorways in the 1990s. Although many technical challenges remain, developers say they can see clear paths for solving most or all of them. 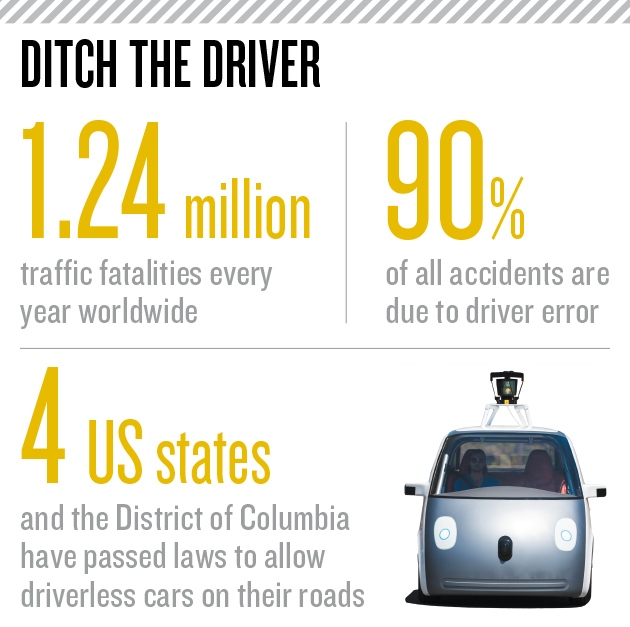 At Google, for example, most of the driverless-car work so far has been carried out using standard passenger vehicles fitted with Global Positioning System receivers and mapping technology, along with radar to detect obstacles, a laser ranging system to scan the surroundings in three dimensions, and video cameras to identify objects such as traffic lights, construction signs, pedestrians and other vehicles (see 'A world of driverless cars'). The on-board computer — with processing power equivalent to several desktop units — integrates all the information and decides how the car should behave in any given situation. To lessen the load on the driving algorithms, Google equips the car with ultra-detailed maps that tell it exactly what to expect, down to the height of every curb.

Sceptics point out that this mapping requirement restricts the car to places that have already been surveyed to that level of precision, such as Mountain View. But it would be relatively easy to expand those maps as part of the company's ongoing efforts to photograph the world's roadways for Google Maps, says Sebastian Thrun, an engineer who founded the Google car project and ran it until 2013.

A tougher problem, says Thrun, is teaching the car how to respond to what he calls “the long tail of unlikely events”. Early on, he says, the Google team developed algorithms for handling frequent, obvious challenges such as intersections or rain-slicked roadways. But as the cars drove for thousands of kilometres, they recorded oddball events such as a plastic bag blowing across the motorway or a couch sitting in the middle of the road. “There were many more of those than we believed in the beginning,” says Thrun. The only way to handle such rare events has been to record them as they arise, devise responses with the help of high-powered machine-learning algorithms — and then test those solutions with simulations and yet more driving.

“If we do it long enough,” says Thrun, “the hope is that the software will be as safe as a human driver” — and eventually much safer. How long that will take remains an open question. Google has publicly estimated about five years — but the company is currently not granting interviews about its project. 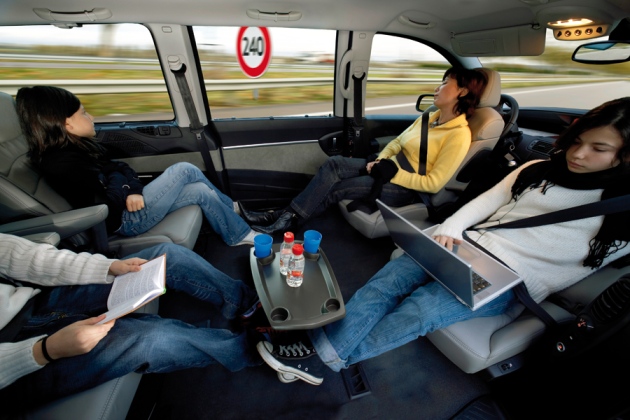 Additional safety could come from equipping cars and trucks with Wi-Fi-like vehicle-to-vehicle (V2V) radios, which would allow them to warn each other of dangerous situations such as a car running through a red light. That would give both driverless and human-operated vehicles time to steer clear.

Although V2V technology will probably be incorporated into driverless vehicles, it has been developed largely through separate efforts. The concept has already been road-tested as part of the European Union's Safe Road Trains for the Environment project, in which lines of cars followed bumper to bumper behind a truck, like ducklings tailing their mother. These road trains, or platoons, avoid catastrophic pile-ups because the V2V signals cues every car to hit the brakes at the same instant as the truck. And because of aerodynamics, the road trains saved at least 10% in fuel consumption.

Such experiments have piqued the interest of the car maker General Motors, which last September announced it will support V2V technology in future models. At first, such cars will have few other vehicles to talk to. But the US National Highway Traffic Safety Administration is looking to issue regulations requiring V2V radios in all new US cars later this decade.

“The vehicles would just be broadcasting a basic safety message: position, speed, direction of travel,” says Josh Switkes, chief executive of Peloton Technology, a start-up firm in Menlo Park, California, that is seeking to commercialize V2V technology for heavy trucks. But that will be enough to eliminate many accidents, he says. Then there are the energy efficiencies — not just from platooning, he says, but from cars working together to minimize stop-and-go traffic, where fuel efficiency is dismal. If the cars can also ask smart traffic lights to adjust themselves to prevailing traffic density — a practice sometime known as Vehicle to Infrastructure (V2I) — then the system might be able to minimize the need to stop at all.

Ultimately, the timescale for deploying these technologies will depend on the answers to much broader questions. How much will they cost? Who will own them — individuals, or service companies that provide transportation on demand? Who will face legal liability when a driverless car gets into an accident? And will people accept and trust them?

Such questions can only be answered through experience. And given the pace of innovation today, experience is accumulating fast.

A world of driverless cars 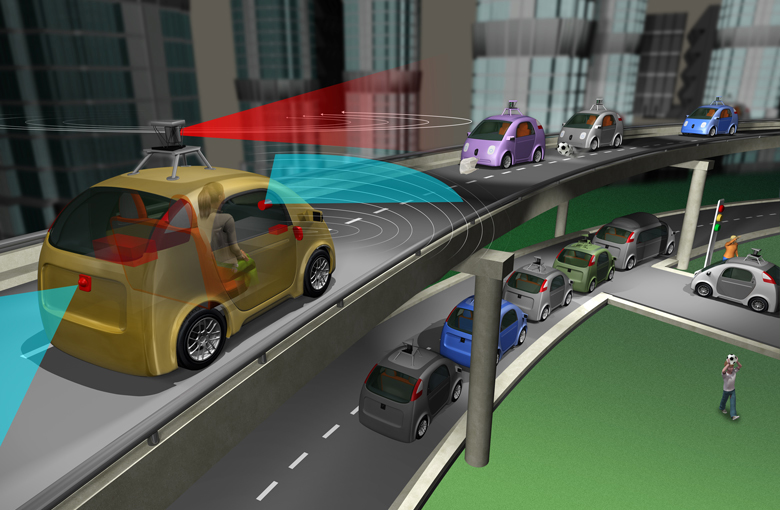