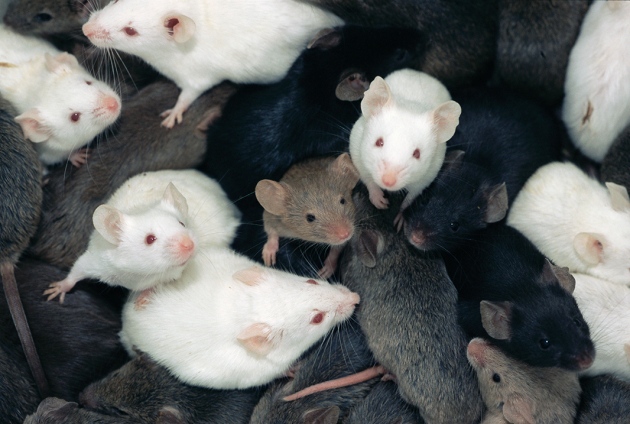 Mice engineered for use as a model of autism can affect the behaviour of wild-type animals kept in the same housing.

Mice that have been genetically modified to develop symptoms of autism spectrum disorder can influence how their unmodified littermates act — causing them to become less social, researchers have found.

The phenomenon could undermine certain experiments that rely on mouse models of autism, and raises questions about the reliability of past results.

Stéphane Baudouin, a behavioural neuroscientist at Cardiff University, UK, was developing an experiment to study autism using mice engineered to lack a gene called neurolignin-3. In humans, mutations in this gene are linked to autism; in mice, they are linked to symptoms similar to those seen in people with the disorder, such as repetitive behaviours and social deficits.

Baudouin noticed that when the knockout mice were kept with control animals that hadn’t been modified, the controls showed no interest in the smell of the urine of other mice — usually a robust test of social behaviour.

“I was completely surprised by that,” said Baudouin. “I was concerned straight away.”

To confirm his suspicion, he and his colleagues observed control mice that had been kept apart from animals lacking neurolignin-3, and saw that the effect disappeared. Turning the neurolignin-3 gene back on in their knockout models also restored typical social behaviour in both the modified mice and the controls that lived with them. Those experiments confirmed that it was the act of keeping both types of mouse together that was causing the change in behaviour. The work is published in eNeuro1.

The effect could extend to other mouse models of autism, says Toru Takumi, a molecular neuroscientist who studies the disorder at the RIKEN Brain Science Institute in Tokyo. Takumi says that he might need to re-analyse all his behavioural experiments and take the effect into consideration for future animal-model studies.

It would not be the first time that researchers questioned the suitability of mice for studying behavioural conditions such as autism. The animals are often accused of being poor predictors of human conditions, and their behaviours can be unsettled by even subtle changes to their diet and handling. Phenotypes, that is, physical or behavioural traits, may not be replicable in a different social environment, says behavioural neuroscientist Mu Yang of Columbia University Medical Center in New York City. And it’s well known that experiments that succeed in one mouse population might not even work in other mice.

In light of these problems, some autism researchers have turned to more social animals, such as rats. And last year, researchers in China reported that they had engineered monkeys with a mutation that causes a disorder similar to autism in humans — which the team says is the most realistic animal model of the condition yet.

Still, issues with mice’s social environment can be minimized by careful experimental design, says Hannelore Ehrenreich, a molecular neuroscientist at the Max Planck Institute for Experimental Medicine in Göttingen, Germany. But she emphasizes that researchers must always be transparent about reporting their animals’ social situation. Too many studies omit crucial details needed to interpret how animals act, such as their housing conditions and genetic background, she says. “The behaviour is often not well described.”

Baudouin’s team also found that modified mice seemed to become even less social and more anxious when kept with control mice; such symptoms were not exacerbated when they were housed with mice that also lacked neurolignin-3. Co-housing seems to “affect wild-type and knockout animals and can lead to improvement or worsening of some features”, says Ehrenreich. That effect is interesting, she says — it could recreate the social stress experienced by people with autism.