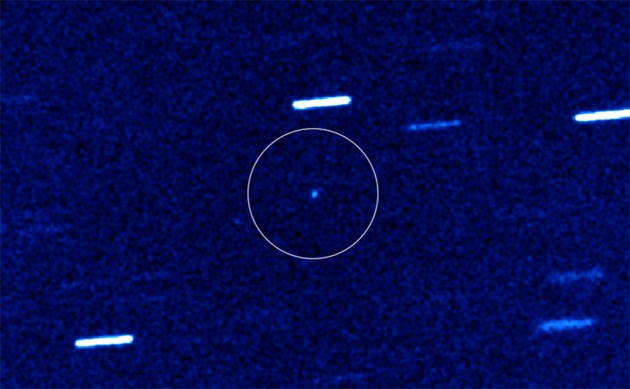 The interstellar asteroid A/2017 U1 (circled) is rushing away from Earth and is currently traversing the Pisces constellation.

Scientists are trying to learn everything that they can from the first interstellar asteroid they have ever observed crossing into our Solar System. Spotted less than two weeks ago, the object is now whizzing across the constellation Pisces and, in a couple of months, will be too faint and far away for even the largest telescopes to see.

“It’s fascinating,” says astronomer David Jewitt of the University of California, Los Angeles. “We are seeing a body from elsewhere in the Galaxy passing through our Solar System. It’s the first time we’ve seen such a thing.”

Unfortunately, the asteroid, dubbed A/2017 U1, is dashing away, never to return. “It’s going really fast,” says Jewitt. “So we have a limited time to get any measurements at all.” Astronomers would love to know what it’s made of, but it’s so dim that spectra — light that observers use to determine the compositions of celestial objects — have so far revealed little information1. Nor can anyone say what solar system it came from, or how old it is.

Researchers with the Pan-STARRS1 telescope atop Haleakala in Maui, Hawaii, spied the first images of the intruder, made during the new Moon, in mid-October. “It didn’t move like comets or asteroids normally do,” says astronomer Rob Weryk at the University of Hawaii at Manoa, who first noticed the object on the morning of 19 October.

Comets and asteroids usually move on elliptical orbits around the Sun. These orbits have an eccentricity — a measure used to describe orbital shape — of less than 1. But an object zipping through the Solar System from beyond should instead follow a hyperbolic orbit, whose eccentricity exceeds 1.

The latest observations of the asteroid’s changing position indicate that its orbital eccentricity is a whopping 1.20. “It is virtually certain that the object moves in a hyperbolic trajectory,” says Carlos de la Fuente Marcos, an astronomer at the Complutense University of Madrid.

The asteroid skirted the Sun on 9 September, when it was inside Mercury’s orbit, and then passed by Earth at a distance of 24 million kilometres on 14 October.

Astronomers know little else about the exotic visitor. It’s faint, which means that it’s small: fewer than 400 metres across. And despite its excursion near the Sun, it did not develop a tail — as a comet would — and so astronomers are currently classifying it as an asteroid.

The path of A/2017 U1, an interstellar object that swung through our Solar System.

Researchers have anticipated interstellar visitors for years. “We have waited a long time,” says planetary scientist Alan Stern at the Southwest Research Institute in Boulder, Colorado, who studied the matter in the 1990s.

That expectation is based on the knowledge that the gravitational pulls of the giant planets Jupiter, Saturn, Uranus and Neptune catapulted trillions of comets and asteroids from the young Solar System into interstellar space. Planets in other solar systems presumably did the same, littering interstellar space with rogue objects. “By measuring how many there are sweeping through our Solar System, we can get a gauge of how many are in the entire Galaxy, and how many solar systems have contributed to that population,” says Stern.

“If one hadn’t been discovered fairly soon, that would start to worry me a bit,” says astronomer David Hughes, emeritus professor at the University of Sheffield, UK.

The asteroid came from the direction of the constellation Lyra, which is roughly where our Solar System is heading. Given this trajectory, researchers are expecting to see more objects coming from this direction than from elsewhere, just as runners heading into the rain encounter more drops on their chests than their backs.

A/2017 U1 is the first of many such objects, predicts Jewitt.