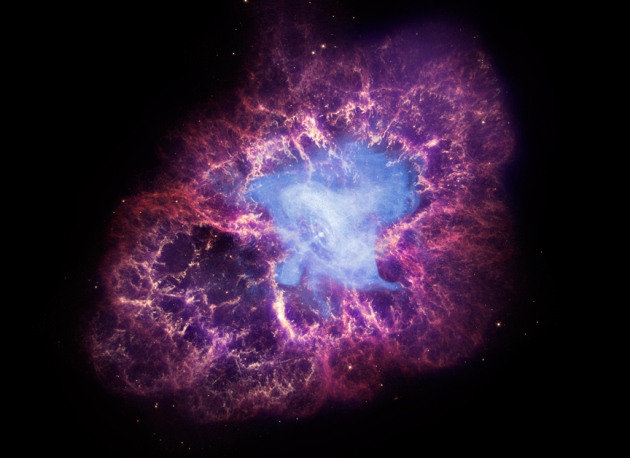 The Crab Nebula is the only source of polarized X-rays that has so far been mapped.

When astronomers in the 1970s first observed polarized X-rays streaming from the Crab Nebula, they opened a new window on the Universe. Since then, scientists have proposed multiple space missions to explore other sources of these rays, such as pulsars, black holes and supernova remnants. Three spacecraft nearly flew — but time and again, space agencies cancelled or passed over these polarimetry missions. So far, the Crab Nebula, a powerful pulsar shrouded by a supernova remnant, is the only source of polarized X-rays that has been mapped.

Now, a competition for a small, US$125-million space mission, announced by NASA on 12 November, has X-ray astronomers eagerly bidding for the chance to launch a dedicated polarimeter that would map hundreds or thousands of sources.

“The situation for polarimetry is so bad, even a small mission would be a breakthrough,” says Enrico Costa, an astrophysicist at the Italian National Institute for Astrophysics in Rome.

Polarization is the oscillation of electromagnetic waves in a particular orientation. It typically encodes geometric information about the direction in which photons are generated. It might be used, for example, to determine the axis of a spinning pulsar.

But these are not easy measurements to make. X-ray astronomy is already a challenge — Earth’s atmosphere absorbs the rays, and so observatories must orbit in space. Capturing X-ray polarization is harder still. The 1970s detectors relied on antennas made of graphite crystals, with atoms separated at the nanometre scale of X-ray wavelengths. Modern detectors use a container of gas: incoming X-rays ionize the gas atoms, which kick off electrons in the direction of the polarization. These electrons are then tracked.

But efficiency is still a problem. It takes about 100 times longer to measure the polarization of an X-ray source than it does to measure its energy and brightness. When projects have been scaled down to save money, polarimeters tend to be the first to go, says Martin Weisskopf, an astrophysicist at NASA’s Marshall Space Flight Center in Huntsville, Alabama, who made the measurements on the Crab Nebula (M. C. Weisskopf et al. Astrophys. J. 208, L125–L128; 1976).

The NASA announcement might change that. Polarimetry enthusiasts are hopeful because in 2009, NASA selected a polarimeter mission called GEMS (Gravity and Extreme Magnetism) for development. It was cancelled in 2012 after managers judged it was likely to run over its $105-million budget. But the GEMS team has since tested detectors that were being developed at the time of cancellation, and is planning to try again. Weisskopf and Costa, meanwhile, are planning to submit a mission concept called XIPE (X-ray Imaging Polarimetry Explorer), which was passed over in 2012 by the European Space Agency.

Either mission could measure the spin of a black hole, which imprints spin geometry on the polarized X-ray light it emits as swirling disks of matter fall into it. The polarimeters could also be used to settle a debate over two theories that describe where and how X-rays are emitted in the atmosphere of pulsars.

NASA astrophysics director Paul Hertz says that the agency remains open to an X-ray polarimetry mission despite cancelling GEMS last year. The competition’s winning mission, which would launch by the end of 2020, will depend on peer review, he says. Dozens of proposals are expected from many fields of astrophysics, including exoplanet research — an extremely hot area. But Weisskopf is optimistic that at last the field he founded in the 1970s can spring to life after being neglected for so long. “The time has come,” he says.