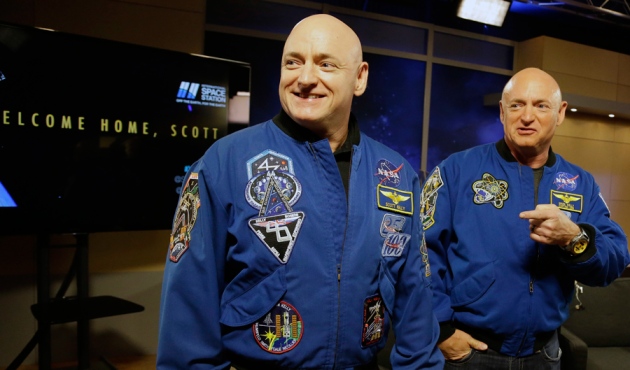 Preliminary results are in from NASA’s unprecedented twin study — a detailed probe of the genetic differences between astronaut Scott Kelly, who spent nearly a consecutive year in space, and his identical twin Mark. Measurements taken before, during and after Scott Kelly’s mission reveal changes in gene expression, DNA methylation and other biological markers that are likely to be attributable to his time in orbit.

From the lengths of the twins’ chromosomes to the microbiomes in their guts, “almost everyone is reporting that we see differences”, says Christopher Mason, a geneticist at Weill Cornell Medicine in New York City. He and other project scientists reported the early results on 26 January in Galveston, Texas, at a meeting of scientists working in NASA’s Human Research Program. “The data are so fresh that some of them are still coming off the sequencing machines,” Mason says.

The challenge now is to untangle how many of the observed changes are specific to the physical demands of spaceflight — and how many might be simply due to natural variations. And because the Kelly twins are just two people, the results may not be generalizable to others.

Still, the work is some of the most detailed molecular profiling ever done, involving some of the most physically demanding environments. “The greatest importance of the study is to show that we can do it,” says team member Andrew Feinberg, a geneticist at Johns Hopkins University School of Medicine in Baltimore, Maryland. “I don’t think people realized it would be so easy to do genomics on astronauts in space.”

Because the two men have almost identical genomes and similar life experiences, NASA arranged to have blood and other biological samples taken from them to try and observe biological changes brought about by long-duration spaceflight.

Studies of the twins' telomeres, the caps on the ends of their chromosomes, showed that during spaceflight Scott's telomeres grew to be longer than his brother's. “That is exactly the opposite of what we thought,” says Susan Bailey, a radiation biologist at Colorado State University in Fort Collins. A second lab has studied the same samples and confirmed this puzzling increase in telomere length, she says.

Once Scott returned to the ground, the length of his telomeres returned to his pre-flight levels relatively quickly. The scientists are working to figure out what this means, and are running a separate study of telomere length in ten unrelated astronauts that, when completed in 2018, may shed more light on how spaceflight affects telomeres.

DNA methylation — the reversible addition of a chemical marker to DNA that can affect gene expression — decreased in Scott during flight and increased in Mark over the same period, Feinberg says. Levels for both men returned close to preflight levels after Scott came back to Earth. What this means isn’t yet clear, Feinberg says.

Mason’s team also reported changes in gene-expression signatures between the twins. Such changes happen in earthbound people all the time, associated with environmental shifts such as changes in diet and sleep habits. But the changes in Scott seemed to be larger than normal — perhaps due to the stress of eating freeze-dried food and trying to sleep while floating in space.

Personalized medicine could play into NASA’s plans for how to keep astronauts healthy during long-duration spaceflight, such as any future trips to Mars. For instance, the agency might want to use genetic tests to screen astronaut candidates for cancer susceptibility, says a 6 January report from the US National Academies of Science, Engineering and Medicine.

Actually publishing the results of the twin study will take some time, and the full data may never come out. Because of the detailed nature and sheer amount of the genetic information involved in the studies, the Kelly twins will review all information before it is published, to avoid revealing sensitive data they may wish to keep private.