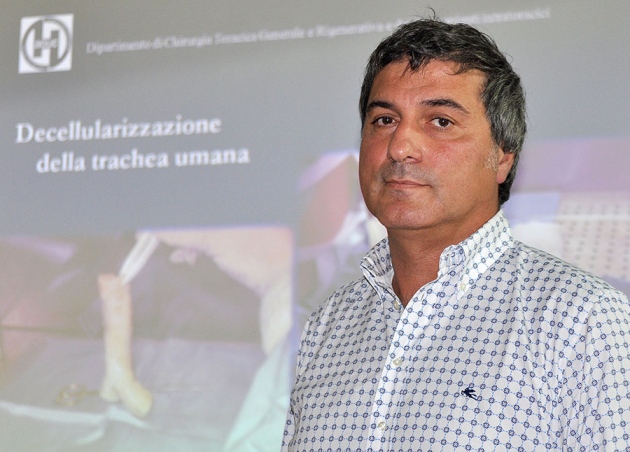 Paolo Macchiarini says he is happy to hear the decision about his work.

Paolo Macchiarini, the surgeon who conducted pioneering transplants of bioengineered tracheas, did not commit scientific misconduct when he reported on the success of the procedure in a selection of patients, according to the vice-chancellor of the Karolinska Institute in Stockholm, where Macchiarini is a visiting professor.

The vice-chancellor's decision marks the end of the institute's current investigation into a tranche of seven papers co-authored by Macchiarini, and runs counter to the opinion of an independent investigator commissioned by Karolinska, who concluded in May that Macchiarini had committed misconduct when reporting the findings.

Announced on 28 August, the decision was based on more than 1,000 pages of documents submitted by Macchiarini and his co-authors in response to the independent report, as well as the documents available to the independent investigator. Karolinska vice-chancellor Anders Hamsten, the author of the latest report, says that the work in question “does not meet the university’s high quality standards”, but did not find misconduct. The report notes that “the submission of an erratum could therefore be appropriate”.

“I’m mostly exhausted,” Macchiarini told Nature's news team. “Of course, I am happy finally it has been proven that we are not guilty and never committed any false interpretation or holding off of data. That's the most important thing.”

One of the papers in question, published in The Lancet in 20111, described the use of a synthetic trachea seeded with stem cells that Macchiarini had implanted into a patient at Karolinska; five other papers concerned that first patient or subsequent patients who underwent the same procedure at Karolinska. The seventh paper2, published in Nature Communications, describes the implantation of a synthetic oesophagus into a rat and a subsequent computed-tomography scan to verify its function.

Karolinska began investigating those papers following allegations in June and August 2014 by four physicians at the institute, who said that the findings in the first six papers did not agree with the medical records of the patients concerned, and that there was also a problem with the seventh paper.

In May, the independent investigator Bengt Gerdin, a general surgeon and professor emeritus at Uppsala University in Sweden, agreed that there were problems with the papers describing the procedure in humans. In particular, Gerdin said that there was no evidence for the dramatic improvement claimed in the 2011 Lancet paper concerning such things as blood-vessel formation into the grafted trachea, one of the crucial conditions for survival and proper function of the graft.

But according to Hamsten’s report, despite “deficiencies” in the papers, the main issues “have been satisfactorily countered by Macchiarini and his co-authors, and so there is nothing to support the complainants’ suspicions of scientific misconduct”.

Gerdin had also said that the Nature Communications paper constituted misconduct. But Hamsten disagreed with that as well, although he agreed that the paper did have shortcomings. “The question remains whether there was a correct interpretation of the images,” says Hamsten. But he told Nature's news team that this is a question of scientific quality, not misconduct.

In his report, Hamsten says that other flaws in the Nature Communications paper pointed out by Gerdin “do not represent unequivocal departures from accepted scientific practice but are the result of inattentiveness, haste, ignorance or carelessness”.

Gerdin says that he cannot comment on Hamsten’s ruling because he has not seen the 1,000 extra pages supplied since his report. But he questions whether the final decision should be made before he has reviewed the documents. “What’s the point of having an external reviewer at that point?”

Hamsten says that some of the “hard facts” that Gerdin wanted “were not to be found” in the original documents submitted by the physicians. Asked why he did not give Gerdin another chance to look at the full set of documents, including the co-authors' responses, Hamsten says that Gerdin “pointed to the key problems” but that Hamsten himself had to make the final decision.