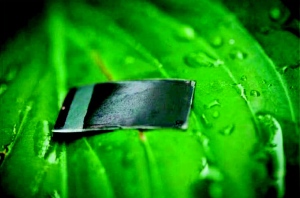 The 'artificial leaf' concept is elegant, but not yet ready to move out of the lab.

Not all prototypes make it out of the laboratory, but the 'artificial leaf' is so elegant that its design seems to beg for commercial production. Described in Science last year1 by a team led by Dan Nocera at the Massachusetts Institute of Technology, the catalyst-coated wafer is a silicon version of a photosynthesizing leaf: it turns sunlight into storable fuel by splitting water into oxygen and hydrogen.

But Sun Catalytix, the company founded in Cambridge off the back of Nocera's work, says that it won’t be scaling up the prototype for field tests. The device offers few savings over other ways to make hydrogen from sunlight, the company says.

“We have to be focused on what will be durably better than conventional ways to make renewable hydrogen,” explains chief technology officer Tom Jarvi. Hydrogen from a solar panel and electrolysis unit can currently be made for about US$7 per kilogram, the firm estimates; the artificial leaf would come in at $6.50. (It costs just $1–2 to make a kilogram of hydrogen from fossil fuels).

With the prices of solar cells dropping all the time, the firm is not going to make a heavy investment that's unlikely to pay off. Instead, it is looking at cheaper designs — but these require yet-to-be-invented semiconductor materials. So for the moment, “the artificial leaf is in the fridge”, Sun Catalytix chemist Joep Pijpers says.

That decision is disappointing but not surprising. Both Sun Catalytix and a report commissioned by the US Department of Energy2 have found that the cost of systems to produce hydrogen from sunlight is dominated by the engineering costs of the photovoltaic (light-harvesting) infrastructure, mainly because of the sheer mass of material required, including frames, substrates and materials to protect the semiconducting silicon from damage.

That is also true for the artificial leaf, says Pijpers. The design improves on previous attempts3 to couple light-harvesting solar cells and water-splitting catalysts into one device because it uses cheap, abundant catalysts and does not require extremely acidic or alkaline solutions. It is not, however, very efficient, converting only about 2.5% of the energy it gets from sunlight into chemical bonds (although that's still an improvement on plant leaves, which average 1%).

The path to cheaper solar hydrogen probably lies in cutting down the expense of the light-harvesting part of the system. One solution may be to resculpt the silicon into flexible micrometre long wires; another could be to avoid silicon altogether, in favour of solar cells made from other kinds of semiconductors, or perhaps organic materials.

Sun Catalytix's current thinking is to keep the wireless design of the artificial leaf, but to reduce engineering costs by scattering a slurry of small particles through water, rather than having slabs of silicon. The snag is that simply cutting up the artificial leaf into small particles won’t work. One panel of silicon doesn't produce enough voltage to split water, so the leaf links up three panels to gain voltage in much the same way as batteries do when connected in series. But that’s not an option in a nanoparticle design. The firm is therefore looking to other light-harvesting materials, such as iron oxide. The advantage of such already-oxidized materials is that they need less protection from the oxygen produced during water-splitting, but it is also hard to get at the electric charges created when iron oxide absorbs photons.

There are other ways to reduce costs, says Nocera. For example, a dye-impregnated plastic could be used to absorb the light, then pass the photons on to the silicon to generate the current for photo-catalysts. This would cut down on the amount of silicon needed. Jarvi agrees that the panel configuration could probably be made cheaper — another option is to concentrate the sunlight to cut down on the area over which the panels would have to be installed, he says. But for now, Sun Catalytix — which is backed by the multinational conglomerate Tata Group and has received a $4-million grant from the energy department’s Advanced Research Projects Agency-Energy (ARPA-E) — has decided not to focus on this approach.

Although the prototype doesn't offer significant savings over wired solar panels for the moment, the artificial leaf concept is still considered inspirational, bringing money and attention to the field of solar fuels, chemists said at a meeting at Imperial College London on 18 May. “When I came into this field, there was nothing close to a wafer you could drop into water and see hydrogen and oxygen bubbling off,” said Philipp Kurz, an inorganic chemist at the University of Kiel in Germany. “The artificial leaf is important in its design and simplicity,” Nocera adds.

This article’s title and stand-first has been corrected to clarify that SunCatalytix has not changed its objective to commercialize a wireless solar-hydrogen device with earth-abundant materials.