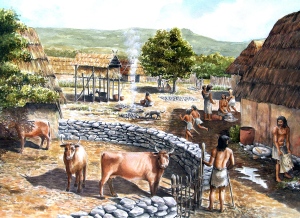 Neolithic dairies may have been producing cheese as early as 7,500 years ago

Traces of dairy fat in ancient ceramic fragments suggest that people have been making cheese in Europe for up to 7,500 years. In the tough days before refrigerators, early dairy farmers probably devised cheese-making as a way to preserve, and get the best use out of, milk from the cattle that they had begun to herd.

Peter Bogucki, an archaeologist at Princeton University in New Jersey, was in the 1980s among the first to suspect that cheese-making might have been afoot in Europe as early as 5,500 bc. He noticed that archaeologists working at ancient cattle-rearing sites in what is now Poland had found pieces of ceramic vessels riddled with holes, reminiscent of cheese strainers. Bogucki reasoned that Neolithic farmers had found a way to use their herds for more than milk or meat1.

In a paper published in Nature2, Bogucki and his collaborators now confirm that theory, with biochemical proof that the strainers were used to separate dairy fats. Mélanie Salque, a chemist at the University of Bristol, UK, used gas chromatography and carbon-isotope ratios to analyse molecules preserved in the pores of the ancient clay, and confirmed that they came from milk fats. “This research provides the smoking gun that cheese manufacture was practiced by Neolithic people 7,000 years ago,” says Bogucki.

“This is the first and only evidence of [Neolithic] cheese-making in the archaeological record,” says Richard Evershed, a chemist at Bristol and a co-author of the paper. The finding, he adds, is not only an indication that humans had by that time learned to use sophisticated technology, but is also evidence that they had begun to develop a complex relationship with animals that went beyond hunting. “It’s building a picture for me, as a European, of where we came from: the origins of our culture and cuisines,” he says.

Cheese-making would have given the Neolithic farmers a way to make the most out of the resources available from their herds. Early humans were unable to digest milk sugars, or lactose, after childhood; however, traditionally made cheese contains much less lactose than fresh milk. “The making of cheese would have allowed them to get around the indigestibility of milk without getting ill,” Evershed says.

“It’s one small step, but it’s filling out the picture of that transition from nomadism,” says Heather Paxson, a cultural anthropologist at Massachusetts Institute of Technology in Cambridge, who studies US artisan cheese-makers. She suggests that Neolithic people might have curdled their milk with bacteria that are found in nature, resulting in a clumpy version of modern mozzarella.