After 18 months of controversy, the official verdict is in: an arsenic-tolerant bacterium found in California’s Mono Lake cannot live without phosphorus.

In 2010, a group led by Felisa Wolfe-Simon, a microbiologist now at the Lawrence Berkeley National Laboratory in Berkeley, California, reported online in Science1 that the Halomonadaceae bacterium GFAJ-1 could include atoms of arsenic instead of phosphorus in crucial biochemicals such as DNA. 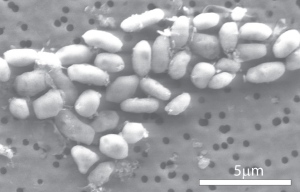 GFAJ-1 bacteria can live in high concentrations of arsenic — but do not incorporate the element in to their DNA.

The bacteria were discovered thriving in the arsenic-rich sediment of the shallow saline Mono Lake, famed for its appearance on a picture-postcard insert to Pink Floyd’s 1975 album Wish You Were Here.

All known forms of life depend on at least six elements: hydrogen, carbon, nitrogen, oxygen, phosphorus and sulphur. Arsenic has some chemical similarities with phosphorus, but is usually toxic to life, so the suggestion that it could sustain life triggered a storm of questions, as well as criticism about how the find was revealed at an enthusiastic NASA press conference (see ‘Microbe gets toxic response’).

As a result of the controversy, when Wolfe-Simon's paper appeared in print in Science last June, it was accompanied by eight technical comments2–9 from scientists responding to it.

Rosie Redfield, a microbiologist at the University of British Columbia in Vancouver, Canada, set about testing the finding. Earlier this year, she said that she could not reproduce Wolfe-Simon’s results in laboratory experiments (see ‘Study challenges existence of arsenic-based life’).

Redfield is now a co-author of one of two papers that confirm that, although the bacteria can tolerate arsenic, they do depend on phosphorus. The papers were published10, 11 by Science on 8 July.

Redfield and her colleagues report10 that when GFAJ-1 bacteria were grown in a medium containing arsenic and a very small amount of phosphorus, their DNA contained no detectable arsenic compounds, such as arsenate (the arsenic analogue of phosphate). In the second paper, Julia Vorholt, a microbiologist at the Federal Institute of Technology in Zurich, Switzerland, and her colleagues report11 that the bacterium cannot grow in a phosphorus-free medium in the presence of arsenate. It can, however, grow in low-phosphate conditions in the presence of arsenate. GFAJ-1 “is an arsenate-resistant, but still a phosphate-dependent bacterium”, the team writes.

“I think we have now very solid evidence that the metabolism of GFAJ-1 is as dependent on phosphorus, as are all other known forms of organic life,” says Vorholt. “These very robust and very well-adapted microbes appear to be able to efficiently extract nutrients from their extremely phosphorus-poor environments.”

The samples that Wolfe-Simon’s team had used for their original experiments apparently contained larger concentrations of phosphorus than was first thought, Vorholt adds.

In a statement, Science said: “The new research shows that GFAJ-1 does not break the long-held rules of life, contrary to how Wolfe-Simon had interpreted her group’s data.”

"The original GFAJ-1 paper emphasized tolerance to arsenic, but suggested the cells required phosphorus, as seen in these two new papers," says Wolfe-Simon. "However, our data implied that a very small amount of arsenate may be incorporated into cells and biomolecules, helping cells to survive in environments of high arsenate and very low phosphate. Such low amounts of arsenic incorporation may be challenging to find and unstable once cells are opened."

The story of GFAJ-1 is far from over, she adds. "The key questions are: how do these cells thrive in lethal concentrations of arsenic? And where does the arsenic go?"