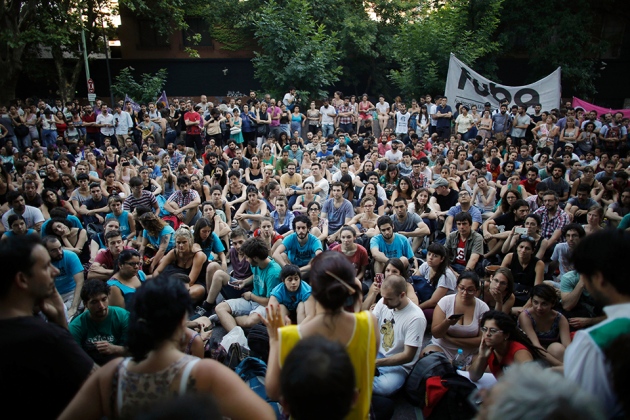 Researchers at an assembly outside the science ministry in Buenos Aires, Argentina.

The occupation was the most extreme action yet by Argentinian scientists after months of protests at last year’s budget, the first under President Mauricio Macri. And the occupation seems to have paid off, in part: many of those involved have been offered extensions to their fellowships.

“The peaceful occupation of the ministry is an extreme measure, but we did not have any other option”

In the week from 19 December, around 200 people slept overnight in the ministry building, and more than 1,000 joined rallies outside. Then, on 23 December, ministry officials agreed to a compromise that dispersed the crowds. There would be no extra permanent research positions, but hundreds of scientists on temporary CONICET fellowships have been offered at least a year’s extension to their contract.

“Our protest worked. It was a historic event. It prevented hundreds of young scientists from being left without wages,” says psychologist María Julia Hermida, who took part in the protests. Hermida is on a CONICET-funded fellowship at the privately run Center for Medical Education and Clinical Research in Buenos Aires; she had hoped for a permanent CONICET job, but is making do with the fellowship extension.

Still, the deal hasn’t solved researchers’ problems, scientists say. “The agreement was just a palliative solution,” says Andrés Cernadas, a geneticist at the University of Buenos Aires school of agronomy. On 29 December, some 200 scientists met at Córdoba National Observatory to discuss how to continue their campaign for new permanent jobs and a higher science budget.

CONICET, a research institute that employs some 9,600 research staff, had hoped to expand its staff by 10% each year until 2019, following a national innovation plan that was announced in 2013. And the agency seemed to be on track to meet that goal. When Macri became president in December 2015, he pledged to boost Argentina’s science spending further. Accordingly, some 1,500 scientists applied last year for new CONICET jobs (to start in 2017), and 874 of them received positive evaluations — a recommendation that would normally lead to a salaried position.

But Argentina’s science budget, passed on 30 November, gave CONICET only a 6% pay rise, once inflation is taken into account — meaning that the council could hire only around half of its recommended applicants. Groups of young researchers and trade-union representatives marched on CONICET’s building in protest, and then decided to occupy the science ministry, next door.

“I know the peaceful occupation of the ministry is an extreme measure, but we did not have any other option,” says Julieta Haidar, a political scientist at the University of Buenos Aires, and one of those who slept in the ministry overnight. The occupation didn’t disrupt the work of ministry employees, she says. People who lived in nearby apartments brought the occupiers pizza and drinks. The protest was also supported by senior Argentinian scientists, some of whom turned up mid-week to deliver speeches. 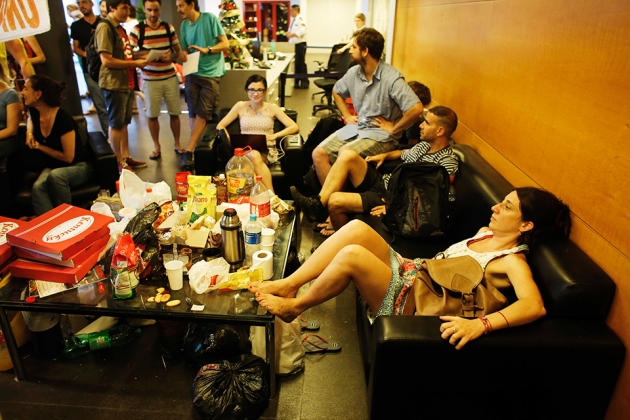 The compromise deal means that about 400 researchers (including Haidar and Hermida) have had their CONICET fellowships extended to the end of 2017 or, in some cases, to March 2018 — and around 100 have been given new fellowships. Some scientists will work at other Argentinian institutes or universities, albeit on CONICET’s payroll. Funding for the positions will be reassigned from CONICET’s existing budget, Argentina’s science minister, Lino Barañao, told Nature, although he did not make clear which areas would be cut. Barañao also said that increasing CONICET’s staff by 10% each year no longer looks realistic.

The occupation shows the depth of feeling in the science community against budgetary restrictions put in place under Macri, says Rolando González-José, an evolutionary biologist who directs the Patagonian Institute of Social Sciences in Puerto Madryn.

He is part of a group of concerned scientists, called Science and Technology Argentina, who in October coordinated a petition against Macri’s first budget, which had proposed deeper cuts for science. “It is clear that in Argentina and other Latin American nations, technological innovation is now not seen as the key to economic development,” he says.