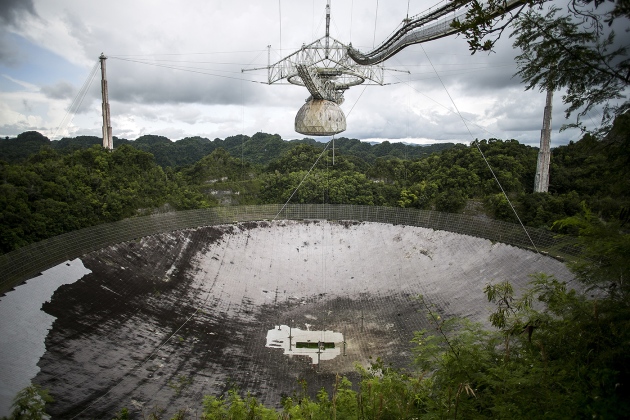 The massive dish of the Arecibo radio telescope measures 305 metres across.

Nearly two months after Hurricane Maria devastated Puerto Rico, the people who operate one of the world’s pre-eminent radio telescopes — at the Arecibo Observatory, on the northwestern part of the island — are still without reliable water, electricity and phone service at their homes. But their jobs seem to be safe.

The US National Science Foundation (NSF), which funds about two-thirds of the observatory’s annual US$12-million budget, has decided to continue operating it in collaboration with as-yet-to-be-decided partners. Over the next 5 years, the agency will reduce its annual contribution from $8.2 million to $2 million, with the rest coming from the unspecified partner institutions.

“This is very good news for the Arecibo Observatory and a huge win for the scientific community in general,” says Francisco Córdova, the observatory's director. “There is definitely a sense of relief in the air.”

The decision comes as part of the NSF’s years-long effort to offload several of its astronomical research facilities to free up millions of dollars each year for future projects, such as the Large Synoptic Survey Telescope that is under construction in Chile.

“We have worked very hard to help bring Arecibo to a state where we still have cutting-edge research there, but with NSF not having to make the same investment that we've made historically,” says James Ulvestad, acting assistant director for the agency’s mathematical- and physical-sciences directorate.

The current management contract at the observatory will expire on 31 March 2018. Earlier this year, the NSF asked potential partners to come forward with ideas and funding offers to keep science operations going. Now, having made its commitment to continue funding the observatory official, the NSF can move forward with negotiating a collaboration agreement and revealing who its partners will be.

The agency’s decision is a welcome reprieve for the roughly 120 Arecibo staff who have suffered and rallied in Maria’s wake. Hurricane-force winds blasted Puerto Rico on 20 September, downing power lines and damaging buildings across the island. Torrential rains washed out roads and knocked out water supplies.

At the observatory, which is nestled into the limestone mountains above the city of Arecibo, some of the staff sheltered in place during the worst of Maria. The observatory’s concrete bunkers, built by the US government in 1963, weathered the storm with little problem. Still, Maria’s winds tore down the 29-metre-long ‘line feed’ antenna that stretched across the observatory’s 305-metre-wide dish, puncturing its aluminium skin in places.

Staff went to work helping to clear roads around the region, and government officials used the observatory’s helipad as a distribution point for supplies. The facility’s deep well supplied hundreds of local residents who had no other source of clean drinking water.

Within weeks, the Arecibo dish was cleaned up and back to doing science. On 29 September, it resumed taking observations, in a low-power mode that lets the sky drift across the field of view; on 7 November, it resumed pointing the dish at specific areas of the sky. The telescope has already observed a fast radio burst, one of a new class of astronomical phenomena that Arecibo is well suited to study with its enormous dish. Last week, the observing schedule expanded to include work at additional radio frequencies, Córdova says.

But telescope operations are still running off generators, and diesel is a precious commodity on the island, says Nicholas White, senior vice-president for science at the Universities Space Research Association in Columbia, Maryland, which helps to manage the observatory. “That’s the biggest constraint — just getting back on the grid,” he says.

Without a reliable power supply, the observatory cannot restart its planetary radar, which tracks and characterizes near-Earth asteroids. NASA supplies $3.7 million — about one-third of Arecibo’s budget — for this work.

The NSF estimates that it will take between $4 million and $8 million to fix the hurricane damage at the observatory, Ulvestad says. The agency “intends to repair Arecibo to its pre-hurricane condition”, he says.

The NSF decision makes Arecibo the first of the agency's astronomical facilities to have completed a full environmental-impact review of its operations, with an eye towards divestment. The agency is working through a similar process to potentially divorce itself from the Green Bank Observatory in West Virginia, home to the world’s premiere single-dish radio telescope, and several other observatories.

Arecibo occupies a unique place in the history of radio astronomy. On 16 November 1974, it beamed the most powerful intentional message ever sent in the hope of contacting extraterrestrial life. In the same year, it was used in the discovery of the first known binary pulsar, whose change in orbital period provided the first indirect evidence for gravitational waves — the ripples in space-time predicted by Albert Einstein.

“People have been telling us for five years: ‘You guys are just out to close Arecibo,’” says Ulvestad. “This is a demonstration that that was not what we were ever out to do.”