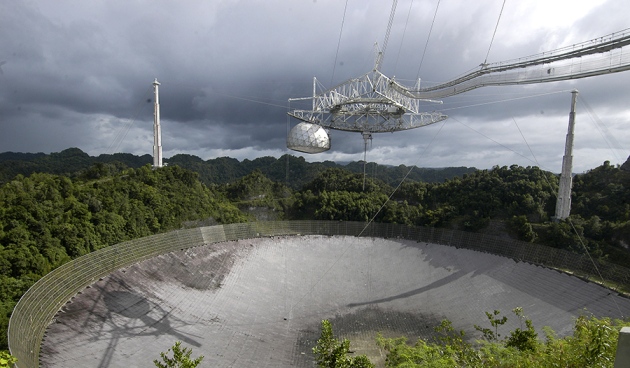 The Arecibo Observatory has one of the world's biggest single-dish telescopes.

Two former researchers at the troubled Arecibo Observatory in Puerto Rico have filed a lawsuit claiming that illegal discrimination and retaliation led to their dismissal.

James Richardson and Elizabeth Sternke are suing the Universities Space Research Association (USRA), which oversees radio astronomy and planetary science at Arecibo, and the observatory’s deputy director, Joan Schmelz — a prominent advocate for women in astronomy.

Richardson and Sternke, a married couple in their mid-50s, allege that Schmelz discriminated against them because of their age and because Richardson is legally blind. Soon after Sternke revealed in November 2015 that she planned to file a complaint with the US Equal Opportunity Commission (EEOC), which investigates workplace bias, USRA announced that her contract job with Arecibo’s education programme would end early. Richardson filed his own EEOC complaint, and in April 2016, USRA terminated his employment as a staff scientist.

The EEOC ultimately found evidence of discrimination and that Sternke and Richardson were terminated in retaliation for their complaints, according to documents provided by the researchers' lawyer. In their lawsuit, filed on 4 October in the US District Court in Puerto Rico, Richardson and Sternke are seeking more than US$20 million in back pay and damages.

Schmelz says that she cannot comment on the lawsuit, and declined to answer Nature's questions. But USRA, her co-defendant and employer, “firmly denies these allegations and plans to vigorously defend this matter”, it said in a statement to Nature.

The legal challenge comes as the 53-year-old observatory battles to survive. Its single-dish radio telescope, one of the world’s biggest, is still in high demand. But the US National Science Foundation (NSF), which provides roughly two-thirds of the observatory’s $12 million funding, is facing a budget crunch. The agency is now conducting an environmental review of major changes to the site, a possible prelude to mothballing or even demolishing the facility. The NSF’s decision on Arecibo’s fate is expected in 2017.

Some Arecibo supporters worry that the lawsuit could nudge the observatory closer to the edge. “With all those budget difficulties they’re having now, getting bad press is not going to be good for them,” says Alan Harris of the planetary-science consulting firm MoreData! in La Cañada, California.

USRA hired Richardson in 2014 as a scientist with Arecibo’s planetary radar group, which observes potentially dangerous asteroids and other Solar-System bodies. He did not follow the typical academic path: according to Richardson’s website, he worked as a nuclear engineer — including a stint on a US Navy submarine — before being blinded in a chemical accident and re-training as a planetary scientist. In 2014, Sternke, a sociologist who was Richardson’s fiancée at the time, joined him at Arecibo and later began working at the observatory on a short-term contract in 2015.

According to EEOC determinations issued in June, Sternke and Richardson’s work initially drew no complaints from management. After Richardson’s boss, the head of planetary radar, announced his resignation in early 2015, Richardson sought the job.

Several months later, Schmelz took up her post at Arecibo. From the start, the lawsuit says, Schmelz “ignored and/or chose to avoid all contact” with Richardson, assigned duties to younger colleagues rather than to him, and “marginalized and ostracized” Richardson and Sternke.

The EEOC report also says that USRA altered the description of the job Richardson wanted “to make it more suitable for another internal candidate to qualify”. USRA subsequently promoted an Arecibo staffer in his 30s.

Sternke submitted her resignation in November, the EEOC says. She later told USRA that she planned to file a complaint with the EEOC, the agency’s report says, and was terminated on 4 December, eight days before her scheduled last day.

The lawsuit alleges that in December of 2015, officials from the USRA human-resources department accused Richardson of “angry behavior, bullying, and prejudices”. He was terminated in April 2016 after USRA determined that he failed to meet the terms of its 'Performance Improvement Plan'. (Richardson disagrees with that assessment.)

In its report on Richardson’s case, the EEOC said Schmelz “made direct discriminatory age based comments”, writing in her own performance evaluation that she had recruited “a set of effective young leaders”.

The EEOC also found that Richardson was “disciplined and terminated from his employment” on the basis of his age and disability, and in retaliation for his association with Sternke and for filing an EEOC charge. In a separate report, the agency found that USRA terminated Sternke’s employment “due to her age (over 50) and in retaliation for complaining about illegal discrimination”.

The EEOC suggested that USRA pay Richardson $400,000 in damages, plus back pay, and give Sternke $200,000. But settlement talks with the EEOC failed, and in late July the agency notified Richardson and Sternke that they had 90 days to file suit.

Richardson’s former colleagues say that he is not a bully. “I never heard him raise his voice, let alone get angry,” says Phillip Nicholson, an astronomer at Cornell University in Ithaca, New York, where Richardson did research.

His postdoctoral supervisor at Cornell, astronomer Joseph Veverka, describes Richardson as courteous and kind, if demanding. “If anyone asked Jim to do something which he did not consider completely scientifically proper, he would strongly object.”

Meanwhile, former Arecibo director Robert Kerr says that his USRA colleagues — including Schmelz — displayed “the utmost professionalism”. “Joan was no different from the rest,” he adds.

Meg Urry, an astrophysicist at Yale University in New Haven, Connecticut, notes that Schmelz is a tireless advocate for the right of female astronomers to work without harassment. “She's devoted a lot of time to justice,” says Urry, the past president of the American Astronomical Society. In one notable case, Schmelz helped to bring harassment complaints against astronomer Geoff Marcy; after the University of California, Berkeley, found that Marcy violated its policies on harassment, he retired in late 2015.

The district court in Puerto Rico has not yet scheduled a hearing on Richardson and Sternke’s lawsuit. In the meantime, Nicholson is struggling to make sense of the situation, given what he knows of the parties on both sides. “Nothing seems to ring true to the character of the people,” he says.