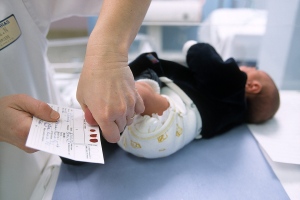 Blood spots routinely collected from infants could provide a snapshot of a person's epigenome at birth.

Most babies born in developed countries share a common painful experience — a heel prick that is done soon after birth. Blood from this is deposited onto a slip of paper, called a Guthrie card, which doctors use to screen for devastating and sometimes fatal diseases. A study published today in Genome Research suggests that these cards, which are sometimes stored for decades, could provide an early snapshot of how conditions in the womb affected an individual’s epigenome, the chemical changes that influence gene expression and are likely to have a role in heart disease, diabetes, cancer and other diseases1.

Guthrie cards provide “extremely valuable information on how the epigenome looks after birth and before disease starts to develop,” says Bas Heijmans, an epigenomics researcher at Leiden University Medical Center in the Netherlands, who was not involved in the study. But Guthrie cards aren’t always easy for researchers to access, and some people have raised concerns about the ethics of using them for research.

One way to pinpoint epigenetic changes that might affect a disease is to search for differences between the epigenomes of healthy people and those with the disease — so-called epigenome-wide association studies. But because the epigenome changes over time, the differences may be the result of the disease rather than the driver. “We can't tell what is cause and what is consequence,” says Vardhman Rakyan, an epigenetics researcher at Queen Mary University of London and an author on the paper. Guthrie cards could help to address this problem by giving researchers the epigenetic profile that existed before the individual became ill, Rakyan says. “It’s kind of like going back in time.”

This isn’t the first time people have proved the feasibility of gleaning epigenetic information from Guthrie cards2, but Rakyan and his colleagues also looked at epigenetic differences. They looked specifically at DNA methylation, a particular type of epigenetic change that involves the addition of methyl groups to DNA.

The researchers used Guthrie cards to examine the DNA methylation patterns of three healthy children born in 1999 and 2000, who were participants in a long-term Swedish study on diabetes prediction. They found about a dozen differences that didn’t seem to be linked to underlying genetic variation. These differences seemed to be stable: when the researchers examined blood samples taken from the same individuals three years later, the differences were still there. The fact that they were not linked to genetic variability suggests that they may be the result of differences in conditions encountered in the womb, Rakyan says.

Accessing this resource, however, may prove challenging. Although many countries collect Guthrie cards, not every country hangs onto them for decades. In the Netherlands, for example, the cards can only be kept for five years, Heijmans says, so they can’t be used to study diseases that develop in adulthood. In the United States, regulations vary from state to state. “There are a number of states that store these samples indefinitely, while others destroy them within a year of collection,” says Aaron Goldenberg, a bioethicist at Case Western Reserve University in Cleveland, Ohio. And not every state grants researchers access to the cards.

Even when Guthrie cards are available, the fact that they can be filed and later used for research, in some cases without explicit parental consent, makes privacy advocates uneasy. One advocacy group, the Citizens’ Council for Health Freedom, has made it increasingly difficult for researchers to use the cards in Minnesota (see ‘Newborn screening: A spot of trouble’). Last year, the Minnesota Supreme Court ruled that Guthrie cards cannot be stored or used for research unless the health department gets parental consent. “States are currently facing the challenge of trying to figure out how to utilize this potential resource in a way that can benefit the health of the public and, at the same time, respect parents' interest in making choices about what happens to their newborns' blood samples,” Goldenberg says.