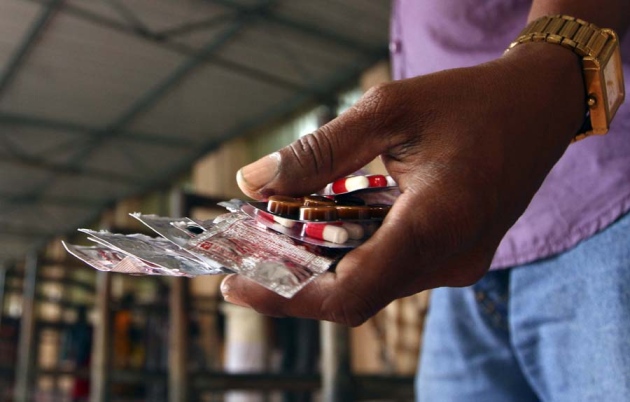 Antibiotics can be bought without a prescription in many countries, and overuse of the drugs is fuelling the evolution of resistant microbes.

By most standards, the increasing availability of life-saving antibiotics in the developing world is a good thing. But, around the globe, overuse of these drugs has created resistant strains of deadly bacteria — and they could be a greater threat in poorer nations than in richer ones, owing in part to a lack of regulation.

Such concerns come amid a stark warning from the World Health Organization (WHO) on 30 April (see go.nature.com/c2l7ry). The world, it says, is poised to enter a ‘post-antibiotic’ era. And in some places, that era has already arrived. In Nigeria, for instance, some studies suggest that as many as 88% of Staphylococcus aureus infections cannot be treated with methicillin — once a potent weapon against the microbe. The problem also seems to be particularly acute in the emerging economies known as the ‘BRIC’ states: Brazil, Russia, India and China, says Keith Klugman, an epidemiologist for the Bill & Melinda Gates Foundation in Seattle, Washington.

Up to 95% of adults in India and Pakistan carry bacteria that are resistant to β-lactam antibiotics — which include carbapenems, considered to be antibiotics of ‘last resort’ — according to research by Timothy Walsh, a medical microbiologist at Cardiff University, UK, that is due to be published in The Lancet. By comparison, only 10% of adults in the Queens area of New York carry such bacteria. The spread of resistance is “more than we could have imagined”, Walsh says.

And these are only the microbial threats that researchers know about. The WHO’s report — which includes the first ever global map of antibiotic resistance — notes that just 129 of 194 member countries provided any national data on drug resistance (see ‘Spreading scourge’). And only 22 of those had tracked all of the nine bacteria–antibiotic pairs that the agency names as the greatest threats to public health. That list includes S. aureus and methicillin, Escherichia coli and cephalosporins, and Klebsiella pneumoniae and carbapenems. 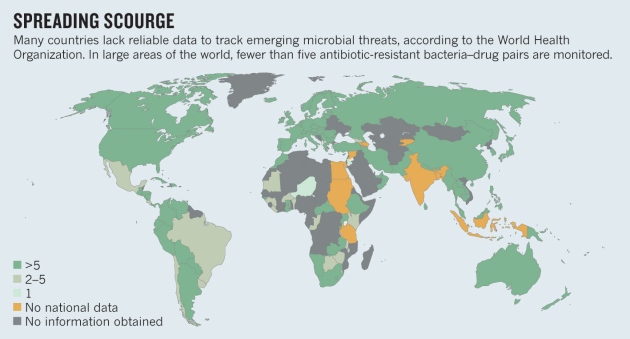 Such problems are compounded by a lack of new antimicrobial drugs in development. This is more than just a problem of future antibiotic supply: pharmaceutical companies’ clinical trials of antibiotics were once a valuable source of resistance data for public-health researchers, says Klugman. “Now that we live in a world where there are very few new antibiotics, there is almost none of that support.”

As a result, researchers do not know what factors have caused resistance to grow so rapidly in developing nations. For instance, it is not clear to what extent the rise of resistance has been spurred by the use of antibiotics for growth promotion in livestock, or by the release of antibiotics into wastewater by drug-manufacturers in countries such as India.

One likely culprit is a lack of sanitation. In many areas, wastewater from hospitals is poorly filtered, allowing the antibiotic-resistant bacteria that flourish there to escape into waterways. If people drink this contaminated water or practise poor hygiene, the bacteria can spread. “If you get increased antimicrobial use but don’t have the infrastructure for infection control, you’re setting yourself up for a tsunami of antibiotic resistance,” says Klugman.

Other problems include overprescribing or unregulated use of antibiotics. In China, for instance, hospitals and clinics receive financial incentives for prescribing, and antibiotics are overused as a result. Some countries allow pharmacies to sell antibiotics without prescription — and people buy them even for diseases that antibiotics cannot treat, such as malaria. “It’s essentially destroying a valuable resource,” says Ramanan Laxminarayan, the director of the Center for Disease Dynamics, Economics & Policy (CDDEP) in Washington DC. Yet insisting that antibiotics be prescribed by physicians in nations where poverty is rife and visits to a doctor are a luxury would mean denying many people drugs that they do need.

Meanwhile, in developed countries, inappropriate prescribing can be a problem if physicians bow to pressure from patients. Training pharmacists and educating the public on correct use of antibiotics could go a long way towards curbing resistance around the world, Laxminarayan says.

Solving these problems will require better monitoring of drug resistance, says Stuart Levy, a physician-scientist at Tufts University in Boston, Massachusetts, who heads the non-profit Alliance for the Prudent Use of Antibiotics. “You can’t just go in and scoop up a sample and get results of resistance and think that’s the country-wide resistance rate,” he says. The WHO report proposes a new global surveillance network, although it is not clear who would pay for it. Levy says that hospitals, non-governmental organizations and local communities could help to track antibiotic usage and test for resistance with inexpensive, readily available screens.

One thing is clear: new types of antibiotic, although sorely needed, cannot offer a solution on their own. They are likely to be expensive and unaffordable in the developing world. More importantly, says Sumanth Gandra, a CDDEP epidemiologist, it is all but inevitable that new drugs will eventually lose their potency, too. “We’ll continue the cycle unless we have new drugs and approach the way we use them differently,” says Gandra.