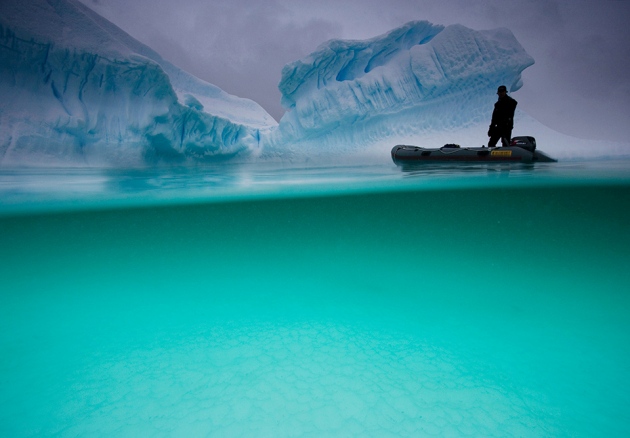 Recent studies suggest that the Antarctic ice sheet is much less stable than scientists once thought.

Choices that the world makes this century could determine the fate of the massive Antarctic ice sheet. A study published online this week in Nature1 finds that continued growth in greenhouse-gas emissions over the next several decades could trigger an unstoppable collapse of Antarctica’s ice — raising sea levels by more than a metre by 2100 and more than 15 metres by 2500.

“That is literally remapping how the planet looks from space,” says study co-author Rob DeConto, a geoscientist at the University of Massachusetts Amherst. The good news, he says, is that it projects little or no sea-level rise from Antarctic melt if greenhouse-gas emissions are reduced quickly enough to limit the average global temperature rise to about 2 °C.

The findings add to a growing body of research that suggests that Antarctic ice is less stable than once thought. In its 2013 report2, the Intergovernmental Panel on Climate Change estimated that Antarctic melting would contribute just a few centimetres to sea-level rise by 2100. But as scientists develop a better understanding of how the ocean and atmosphere affect the ice sheet, their projections of the continent’s future are growing more dire.

DeConto and co-author David Pollard, a palaeoclimatologist at Pennsylvania State University in University Park, developed a climate model that accounts for ice loss caused by warming ocean currents — which can eat at the underside of the ice sheet — and for rising atmospheric temperatures that melt it from above. Ponds of meltwater that form on the ice surface often drain through cracks; this can set off a chain reaction that breaks up ice shelves and causes newly exposed ice cliffs to collapse under their own weight.

They found that by including all of these processes, they could better simulate key geological periods that have long puzzled scientists. Before the last ice age began 130,000–115,000 years ago, for instance, sea levels were 6–9 metres higher than today — yet atmospheric carbon-dioxide levels were about 30% lower. And 3 million years ago, when CO2 levels roughly equalled today’s, the oceans may have been 10–30 metres higher.

Incorporating the physics of ice melt driven by atmospheric warming, along with cliff collapse, helped DeConto and Pollard to reproduce these key periods with their model. “That was sort of an epiphany that maybe we were on to something,” DeConto says. Ultimately, he and Pollard tested how well different versions of their model simulated the past, and then used the ones that performed best to project future sea-level rise. They found that over time, atmospheric warming would become the main driver of ice loss.

“I think their processes are still a bit speculative, but it’s good work,” says Nick Golledge, an ice-sheet modeller at the Victoria University of Wellington in New Zealand. His research, published in Nature in October3, suggests that Antarctic ice melt driven by rising greenhouse-gas emissions could boost global sea levels by up to 39 centimetres by 2100, and by as much as 3 metres by 2300.

Still, Golledge cautions, scientists know little about how the atmosphere and ocean affected ancient glaciers. “We don’t really have a great handle on what the climate was like in the past,” he says.

“That was sort of an epiphany that maybe we were on to something.”

A third Nature study, published in December4, suggested that Antarctic melting was unlikely to produce more than 30 centimetres of sea-level rise by 2100. But its authors noted that newly identified processes such as surface melting and the collapse of ice cliffs could increase ice loss. As such, DeConto and Pollard’s projections “are consistent with our recent study”, says co-author Tamsin Edwards, a physicist at the Open University in Milton Keynes, UK.

Glaciologists are already aware of the destructive power of the atmospheric-warming and cliff-collapse mechanisms that DeConto and Pollard’s model simulates. A string of unusually warm summers caused the sudden collapse of Antarctica’s Larsen B ice shelf in 2002. And scientists have witnessed the basic physics of ice-cliff collapse during calving events on the Jakobshavn and Helheim glaciers in Greenland.

“On the observational side, I see the things they are talking about,” says David Holland, a physical-climate scientist at New York University. “There’s a lot of observation and modelling to go, but they are adjusting people’s thinking in a very scientific way.”

For DeConto, the new model results underscore the choice that humanity is facing. If he and Pollard have the physics correct, this process of ice-shelf disintegration, followed by ice-cliff collapse, will be nearly impossible to stop once it gets under way.

“Once the ocean warms up, that ice will not be able to recover until the oceans cool back down,” he says — a process that could take thousands of years. “It’s a really long-term commitment.”