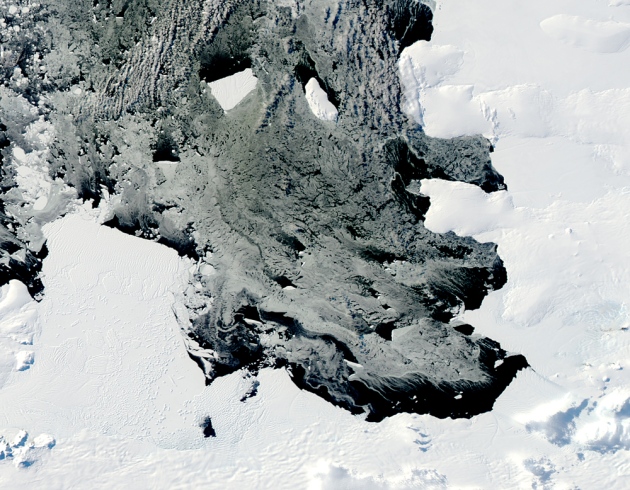 Antarctica's Amundsen Sea region is ground zero for climate scientists worrying about melting ice. This part of western Antarctica is home among others to the Pine Island and Thwaites glaciers, which are some of the fastest-shrinking ice-streams on the continent.

Now, a pair of researchers at the Potsdam Institute for Climate Impact Research in Germany say they have determined that ice loss in the Amundsen Sea region might irrevocably lead to melting of the bigger West Antarctic Ice Sheet. Nature explains the duo's modelling study1, published on 2 November, which forecasts the amount of sea-level rise caused by the melting ice — and explores whether the frozen continent has already crossed a tipping point.

What does the study show?

If ice in the Amundsen Sea has begun to destabilize — as many cryosphere scientists think is the case — then the rest of the West Antarctic Ice Sheet is doomed to follow. That would put global sea levels on course to rise more than 3 metres over the next couple of centuries, or perhaps even millennia.

Study co-authors Johannes Feldmann and Anders Levermann, both climate researchers at the Potsdam Institute, reached this conclusion by using a computer model that calculates physical stresses in different parts of an ice sheet — from ice shelves floating atop ocean waters, to flowing glaciers, to ice held fast by bedrock. When stress levels change in one of these regions — say, if part of an ice shelf collapses into the sea — it affects how ice moves elsewhere. The Parallel Ice Sheet Model simulates these interconnected ice dynamics, assuming that rates of melting stay similar to those of today.

Didn’t we already know that the ice sheet was headed for meltdown?

The latest work is the first to look specifically at how losses in the Amundsen Sea could affect the entire ice sheet in the long term. In other words, it takes the region that most concerns researchers and links it to the future of ice in the continent’s frozen interior.

When will all this happen?

The simulation suggests that if melting continues at current rates, the Amundsen Sea region will be permanently destabilized six decades from now. After that, the interior of the ice sheet would also destabilize, shifting its ice towards the oceans and ultimately adding to global sea-level rise. So another 60 years of melting would be sufficient to kick off potentially millennia of change.

Computer simulations show that ice melting on Antarctica's land can feed sea-ice growth around the continent. Researchers are most concerned about land ice because it is the permanently frozen reservoir that, when it melts, will add to sea-level rise — which floating sea ice does not do.

What should people do about it?

It is not yet clear whether melting in the Amundsen Sea is linked to global warming from greenhouse-gas emissions, or whether natural year-to-year changes are driving it. But “by increasing the temperature of the planet, we increase the risk that the scenario of our paper will unfold”, says Levermann.

Sea-level rise “does not have to be a threat to people”, he adds. “But it will be a threat to things.” Levermann, a long-time advocate of adapting to climate change, says that officials can prepare by developing plans to abandon certain coastal areas or by building up dikes and sea walls.