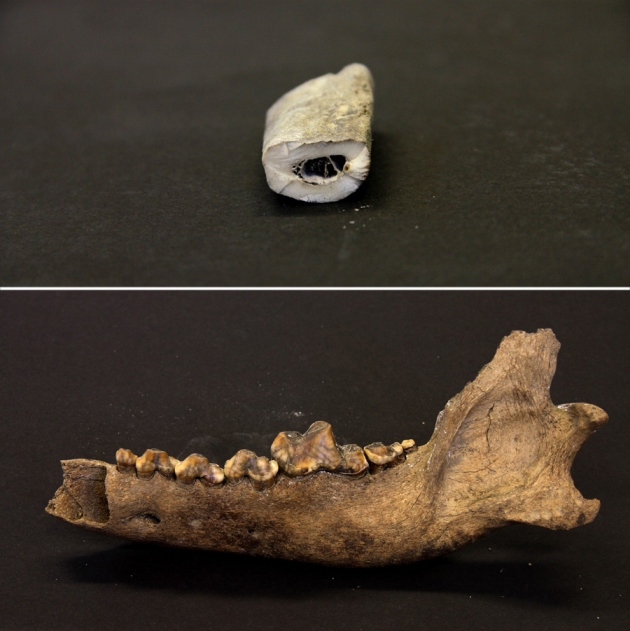 DNA from a small piece of rib bone (pictured, top) from an 35,000-year-old wolf from Taymyr, Siberia, suggests that dogs and wolves may have split 27,000 to 40,000 years ago. A bone from the lower jaw of a slightly older Taymyr wolf, found in the same expedition, is also pictured (bottom).

The genome of an ancient wolf from Siberia is adding weight to evidence that humans domesticated dogs thousands of years earlier than generally thought — perhaps as far back as 40,000 years ago. The first dogs might have been hunting companions for early humans as they settled Europe and Asia during the last Ice Age, researchers suggest.

It has proven hard to pin down exactly when humans domesticated dogs from wolves. Genetic studies of ancient and modern dogs and wolves have placed their domestication at between 10,000 and 30,000 years ago in Europe, China or the Middle East — although the earliest dog-like fossils date back even earlier than this. “We know almost nothing,” says population geneticist Pontus Skoglund of Harvard Medical School in Boston, Massachusetts.

In a paper published on 21 May in Current Biology1, Skoglund's team reports the draft genome sequence of the rib bone of a 35,000-year-old wolf. It suggests that the ancestors of today’s dogs split from the ancestors of modern wolves 27,000 to 40,000 years ago — earlier than previously suggested.

The researchers found the rib bone on a six-week expedition to Russia's Taymyr Peninsula in 2010, the northernmost part of mainland Eurasia. They combed riverbanks by boat to find spots where the permafrost had eroded away to reveal the remains of long-dead animals, such as woolly mammoths. The rib, like other bones discovered during the expedition, was difficult to identify. “I had written on the bag ‘reindeer?’,” says Love Dalén, an evolutionary geneticist at the Swedish Museum of Natural History in Stockholm, who was on the expedition and co-led the study.

After initial sequencing branded the rib as a wolf’s, and radiocarbon dating indicated that the animal died around 35,000 years ago, Dalén assumed that the wolf had lived long before humans domesticated the animals. But the rib's genome indicates that the wolf seems to share roughly equal ancestry with both modern-day domestic dogs and wolves, suggesting that it lived around the time that the ancestors of today’s dogs split from the ancestors of modern wolves.

It is probable that the earliest domesticated canines looked quite different to those we know today, Dalén says. “I think it’s quite possible that wolves were held captive, then they were domesticated — but kept looking like wolves for many, many thousands of years”.

Evolutionary geneticist Laurent Frantz, at the University of Oxford, UK, is not convinced that domestication occurred around the time that dogs' ancestors split from wolves. An evolutionary split could have led to multiple branches of wolves, he points out, one of which only later led to domesticated dogs.

But Robert Wayne, an evolutionary geneticist at the University of California, Los Angeles, says that it is possible that ancient humans domesticated dogs while colonizing Europe and Asia 40,000 years ago — which is long before humans domesticated other animals such as pigs, cattle and chicken. His team has calculated domestication dates of 20,000 to 30,000 years ago from limited stretches of ancient dog and wolf DNA.

Even after their split, dogs and wolves occasionally interbred. Greenland dogs and Siberian huskies, the team found, carry extra wolf ancestry compared to other breeds. Frantz wonders whether humans intentionally bred the ancestors of huskies and other Arctic dogs with wolves, and whether the dogs' wolf ancestry may have helped them adapt to the region's climate. “It’s really good to see these kinds of papers that allow us to ask new questions about domestication,” he says.

Dalén and other researchers suggest that early dogs aided Ice Age hunters. One provocative speculation in the book The Invaders (Harvard University Press, 2015), by Pat Shipman, an anthropologist at Pennsylvania State University in University Park, argues that dogs helped early humans to out-compete Neanderthals, leading to their extinction.

“There’s something there we don’t quite understand yet,” Wayne says. “Dogs were fundamentally important to humans in a way that other animals weren’t.”