The original colours of a fossilized moth have been brought back to life for the first time. Scientists have concluded that the 47-million-year-old insects once had a yellow-green sheen that warned predators of their foul taste and toxicity when they were exposed during feeding, and provided camouflage when they were resting.

Some of the brightest colours in nature come not from chemical pigments but from tiny grooves, layers or other structural patterns in body parts such as feathers or scales, that reflect light to produce different iridescent hues. Many animals — notably birds, butterflies and moths — use these 'structural colours' to communicate warnings to predators and to signal their fitness to potential mates, says Maria McNamara, a palaeobiologist at Yale University in New Haven, Connecticut. 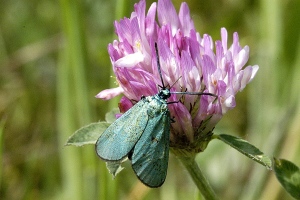 Scientists have reconstructed the original colouring of a 47-million-year-old relative of this forester moth (see fossil moth slideshow).

McNamara and her colleagues analysed fossils of moths preserved in the Messel oil shale of west central Germany — fossils whose tiny wing scales still show a hint of metallic gleam. The pattern of veins in the insects’ wings suggests that the moths’ closest living relatives are forester moths, a group of typically day-flying species that feed on flower nectar, says McNamara.

Most modern forester moths, which live in tropical and temperate areas of Eurasia and Australia, have a metallic sheen to their wings and all of them can produce hydrogen cyanide, a toxic and distasteful chemical.

Because the colour of the moths depends on the chemical composition of the wing scales as well as scale microstructure, the fossils don’t retain their original colour. So the researchers used a combination of electron microscopy and mathematical techniques to reconstruct what colour the moths would have been when alive.

The uppermost layer of each wing scale is 93–124 nanometres thick, with the layers below becoming progressively thinner. The downwardly curved portions of the scales — which together look like a miniature version of a Spanish tiled roof — are separated by 1-micrometre-tall ridges, spaced 1.8–2.5 μm apart. “The level of detail preserved in the scales of the fossil moths is just spectacular,” notes McNamara.

Results of the analyses, published online today in PLoS Biology1, suggest that much of the moths’ forewings — the set of wings visible when moths are at rest — were a bright yellow-green, with a fringe of blue and brown around the edges ( see fossil moth slideshow ).

The researchers suggest that, as in the insects’ modern-day relatives, the greenish colouring was intended to blend in with leaves when the moths were resting, but to serve as a warning signal when they were feeding on flowers, and therefore exposed.

Several features of the individual scales, including the scalloping and many perforations in their layers, help to suppress their iridescence. The researchers think that this ensured the moths’ warning signal could be seen by predators from a wide range of angles.

Reconstructing the colours of the ancient moths provides important insights into their behaviour, the researchers contend. For instance, says McNamara, the yellow-green sheen suggests that, even millions of years ago, some butterflies and moths had developed not only a strategy of camouflage that enabled them to 'hide in plain sight', but also the ability to produce foul-tasting chemicals.

“This is a remarkably thorough and innovative piece of work,” says Michael Benton, a palaeontologist at the University of Bristol, UK. He notes that the researchers were especially careful in demonstrating that the presumed colours were original to the moths and not affected by changes in scale structure that might have occurred during fossilization.

The team’s analysis “is a real advance”, agrees Helen Ghiradella, a morphologist at the University at Albany, State University of New York. The technique could now be applied to reconstruct the original colours of other fossils too, she says. “They’ve handed palaeontologists a new way to look at ancient insects.”