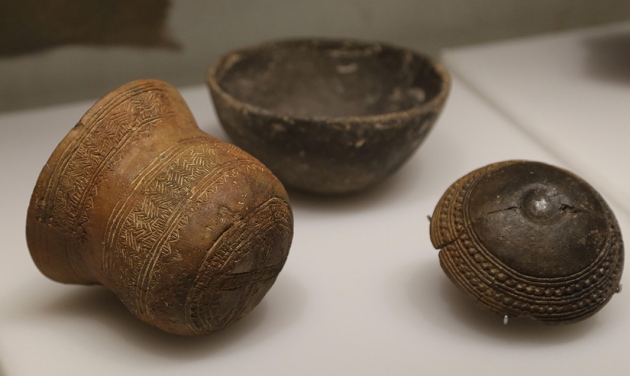 Bell-shaped pottery from Segovia, Spain, that is characteristic of the Bronze Age ‘Bell Beaker’ culture.

Around 4,500 years ago, a mysterious craze for bell-shaped pottery swept across prehistoric Europe. Archaeologists have debated the significance of the pots — artefacts that define the ‘Bell Beaker’ culture — for more than a century. Some argue that they were the Bronze Age’s hottest fashion, shared across different groups of people. But others see them as evidence for an immense migration of ‘Beaker folk’ across the continent.

Now, one of the biggest ever ancient-genome studies suggests both ideas are true. The study, posted on bioRxiv on 9 May1, analysed the genomes of 170 ancient Europeans and compared them to hundreds of other ancient and modern genomes. In Iberia and central Europe, skeletons found near Bell Beaker artefacts share few genetic ties — suggesting that they were not one migrating population. But in Britain, individuals connected to Beaker pots seem to be a distinct, genetically related group that almost wholly replaced the island’s earlier inhabitants (see ‘Bell Beaker fashion’).

If true, this suggests that Britain’s Neolithic farmers (who left behind massive rock relics, including Stonehenge) were elbowed out by Beaker invaders. “To me, that’s definitely surprising,” says Pontus Skoglund, a population geneticist at Harvard Medical School in Boston, Massachusetts, who was not involved in the research. “The people who built Stonehenge probably didn’t contribute any ancestry to later people, or if they did, it was very little.”

Some archaeologists say that the study does not prove the scale of the British Beaker invasion, but agree that it is a major work that typifies how huge ancient-DNA studies are disrupting archaeology. It’s “groundbreaking”, says Benjamin Roberts, an archaeologist at Durham University, UK.

The variety of Beaker artefacts makes it hard to define them as emerging from one distinctive culture: many researchers prefer to call their spread the ‘Bell Beaker phenomenon’, says Marc Vander Linden, an archaeologist at University College London. The distinctive pots, possibly used as drinking vessels, are nearly ubiquitous; flint arrowheads, copper daggers and stone wrist guards are common, too. But there are regional differences in ceramics and burial style. And the immense, yet discontinuous, geographical range of Beaker sites — from Scandinavia to Morocco, and Ireland to Hungary — has sown more confusion. After a few hundred years, the pots vanish from the record. 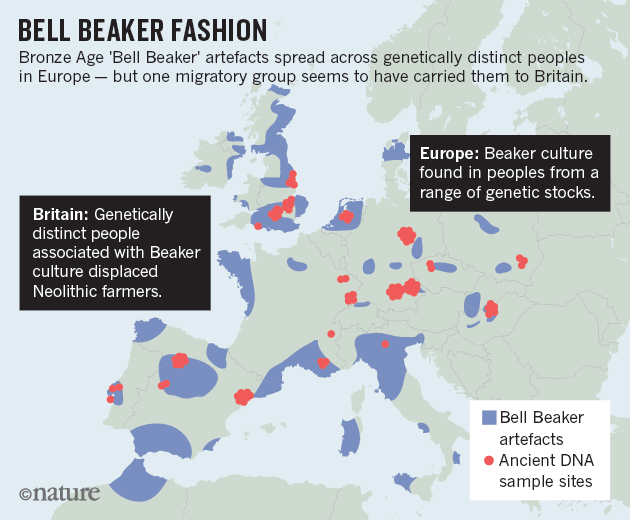 The latest work, led by geneticists Iñigo Olalde and David Reich at Harvard Medical School, involved 103 researchers at dozens of institutions, including Bronze Age archaeologists. Reich’s team analysed more than 1 million DNA variants across the genomes of individuals who lived in Europe between 4700 and 1200 bc. The team declined to comment because the paper has not yet been published in a peer-reviewed journal.

The analysis seems to dispel the idea of one ‘Beaker people’ arising from a specific source. Individuals in Iberia (which has been proposed as the wellspring for the culture) shared little ancestry with those in central Europe. Even Beaker-associated people in the same region came from different genetic stock. That pattern contrasts with earlier upheavals in Europe driven by mass migrations, says Skoglund. Bell Beaker “is the best example of something that is pots and not people” that are spreading, he says.

But in Britain, the arrival of Bell Beaker pots coincided with a shift in the island’s genetics. Reich’s team analysed the genomes of 19 Beaker individuals across Britain and found that they shared little similarity with those of 35 Neolithic farmers there. The pot-makers were more closely related to 14 individuals from the Netherlands, and had lighter-coloured skin and eyes than the people they replaced. By 2000 bc, signals of Neolithic ancestry disappear from ancient genomes in Britain, Reich’s team find — largely replaced by Beaker-associated DNA. Such turnover is “pretty striking”, says Garrett Hellenthal, a statistical geneticist at University College London who has studied the peopling of the island through the genomes of living Brits. More data could reveal surprises, but the team makes a good case that Beaker folk replaced the region’s early farmers, he says.

Reich’s team calculates that Britain saw a  greater than 90% shift in its genetic make-up. But Roberts says he doesn’t see evidence for such a huge shift in the archaeological record. The rise of cremation in Bronze Age Britain could have biased the finding, he cautions, because it might have eliminated bones that could have been sampled for DNA. Although archaeologists are excited to see ancient DNA yield breakthroughs in problems that have vexed their field for decades, says Linden, he expects some push back against the latest study’s conclusions. “It’s not at all the end of the story.”