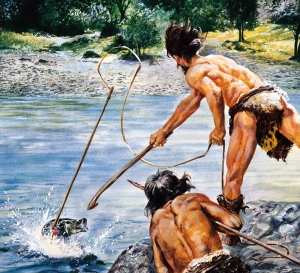 Europe was inhabited by hunter-gatherers before migrations from the Middle East brought agriculture to the continent.

Newly released genome sequences from almost a dozen early human inhabitants of Europe suggest that the continent was once a melting pot in which brown-eyed farmers encountered blue-eyed hunter-gatherers.

Present-day Europeans, the latest work shows, trace their ancestry to three groups in various combinations: hunter-gatherers, some of them blue-eyed, who arrived from Africa more than 40,000 years ago; Middle Eastern farmers who migrated west much more recently; and a novel, more mysterious population whose range probably spanned northern Europe and Siberia.

That conclusion comes from the genomes of 8,000-year-old hunter-gatherers — one man from Luxembourg and seven individuals from Sweden — as well as the genome of a 7,500-year-old woman from Germany. The analysis, led by Johannes Krause of the University of Tübingen, Germany, and David Reich of Harvard Medical School in Boston, Massachusetts, was posted on the biology preprint website bioRxiv.org on 23 December 20131. The results have not yet been published in a peer-reviewed journal.

A second team, led by Carles Lalueza-Fox at the University Pompea Fabra in Barcelona, Spain, will soon publish the genome of a 7,000-year-old hunter-gatherer from northwest Spain, the palaeogenomicist said at a recent talk. In 2012, his team released preliminary genomic data from the same sample, suggesting that this hunter-gatherer bore little relationship to modern Spaniards2. The two papers describe what are thought to be the oldest human genomes from Europe found so far.

The new studies sketch a portrait of early Europeans based on variations in DNA that are known to be linked to traits in modern humans.

The authors' gene sequencing suggests that the individuals from Luxembourg and Spain, although dark-skinned, probably had blue eyes and belonged to groups known to be hunter-gatherers. The German woman, meanwhile, had brown eyes and lighter skin, and was related to Middle Eastern groups known to have developed farming. However, both the Luxembourg hunter-gatherer and the German farmer had multiple copies of a gene that breaks down starches in saliva, a feature that has been proposed to be an adaptation to the grain-laden diets characteristic of agricultural life. On the other hand, neither of them had the ability to digest the sugar lactose, found in milk, a trait that emerged in the Middle East after the domestication of cattle and that later spread to Europe.

The work also adds a few twists to the prehistory of Europe. Previous archaeological and genetic studies suggested that most of today’s Europeans are descended from Middle Eastern farmers who interbred with local hunter-gatherers in some regions and displaced these early residents in others. Krause’s team concludes that a third population contributed to the gene pool of contemporary Europeans.

This group, which the authors call ancient northern Eurasians, may have lived at high latitudes between Europe and Siberia until a few thousand years ago. Traces of this population were also detected in the genome of a 24,000 year-old Siberian child. Published online last month, the boy’s genome suggests that northern Eurasians interbred with the ancestors of Native Americans as well as with Europeans3.

A comparison of the new data with genetic sequencing of present-day individuals shows that the current residents of various European countries are composites of these three groups. Scots and Estonians, for instance, have more northern Eurasian ancestry than any other modern European population sampled, whereas Sardinians are more closely related to Eastern farmers than are other Europeans.

The new European ancient genomes also hint at early human forays out of Africa. Middle Eastern farmers, Krause’s team discovered, split off from African ancestors earlier than did European and Asian groups. One possible explanation for this pattern is that the farmers are descended from humans who inhabited 100,000–120,000-year-old settlements in Israel and the Arabian Peninsula.

Many researchers assumed that these sites represented failed migrations out of Africa, because other evidence suggested that humans left Africa less than 100,000 years ago.

“I don’t think anybody saw that coming,” says Eske Willerslev, a palaeogeneticist at the University of Copenhagen. But he says that the population’s existence will be tough to prove conclusively. “It’s super interesting — if it’s correct,” Willerlsev adds.

“What would be really nice is to find some individual that is a direct observation of this population,” says Pontus Skogland, an evolutionary geneticist at Uppsala University in Sweden. Ancient DNA does not last long in hot climates, and so finding DNA from this population in the Middle East may require technological advances, as well as a bit of luck.

Lalueza-Fox declined to discuss his team’s work, but he cautions against making too many assumptions about the peopling of Europe using just a handful of ancient genomes from a single time period. “It’s going to be lots of different migrations and movements,” he says. “There’s going to be plenty of room for investigation in the next few years.”