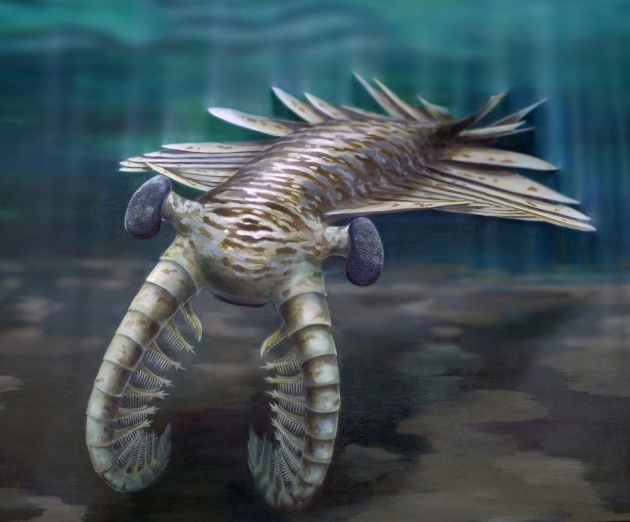 Armed with barbed grasping claws and a mouth full of tooth-like serrations, anomalocaridids are thought to have been the top predators in the Cambrian oceans about 500 million years ago. A cache of spectacular fossils now suggests that the ancient hunter Anomalocaris had compound eyes that gave it keener vision than many of the modern arthropods related to it.

Previous fossils have raised the possibility that it had compound eyes, but none of them has had enough surface detail to confirm this. Palaeontologist John Paterson at the University of New England in Australia, and his colleagues have now done so by studying fossils discovered in the Emu Bay Shale in South Australia. They found that thousands of tiny hardened lenses definitely made up each eye, much as they make up the eyes of modern insects and crustaceans. The fossil is described today in Nature1.

“The extraordinary detail preserved in this specimen is just fantastic,” says Robert Gaines, palaeobiologist at Pomona College in Claremont, California, who was not involved in the study.

“It has been unbelievably frustrating being able to see eyes like these at fossil sites like the Burgess Shale [in the Canadian Rocky Mountains], but not have any details. It is really refreshing to have our ideas about these animals confirmed at last,” comments Simon Conway Morris, a palaeontologist at the University of Cambridge, UK.

Moreover, it seems that the eyes of ancient anomalocaridids had even more lenses than those of most modern arthropods. Paterson and his team counted about 16,000 lenses on each eye. “This is a lot,” says Paterson. “The common housefly has only 3,200 and most ants have fewer than 1,000.” Dragonflies have up to 28,000 lenses in each eye — and extraordinary eyesight — but they are “the freaks of the arthropods”, he says.

“Such lens-rich compound eyes suggest Anomalocaris was a highly visual hunter. Its prey didn’t stand a chance,” says Paterson. Conway Morris says that it is reasonable to speculate that the creatures had a high degree of visual acuity, and a well-developed brain to process that information.

One of the stalked eyes of Anomalocaris from South Australia with arrows pointing to the boundary between the stalk and visual surface, plus the intricate lenses preserved (inset).

It is possible that the eyes of Anomalocaris had even more than 16,000 lenses — the fossils are detailed, but they are not perfect. In fossil form, the stalked eyes are flattened, like pancakes. But Paterson speculates that the eyes of a living anomalocaridid would have been bulbous, and that if non-flattened eyes were to be found, many more lenses would be discovered on the other side.

Yet the research raises questions about more than just how well Anomalocaris could see. Because compound eyes are so commonly found in animals with exoskeletons, it has been assumed that the two traits evolved together. Yet anomalocaridids were soft-bodied, which Paterson suggests could mean that compound eyes evolved first.

“Since these compound eyes themselves are biomineralized, it is not clear to me whether the ancestors of Anomalocaris had a mineralized exoskeleton and lost it early on or if they simply hadn’t evolved them yet. This could stir up debate,” says Gaines.