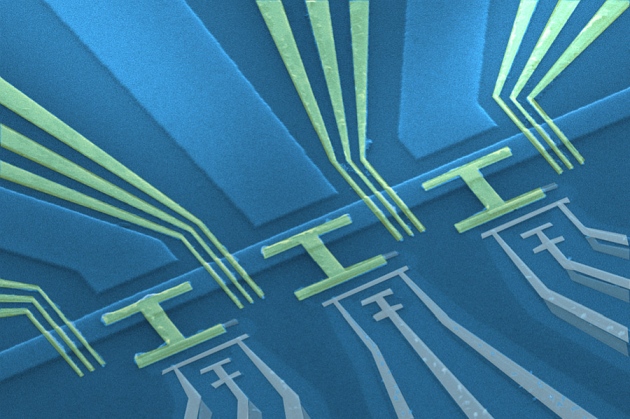 A semiconductor device, seen in a scanning electron micrograph, can measure the flow of single electrons.

Physicists have tracked electrons crossing a semiconductor chip one at a time — an experiment that should at last enable a rational definition of the ampere, the unit of electrical current.

At present, an ampere is defined as the amount of charge flowing per second through two infinitely long wires one metre apart, such that the wires attract each other with a force of 2 × 10−7 newtons per metre of length. That definition, adopted in 1948 and based on a thought experiment that can at best be approximated in the laboratory, is clumsy — almost as much of an embarrassment as the definition of the kilogram, which relies on the fluctuating mass of a 125-year-old platinum-and-iridium cylinder stored at the International Bureau of Weights and Measures (BIPM) in Paris.

The new approach, described in a paper1 posted onto the arXiv server on 19 December, would redefine the amp on the basis of e, a physical constant representing the charge of an electron. Metrologists have long sought such a rational definition. “It’s an enormously challenging thing to try and do and it’s quite an important paper,” says Stephen Giblin, a physicist at the National Physical Laboratory in Teddington, UK.

The result will find favour at a meeting of the BIPM’s General Conference on Weights and Measures in November. There, metrologists will discuss a proposal to redefine the ampere, the kilogram and two other standard (SI) units — the mole and the kelvin — in terms of the physical constants e, Planck’s constant, Avogadro’s constant and Boltzmann’s constant. 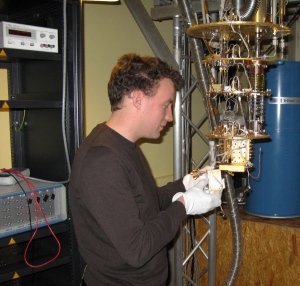 A researcher at PTB in Braunschweig, Germany, installs a semiconductor chip containing a single-electron pump that could help to redefine the ampere.

Two other basic SI units, the metre and the second, have already been redefined in terms of two constants: the speed of light and the frequency at which electrons in caesium atoms transition between energy levels.

In the amp experiment1, physicist Hans Schumacher of the Federal Institute of Physical and Technical Affairs (PTB) in Braunschweig, Germany, and his colleagues made use of a single-electron pump, a device in which voltage pulses prompt electrons to quantum-mechanically tunnel across barriers one at a time. The researchers tracked the paths of individual electrons by detecting changes in the electrical charge stored at points between the barriers. Primitive electron pumps have existed since 1990, but this is the first time that changes in charge have been detected for each hop of an electron.

The pump transferred just a few dozen electrons per second — slow enough to permit precision measurement and thus to provide proof of principle for redefining the amp. But this is only a first step: the set-up would not be practical for calibrating current-measuring ammeters, which need to run at higher currents. The ultimate goal is to create a ‘mise en pratique’ — a standard-setting experiment that can be reproduced in any lab to calibrate measurements of current precisely — so the race is now on to combine Schumacher’s validation method with a higher-current pump.

“It’s impossible to say which is the winning concept.”

In 2012, Giblin pioneered a semiconductor single-electron pump that transferred nearly one billion electrons per second (ref. 2), but he could not track them one by one. Other types of pump include turnstiles, in which electrons tunnel between superconducting wires, and tunnel junctions, in which electrons tunnel between aluminium islands separated by layers of insulating oxide. But these must also be operated at relatively low currents to track single electrons. “It’s impossible to say which is the winning concept,” says Jukka Pekola, a physicist at Aalto University in Espoo, Finland, who reviewed approaches to redefining the amp in 2013 (ref. 3).

Still, the amp is in good shape for the November meeting, as is the kelvin. The charge of the electron and Boltzmann’s constant have both been measured precisely, so both units are ready to be redefined today, says François Piquemal, a physicist at the National Laboratory of Metrology and Testing in Paris.

But the process could be delayed until the 2018 meeting of the BIPM general conference. All four units are intertwined, so the plan is to redefine them all at once, and the kilogram is causing problems. There are two rival approaches to its redefinition: a watt balance, which would balance a test mass against Earth’s gravity in terms of electrical power, and a precise count of atoms in a sphere of silicon. The two approaches give slightly different answers. Piquemal says that the differing approaches need to be reconciled before the units can be redefined.