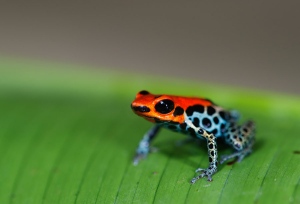 Danger sign: species such as the endemic red-backed poison dart frog could be at greater threat from Amazonian deforestation than thought.

The vast majority of species extinctions in the Brazilian Amazon are yet to come, predicts a paper published in Science today1.

Deforestation has declined to record lows in recent years, and just over 50% of Brazil’s rainforest now falls under some form of protected status. But the effects of habitat loss take time to manifest. “Cutting down trees doesn’t kill a bird directly. It takes a lot of time for those birds to actually die. They’re all crammed into the habitat that’s left. Then gradually you’ll have this increased mortality,” says Robert Ewers, an ecologist at Imperial College London and the study's leader.

Previous models of how deforestation affects biodiversity have assumed that deforestation happens in one swoop. But that’s not how it works. Deforestation tends to occur in fits and spurts, and as it continues, the number of species headed for extinction — the 'extinction debt' — rises.

“If you cut down a patch of habitat and, before the effects are felt, you cut down more habitat, you’ve got some outstanding debt,” explains Daniel Reuman, a mathematician at Imperial College, who also worked on the project. “We wanted to figure out how it happens with multiple instances over time instead of just one instance. It’s an amazingly simple model extension that has big implications.”

So, Ewers, Reuman and their colleague Oliver Wearn came up with a formula that relates species extinction to the timing and amount of habitat loss. “It sorts out the bookkeeping of all these different deforestation events and extinction debts,” explains Reuman. When they plugged individual species data for vertebrates that depend on the tropical forest for food and shelter and deforestation patterns from 1970 to 2008 into their model, it projected that 80–90% of extinctions caused by previous rainforest loss are yet to come. Brazil still owes the grim reaper an average of two mammals, five birds and one amphibian per 2500 square kilometres.

Next, the team ran four scenarios that look 40 years into the future: 'business as usual', or little regulation; 'governance', or some regulation; 'strong', or reducing deforestation by 80% by 2020, in accordance with the Brazilian government’s goal; and 'end of deforestation' by 2020. Under the most likely scenario — governance — local ecosystems could lose an average of 12 species and condemn 19 more to extinction. In the worst-case scenario, local species are close to eliminated.

Britaldo Silveira Soares Filho, a cartographer at the Federal University of Minas Gerais in Brazil, sees models such as this as useful planning tools. But no model is perfect, he says. “Although the paper touches on the steep decline in Amazon deforestation rates that took place in recent years, it disregards two major factors,” says Soares Filho. “First, 50% of Amazon forest is now protected; and second, increased green governance in Brazil makes those predictions quite unlikely.” To Soares Filho, Brazil's Forest Code, which was updated earlier this year amid controversy (see 'Brazilian president vetoes parts — but not all — of controversial forestry bill'), is the Amazon's best chance to preserve biodiversity.

Ewers stresses that although the findings seem bleak, they do provide a window of opportunity. “I’d like to think that people could look at the data and say, we know now exactly where you have the highest extinction debt and we can target those particular areas and conserve the species that are still there.”