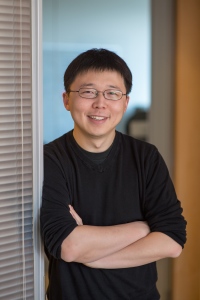 Synthetic biologist Feng Zhang is convinced that genome editing can still be made more efficient.

The CRISPR/Cas9 technique is revolutionizing genetic research: scientists have already used it to engineer crops, livestock and even human embryos, and it may one day yield new ways to treat disease.

But now one of the technique's pioneers thinks that he has found a way to make CRISPR even simpler and more precise. In a paper published in Cell on 25 September, a team led by synthetic biologist Feng Zhang of the Broad Institute in Cambridge, Massachusetts, reports the discovery of a protein1 called Cpf1 that may overcome one of CRISPR/Cas9’s few limitations; although the system works well for disabling genes, it is often difficult to truly edit them by replacing one DNA sequence with another.

The CRISPR/Cas9 system evolved as a way for bacteria and archaea to defend themselves against invading viruses. It is found in a wide range of these organisms, and uses an enzyme called Cas9 to cut DNA at a site specified by 'guide' strands of RNA. Researchers have turned CRISPR/Cas9 into a molecular-biology powerhouse that can be used in other organisms. The cuts made by the enzyme are repaired by the cell’s natural DNA-repair processes.

CRISPR is much simpler than previous gene-editing methods, but Zhang thought there was still room for improvement.

So he and his colleagues searched the bacterial kingdom to find an alternative to the Cas9 enzyme commonly used in laboratories. In April, they reported that they had discovered a smaller version of Cas9 in the bacterium Staphylococcus aureus2. The small size makes the enzyme easier to shuttle into mature cells — a crucial destination for some potential therapies.

The team was also intrigued by Cpf1, a protein that looks very different from Cas9, but is present in some bacteria with CRISPR. The scientists evaluated Cpf1 enzymes from 16 different bacteria, eventually finding two that could cut human DNA.

They also uncovered some curious differences between how Cpf1 and Cas9 work. Cas9 requires two RNA molecules to cut DNA; Cpf1 needs only one. The proteins also cut DNA at different places, offering researchers more options when selecting a site to edit. “This opens up a lot of possibilities for all the things we could not target before,” says epigeneticist Luca Magnani of Imperial College London.

Cpf1 also cuts DNA in a different way. Cas9 cuts both strands in a DNA molecule at the same position, leaving behind what molecular biologists call ‘blunt’ ends. But Cpf1 leaves one strand longer than the other, creating a 'sticky' end. Blunt ends are not as easy to work with: a DNA sequence could be inserted in either end, for example, whereas a sticky end will only pair with a complementary sticky end.

“The sticky ends carry information that can direct the insertion of the DNA,” says Zhang. “It makes the insertion much more controllable.”

Zhang’s team is now working to use these sticky ends to improve the frequency with which researchers can replace a natural DNA sequence. Cuts left by Cas9 tend to be repaired by sticking the two ends back together, in a relatively sloppy repair process that can leave errors. Although it is possible that the cell will instead insert a designated, new sequence at that site, that kind of repair occurs at a much lower frequency. Zhang hopes that the unique properties of how Cpf1 cuts may be harnessed to make such insertions more frequent.

For Bing Yang, a plant biologist at the Iowa State University in Ames, this is the most exciting aspect of Cpf1. “Boosting the efficiency would be a big step for plant science,” he says. “Right now, it is a major challenge.”

Will the new enzyme surpass Cas9 in popularity? “It’s too early to tell,” says Zhang. “It certainly has some distinct advantages.” The CRISPR/Cas9 system is so popular — and potentially lucrative — that it has sparked a fierce patent fight between the University of California, Berkeley, and the Broad Institute and its ally, the Massachusetts Institute of Technology in Cambridge. Zhang says that his lab will make the CRISPR/Cpf1 components available to academic researchers, as it has done with its CRISPR/Cas9 tools.

For now, the results stand as a testament that researchers still have more to learn from the genome-editing systems that bacteria have evolved. “This study powerfully demonstrates that the natural evolutionary diversity of CRISPR systems is rich with potential solutions to the challenges facing the use of genome-editing agents,” says David Liu, a chemical biologist at Harvard University in Cambridge. (Zhang and Liu are both scientific advisers to Editas Medicine, a company in Cambridge that aims to develop CRISPR-based therapies.)

Microbiologist John van der Oost of Wageningen University in the Netherlands, who collaborated on the latest study with Zhang, plans to keep searching for new methods. “You never know whether one of these systems will be suitable for genome editing,” he says. “There are still surprises ahead of us.”