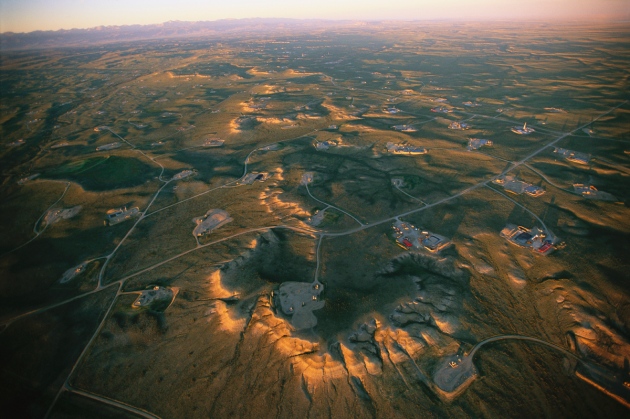 Natural-gas operations in areas such as Wyoming’s Jonah Field could release far more methane into the atmosphere than previously thought.

When US government scientists began sampling the air from a tower north of Denver, Colorado, they expected urban smog — but not strong whiffs of what looked like natural gas. They eventually linked the mysterious pollution to a nearby natural-gas field, and their investigation has now produced the first hard evidence that the cleanest-burning fossil fuel might not be much better than coal when it comes to climate change.

Led by researchers at the National Oceanic and Atmospheric Administration (NOAA) and the University of Colorado, Boulder, the study estimates that natural-gas producers in an area known as the Denver-Julesburg Basin are losing about 4% of their gas to the atmosphere — not including additional losses in the pipeline and distribution system. This is more than double the official inventory, but roughly in line with estimates made in 2011 that have been challenged by industry. And because methane is some 25 times more efficient than carbon dioxide at trapping heat in the atmosphere, releases of that magnitude could effectively offset the environmental edge that natural gas is said to enjoy over other fossil fuels.

“If we want natural gas to be the cleanest fossil fuel source, methane emissions have to be reduced,” says Gabrielle Pétron, an atmospheric scientist at NOAA and at the University of Colorado in Boulder, and first author on the study, currently in press at the Journal of Geophysical Research. Emissions will vary depending on the site, but Pétron sees no reason to think that this particular basin is unique. “I think we seriously need to look at natural-gas operations on the national scale.”

The results come as a natural-gas boom hits the United States, driven by a technology known as hydraulic fracturing, or ‘fracking’, that can crack open hard shale formations and release the natural gas trapped inside. Environmentalists are worried about effects such as water pollution, but the US government is enthusiastic about fracking. In his State of the Union address last week, US President Barack Obama touted natural gas as the key to boosting domestic energy production.

Natural gas emits about half as much carbon dioxide as coal per unit of energy when burned, but separate teams at Cornell University in Ithaca, New York, and at the US Environmental Protection Agency (EPA) concluded last year that methane emissions from shale gas are much larger than previously thought. The industry and some academics branded those findings as exaggerated, but the debate has been marked by a scarcity of hard data.

“A big part of it is just raw gas that is leaking from the infrastructure.”

“It’s great to get some actual numbers from the field,” says Robert Howarth, a Cornell researcher whose team raised concerns about methane emissions from shale-gas drilling in a pair of papers, one published in April last year and another last month (R. W. Howarth et al. Clim. Change Lett. 106, 679–690; 2011; R. W. Howarth et al. Clim. Change in the press). “I’m not looking for vindication here, but [the NOAA] numbers are coming in very close to ours, maybe a little higher,” he says.

Natural gas might still have an advantage over coal when burned to create electricity, because gas-fired power plants tend to be newer and far more efficient than older facilities that provide the bulk of the country’s coal-fired generation. But only 30% of US gas is used to produce electricity, Howarth says, with much of the rest being used for heating, for which there is no such advantage.

The first clues appeared in 2007, when NOAA researchers noticed occasional plumes of pollutants including methane, butane and propane in air samples taken from a 300-metre-high atmospheric monitoring tower north of Denver. The NOAA researchers worked out the general direction that the pollution was coming from by monitoring winds, and in 2008, the team took advantage of new equipment and drove around the region, sampling the air in real time. Their readings led them to the Denver-Julesburg Basin, where more than 20,000 oil and gas wells have been drilled during the past four decades.

Most of the wells in the basin are drilled into ‘tight sand’ formations that require the same fracking technology being used in shale formations. This process involves injecting a slurry of water, chemicals and sand into wells at high pressure to fracture the rock and create veins that can carry trapped gas to the well. Afterwards, companies need to pump out the fracking fluids, releasing bubbles of dissolved gas as well as burps of early gas production. Companies typically vent these early gases into the atmosphere for up to a month or more until the well hits its full stride, at which point it is hooked up to a pipeline.

The team analysed the ratios of various pollutants in the air samples and then tied that chemical fingerprint back to emissions from gas-storage tanks built to hold liquid petroleum gases before shipment. In doing so, they were able to work out the local emissions that would be necessary to explain the concentrations that they were seeing in the atmosphere (see ‘A losing battle’). Some of the emissions come from the storage tanks, says Pétron, “but a big part of it is just raw gas that is leaking from the infrastructure”. Their range of 2.3–7.7% loss, with a best guess of 4%, is slightly higher than Corn­ell’s estimate of 2.2–3.8% for shale-gas drilling and production. It is also higher than calculations by the EPA, which revised its methodology last year and roughly doubled the official US inventory of emissions from the natural-gas industry over the past decade. Howarth says the EPA methodology translates to a 2.8% loss.

The Cornell group had estimated that 1.9% of the gas produced over the lifetime of a typical shale-gas well escapes through fracking and well completion alone. NOAA’s study doesn’t differentiate between gas from fracking and leaks from any other point in the production process, but Pétron says that fracking clearly contributes to some of the gas her team measured.

Capturing and storing gases that are being vented during the fracking process is feasible, but industry says that these measures are too costly to adopt. An EPA rule that is due out as early as April would promote such changes by regulating emissions from the gas fields.

Officials with America’s Natural Gas Alliance, based in Washington DC, say that the study is difficult to evaluate based on a preliminary review, but in a statement to Nature they add that “the findings raise questions and warrant a closer examination by the scientific community”. Environmental groups are pushing the EPA to strengthen pollution controls in the pending rule, but industry is pushing to relax many of the requirements. Many companies are already improving their practices and reducing emissions throughout the country, either voluntarily or by regulation, the alliance says.

Not all studies support the higher methane numbers. Sergey Paltsev, assistant director for economic research at the Massachusetts Institute of Technology Energy Initiative in Cambridge, and his colleagues are gathering information about industry practices for a study on shale-gas emissions. He says that their figures are likely to come in well below even the lower EPA estimate. He calls the NOAA results “surprising” and questions how representative the site is.

Pétron says that more studies are needed using industry inventories and measurements of atmospheric concentrations. “We will never get the same numbers,” she says, “but if we can get close enough that our ranges overlap in a meaningful way, then we can say we understand the process.”