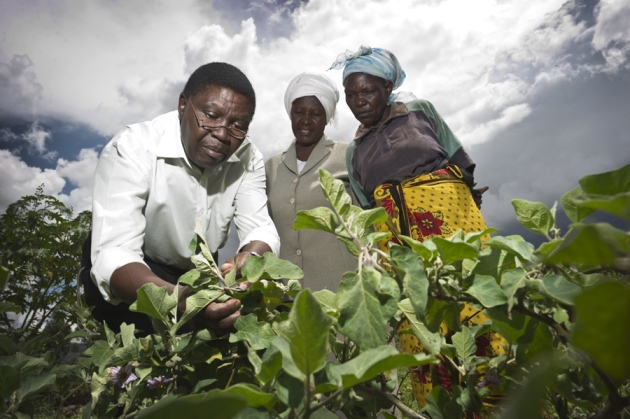 Crop research is one of several sectors set to benefit from a proposed African science strategy.

Scientists have raised concerns about a ten‑year pan-African science and innovation strategy that heads of state are expected to adopt this week.

The Science, Technology and Innovation Strategy for Africa (STISA), proposed by the African Union (AU) continental grouping, aims to prioritize the use of research to drive economic and social development across the continent. It will commit signatory countries to six goals, including tackling hunger, disease and unemployment, and will set up structures that give research and development organizations leverage to pursue them.

But critics fear that the strategy’s top-heavy administrative structure and lack of firm pledges may render it ineffective. They also think that its aims may be beyond the continent’s limited resources, especially given that it contains few financial commitments.

“The majority of the document talks about governing structures and their responsibilities, and very little about implementation,” says Paul van Gardingen, who studies international development at the University of Edinburgh, UK. “It’s like trying to reach Mars whilst talking about who is responsible for designing the hot-air balloon to take you there.”

Africa’s research-publication output is small, but growing faster than the world average. The share of global scientific papers with at least one African author went from 1.2% a year in 1996 to 2.3% in 2012, with the number of such papers quadrupling from about 12,500 a year to 52,000.

STISA, which is likely to be signed off during this week’s AU summit in Malabo, Equatorial Guinea, aims to turn this intellectual capacity into a “tool and enabler for achieving continental development goals”. But the document, drafted by the AU and a group of African science policy-makers, does not give much detail on how this vision will be achieved. 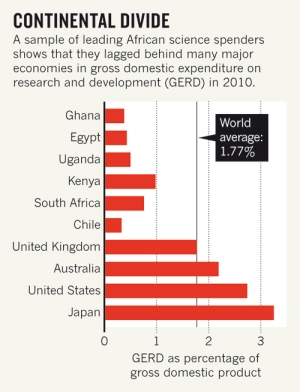 It mentions the need to invest in new laboratories and other infrastructure, expand graduate and technical training programmes and create an “enabling environment” for technology transfer. But it does not commit governments to concrete spending or training targets. Nor does it provide a budget, indicating only that funds need to be sought from both inside and outside Africa. It reiterates a near-decade-old ambition to raise AU member states’ spending on research and development to 1% of gross domestic product — a target that few have achieved (see ‘Continental divide’).

Success of the strategy will depend on the quality of research projects in individual countries. To help scientists to gain domestic support for research programmes, STISA plans to set up a research and innovation council that will bring together academies and funders to coordinate national activities. It will also take control of a European Union-funded competitive granting scheme that has spent almost €14 million (US$19 million) on research projects in water and sanitation, agriculture and energy.

Critics ask whether the new council is necessary. “The current structures look very top-heavy and could be far too expensive for the limited investments likely to be realized in the early years,” says van Gardingen.

John Mugabe, a technology-studies specialist at the University of Pretoria in South Africa, is also sceptical. “I would prefer the use of existing institutions such as the African Academy of Sciences and national academies to mobilize technical expertise for programme design and implementation,” he says. But Abdul-Hakim Elwaer, director of administration and human-resources management at the African Union Commission in Addis Ababa, Ethiopia, notes that not all African countries are involved in the African Academy of Sciences, whereas all AU member states will be represented by the council.

Despite their concerns, critics agree that STISA is an improvement on its predecessor, Africa’s Science and Technology Consolidated Plan of Action (CPA). Launched in 2005 and adopted by the AU in 2006, it established the competitive research grants scheme and several networks of research excellence. But a review in 2013 found that the CPA had failed to link with other pan-African policies, such as continent-wide agriculture and environmental-protection projects with research programmes of their own. It also fell short of raising the funds needed for its full implementation.

Mugabe, who helped to spearhead the CPA, expects funding to be a problem for STISA, too. “It fails to address the big issue, which is the financing of science, technology and innovation in Africa by African governments,” he says. The absence of commitments mean that heads of state will probably adopt it without much debate, he adds, and governments will be able to ignore it easily thereafter.

Daan du Toit, head of international cooperation and resources at South Africa’s Department of Science and Technology, is more positive. He says that the CPA generated political support for science that paid off in the continent’s successful bid to co-host the Square Kilometre Array, a US$2-billion radio-telescope project being built in South Africa and Australia.

The latest strategy will provide a similar political basis on which to build future partnerships, he says. “STISA will be a very strong mandate. You can squabble about the detail, but the overall vision is most important.”