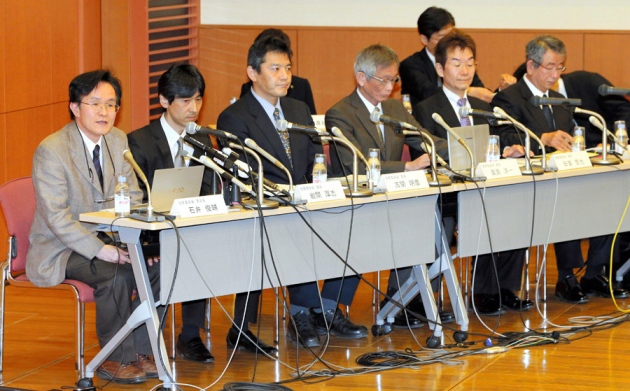 Four of the six members of a Japanese committee that found misconduct in studies claiming to demonstrate a simple technique to produce stem cells are now facing allegations of irregularities in their own published work.

The allegations complicate an already murky controversy over the technology, known as stimulus-triggered acquisition of pluripotency (STAP). Stem-cell biologist Haruko Obokata of the RIKEN Center for Developmental Biology in Kobe, Japan, described in two Nature papers published on 30 January1, 2 how she and her colleagues had reprogrammed mouse cells into stem cells by soaking them in acid or applying physical pressure.

Within weeks, numerous problems with the papers surfaced, including manipulated and duplicated images. On 1 April Obokata was charged with misconduct by a RIKEN investigative committee comprising five scientists and a lawyer. Obokata appealed the judgement on 8 April, and the committee was given 50 days to consider that appeal. On 6 May, the Japanese media reported that the investigative committee decided to deny Obokata's request for a re-examination. Obokata can no longer appeal the finding through the organization's appeal system. RIKEN will now begin the process of deciding penalties to Obokata and her co-authors.

On 25 April, the head of the investigation committee, Shunsuke Ishii, resigned from the committee after manipulated images from two of his earlier papers were posted on the Internet. Ishii maintains that neither of the problems amount to fraud, and he posted photos from the original laboratory notebooks to support that point. RIKEN launched a preliminary inquiry into his papers.

More trouble arose for RIKEN on 30 April, when a whistle-blower alleged problems in the images of papers co-authored by two other RIKEN researchers on the committee, Haruhiko Koseki and Yoichi Shinkai. RIKEN launched a preliminary investigation into the allegations that same day. Satoru Kagaya, a RIKEN spokesman, says that the whistle-blower, whose name RIKEN will not reveal, alleges that four papers from Koseki, published between 2003 and 2011, and one paper by Shinkai, published in 2005, contain data that were manipulated in one or two spots.

Meanwhile, also on 30 April, a journalist from the daily newspaper Asahi Shimbun notified Tokyo Medical and Dental University of allegations regarding Tetsuya Taga, the university's vice president and another one of the RIKEN panel investigators. Two papers on neural stem cells co-authored by Taga, from 2004 and 2005, each had two illustrations that, the journalist said, appeared to be manipulations.

Obokata’s lawyer has stated that the problems in the committee members' papers are akin to those found in Obokata’s — errors, but not fraud.

Masahiro Kami, a cancer researcher at the University of Tokyo who also researches the communication of biomedical science, sees a difference between the types of problems that surfaced in Ishii’s papers and those found in Obokata’s. He says that, for example, Obokata’s inability to produce data to explain some problems in her papers could be a factor in judging the papers differently. “To decide whether it is fraud, one has to look more comprehensively,” he says.

The RIKEN spokesman says that the allegations against the committee members will not affect the committee’s decision concerning Obokata’s appeal, expected by the end of this month.

The frenzy of accusations in the wake of the STAP problems has also ensnared Nobel laureate Shinya Yamanaka, a stem-cell scientist at Kyoto University. On 28 April, Yamanaka fended off suspicions that one of his papers from 2000 contained manipulated images — accusations that first surfaced on the Internet in April 2013 — but he apologized for not having laboratory notes that backed up the experiment.

On 25 April, RIKEN president Ryoji Noyori instructed all of the institution’s 280 principal investigators to review all of their papers, which will add up to tens of thousands. (The institute says that it publishes 2,500 papers per year.)

Kami worries that researchers will not be sufficiently motivated to report on flaws in their research, but he thinks that the extra push by RIKEN, along with the threat that those who do not find their own errors will be exposed anyway, could put the institution at the forefront of a discussion about cleaning up scientific literature. “I don’t know any research institute in the world that’s reacted so quickly and thoroughly [to allegations of misconduct],” says Kami. “Usually the researcher is just fired. RIKEN is setting an excellent precedent.”

Due to an editing error, an earlier version of this article referred to Tetsuya Taga as the president of Tokyo Medical and Dental University; his title is vice president.