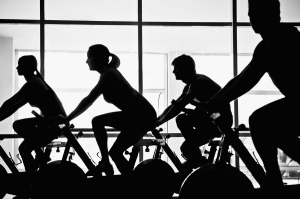 Chemical groups are removed from certain regions of the DNA during exercise.

It is not just pounds you stand to lose when you hit the gym — your DNA also loses chemical modifications in the form of methyl groups, according to a paper published online today in Cell Metabolism1. Moreover, a similar effect is seen in cells given a high dose of caffeine, hinting at a possible trigger for the process.

The presence (or absence) of methyl groups at certain positions on DNA can affect gene expression. Juleen Zierath of the Karolinska Institute in Stockholm and her team looked at the methylation status of genes in small biopsies taken from the thigh muscles of healthy young adults before and after a stint on an exercise bike. They found that, for some genes involved in energy metabolism — such as PGC-1α, PPAR-δ and PDK4 — the workout demethylated the promoter regions, stretches of DNA that facilitate the transcription of particular genes. Genes unrelated to metabolism remained methylated.

The amount of demethylation at PGC-1α, PPAR-δ and PDK4 depended on the intensity of the exercise, with muscle biopsies from individuals who had cycled the hardest showing the greatest gene demethylation.

The findings will come as a surprise to many researchers in the field. “Once a cell becomes an [adult] cell type, let's say a muscle cell or a fat cell, it is generally thought that DNA methylation is stable,” says Ronald Evans, a molecular biologist at the Salk Institute for Biological Studies in La Jolla, California. “What Juleen is showing is that acute exercise changes the methylation status of the genome in actual muscle cells.”

Methylated DNA is generally associated with genes for which expression has been switched off. “When a promoter is heavily methylated,” Zierath explains, “that may somehow make it less accessible to transcription factors” — proteins that control the expression of one or more genes. In this way, Zierath says, methylation can “modulate or slow down the expression of genes”. Indeed, expression of PGC-1α, PPAR-δ and PDK4 was increased after exercise. However, whether demethylation was required for these genes’ activation is not clear.

Another detail that is unclear is how the methyl groups were removed from the DNA. There are few reports of rapid demethylation in mammalian cells, and enzymes that can demethylate DNA have only been identified in the past year or so2.There is, says Evans, “a rapid evolution in our understanding of the demethylation process. It is going to be different in six months if not three.” So this paper, he says, “is right in the middle of a very exciting area”.

Although the mechanism is unknown, Zierath’s study “re-enforces the notion that DNA methylation is more dynamic than previously appreciated”, says Helen Blau, a cell biologist at Stanford University in California. “It provides another paradigm to study promoter demethylation,” she says.

The researchers did manage to elucidate one part of the mechanism — they report that the demethylation was driven by muscle contraction itself rather than by any extrinsic exercise-induced signals. They saw the same gene demethylation in isolated cultured rodent muscle induced to contract.

Furthermore, similar demethylation could be seen when cultured muscle cells were given a massive dose of caffeine. “Caffeine releases calcium from the sarcoplasmic reticulum,” an organelle found in muscles, “and it sort of mimics a contracting muscle”, explains Zierath. Calcium might, therefore, be the cellular trigger that activates the demethylation pathway, she says.

Zierath cautions that this result does not imply that drinking coffee could be a replacement for exercise. Caffeine acts mainly through the central nervous system, and to see direct effects on muscle such as those in the rodent-cell experiments, “one would need to consume a caffeine equivalent of about 50 cups per day, almost close to a lethal dose”, she says. “Exercising is far easier if you ask me.”