Laboratory heads today spend too much time struggling to win funding from the US National Institutes of Health (NIH), and this pressure to fund raise is driving young scientists away, according to a much-discussed commentary in Cell1. To address this problem, Ronald Germain, chief of the laboratory of systems biology at the National Institute of Allergy and Infectious Diseases (NIAID) in Bethesda, Maryland, argues that the NIH should make funding decisions based almost entirely on researchers’ past accomplishments, and not on their future plans for specific projects. Irakli Loladze, a quantitative ecologist at the University of Maryland University College in Adelphi, tweeted:

Sally Rockey, outgoing director of the NIH Office of Extramural Research, says the agency is already taking steps to streamline the funding process and support scientists despite an ever-tightening budget.

In his commentary, Germain suggests that all new biomedical faculty should receive start-up money that would last roughly 5–7 years. The NIH would provide that funding to individual institutions in the form of grants that they could distribute at their discretion. When it’s time for those faculty members to reapply for funding, reviewers would base 90% of their decision on the researcher’s body of work and 10% on a general description of their future plans.

Germain argues that this approach to funding could greatly relieve researchers of the burden of writing grant proposals, which, he estimates, currently takes up about 50% of a researcher’s time as opposed to 10–15% in years past. This would also allow researchers to focus on doing more new work, rather than on collecting preliminary data for the next proposal, which can lead to more conservative research.

In an interview with Nature, Germain, who clarifies that he is speaking for himself and not the NIH or the NIAID, said that he spoke with hundreds of students, researchers and faculty members while preparing his commentary. “Only one person defended the system as it exists,” he says.

Rockey says that it takes a wide variety of approaches to fund all of the different types of research that occur under the NIH umbrella. “We’re doing many experiments in that regard,” she says. She points to new awards at the National Cancer Institute and the National Institute of General Medical Sciences that provide enough long-term support to let researchers focus on their work, not the next grant proposal. Still, she says that there simply isn’t enough money to make the funding system work for everyone. “The NIH budget has been flat for 12 years, and research costs are going up,” she says. “That’s creating a lot of angst in the community.”

Leonid Kruglyak, a geneticist at the University of California, Los Angeles, tweeted: 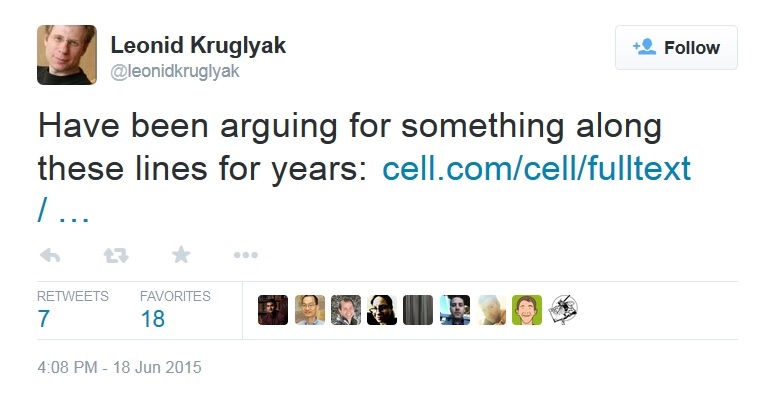 In an interview, Kruglyak said that, in his opinion, a scientist’s recent track record is a better predictor of future success than any sort of detailed proposal. Combining a reliable source of start-up money at the outset with results-based funding in the future is a proven way to support good science, he says. “That approach works very well at the Howard Hughes Medical Institute,” says Kruglyak, who is funded by the institute based in Chevy Chase, Maryland.

Not all online commenters were sold. Matthias Piesche, a cancer researcher at Aarhus University in Denmark, tweeted, “CV more important than research proposal? Who says past success’ll be repeated?”

In a blog post, an NIH-funded researcher who writes under the name Drug Monkey, wrote that this scheme, by his calculations, would severely limit the number of assistant professors who could get this kind of funding, unless the NIH saw a massive increase in its budget. “In the real actual non-fantasy world, that would come with some serious constraints on who can be a scientist,” he wrote.

Germain acknowledges that there’s no perfect way to make sure that every deserving scientist gets funded. “My goal is to create an even playing field based on real accomplishments,” he says.